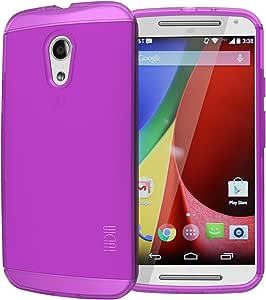 grumble
5.0 颗星，最多 5 颗星 The Best You'll Get at this Price!
2014年10月7日 - 已在美国亚马逊上发表
已确认购买
I was quite surprised with the quality of this product. I had initially bought two of these cases as placeholders of sorts until some of the bigger brands came out with cases for the Moto G, but the texture quality and fit around the phone has convinced me just to stick with this case for as long as it lasts.

The material is very smooth and most of the case has a very nice feeling matte finish. Only the top and bottom has that slick plastic feeling but even I don't see that as much of a problem.

It offers slight drop protection, definite protection from scratches and scuffs on the majority of the device, and the front bezel features a tall lip so you can place the phone face down worry free.

The colors look exactly as they do in the image. I purchased the black and teal versions for my parents and they also seem quite happy with them.

Sarah
5.0 颗星，最多 5 颗星 I love this case
2014年10月5日 - 已在美国亚马逊上发表
已确认购买
I love this case! I ordered my Moto G the day it was released and I immediately starting looking for a case. There are very few cases available right now for the second generation Moto G due to it's recent release just last month. I am glad I found this case. This case has exceeded my expectations and I am really glad I ordered it! It fits the phone perfectly. It is made out of TPU so it is flexible but firm and sturdy. The cut out for the charging port is generous so the micro usb fits perfect. There are no cut outs for the power and volume buttons but the buttons are still pretty responsive and I don't feel that I have to press extra hard. The headphone jack fits perfect. One of the reasons I really love this case is that the back of this case feels very soft like the back of the Moto G. This case is nearly identical in texture to the Moto G and it feels really nice to hold. The top, bottom, and sides are trimmed in glossy black TPU (if you ordered black) which gives nice visual interest to the design. I also like that this case is slim and does not add bulk to the phone. This case is more than adequate to protect your phone from scuffs with ordinary use. It feels sturdy and well made. This case is a bargain for the price!
阅读更多
45 个人发现此评论有用

Shaun of the bed
5.0 颗星，最多 5 颗星 Good case
2016年1月16日 - 已在美国亚马逊上发表
已确认购买
Nice, simple, case that fits very well and provides some protection for your phone. I'm used to having more robust cases like the otterbox commuter or defender but they don't appear to make one for my Moto G 2nd gen so I picked these up for my wife and I. We've both dropped our phones from about waist height and nothing on the phones broke or cracked. The button covers don't hinder button presses like another Tudia product I used. The finish on the case is attractive and simple, the back is kind of frosted instead of being clear and I think that makes it look rather nice. The case slides in and out of you pocket with ease and isn't too bulky at all. What else can I say? I have bought two of these cases and so far and like them.
阅读更多

Martin Sisk
4.0 颗星，最多 5 颗星 Great if you get it on sale, but not worth the list price
2015年1月13日 - 已在美国亚马逊上发表
已确认购买
I purchased this case with my Moto G because Amazon suggested it. Functionality wise it does exactly what I'd want from a phone case; the buttons are still as responsive as you'd want and the casing doesn't get in the way of the headphone jack, camera, LED flash, or micro USB port. It hugs the rest of the phone pretty well, so it doesn't ruin the feeling of the phone in your hand nor make it feel about four times thicker than before like some other cases I've used in the past. The corners of the phone are well-protected especially since the top and bottom use a bit of a harder plastic than the back and sides. Fortunately using this harder plastic doesn't ruin the feeling of holding the phone up to your ear while in a call, though you can still definitely feel it and I wouldn't call it comfortable. The case is a bit difficult to remove once it's put on since the top and the bottom are not nearly as flexible as the sides, though this could be both a pro and a con since it won't come off accidentally.

From a design perspective, this case is pretty much exactly what you'd want from a minimalist case. The entire case is pretty translucent, though the hard-plastic top and bottom are more transparent than the rest. I enjoy how the Motorola logo on the back of my phone is still visible through the case, and I also like the subtlety of the TUDIA company logo, which if you weren't looking for it you probably wouldn't notice. The one thing I will say is from the picture on Amazon I was expecting something more on the powder blue side of teal, but the case is actually more of an aqua. Of course, this could be a result of my black Moto G giving the case a different hue than the white one in the picture.

I gave it a four out of five mostly because while I purchased this case for around $10, the list price is nearly $40. This case is great, but I feel that there are much better or even equivalent options for significantly cheaper than $40. If I would have paid that much for this case I almost certainly would have left a much more negative review. For what I paid, though, this is certainly a good option.
阅读更多
1 个人发现此评论有用

Muldoon
5.0 颗星，最多 5 颗星 Great streamlined design.
2016年4月16日 - 已在美国亚马逊上发表
已确认购买
As other reviewers mention, it fits perfectly. One thing to be aware of is that due to its tight fit (you want it that way) the edges slide over the screen and can interfere with a screen protector so you need to be careful. I fit one side in then worked it around (it helps if the cover is warm) the screen and it did not push on the edge of the protector. The corners are made of a soft but rigid vinyl that will not only protect form dings but absorb the shock of impact.
阅读更多
加入亚马逊Prime，从此免运费
亚马逊Prime会员可享海外购美/英/日/德跨境免邮，全年无限次！更有免费无限次阅读电子书服务
> 立即加入
了解我们
合作信息
帮助中心和购物指南