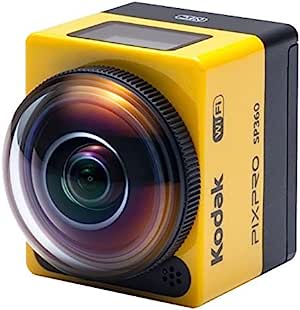 Jose Koenig
5.0 颗星，最多 5 颗星 Delivers what it promises after figuring out how to properly use.
2018年4月17日 - 已在美国亚马逊上发表
款式: Extreme Accessory Pack已确认购买
After I figured out how to properly share and render pictures and videos correctly in Google photos, facebook and youtube, I realized this is a good choice. The camera itself delivers what it promises. It is required to have a full 360 picture or video in order to share it in facebook, google or youtube. Some reviews incorrectly point to the lack of quality of the picture or video once it is uploaded to facebook or youtube; I say incorrectly, because the video or picture taken with this camera it is of good HD quality. The problem is when the video or picture is uploaded to one fo those services because those websites usually compress your file and in the process, the quality of the file is degraded. These websites do this so that are optimized for rendering on their websites and or use less space on their servers.

A full 360 is a full sphere, not half a sphere and this camera can only take half spheres (dome mode). Full sphere pictures (photospheres) can be easily obtained with this awesome camera by using a tripod, take one half of the sphere, then rotate 180 degrees the camera, take the other half, then stitch them together using Kodak's free software. Then you can export the stitched picture and upload it to your favorite social media website.

A similar principle applies to video but it is a little more involved. For video, if only using one camera, one hemisphere can be shot and then stitch it to another of equal length in time in black and no sound. In this way, the video can be rendered properly in youtube or facebook. The resulting video is a 180 degree FOV. The other option for full 360 videos, is to buy the dual Kodak camera adapter, and use two Pixpros then film on both at the same time with a front-back lens configuration and stitch the resulting videos together for a full 360 video.
Note the new lower price of this camera; with two of these, we get a well rounded set of equipment for a very low price. This dual configuration is better than the Theta SC in terms of video capacity since the Kodak you can put a 32GB SD card in it and this configuration is similar in price.

The camera also has the ring, panorama, front and segment modes. Up to now I have only described how to take pictures in 360 using the dome mode. As for the other modes, they are cool, but in my case I would only use either the dome mode for 360 media or the front mode for filming action movies on a bike or car.
All in all this camera is fun to use. One bad thing I found is that I noticed a blue edge while taking pictures in cold temperatures.
I used both the free software that can be downloaded on their Kodak website and the android app. Both work well, not perfect but both do what I care only to do. With the Kodak PC software I am able to process my media for sharing. With the android app, I am be able to set the mode press the shutter button via my smartphone.

Rick
3.0 颗星，最多 5 颗星 Be Careful About Your Intended Purposes
2020年2月14日 - 已在美国亚马逊上发表
款式: Extreme Accessory Pack已确认购买
We needed a camera that could be in a fixed position to record a rectangular space to the front and then allow for immediate feedback.

This camera is well built but is truly designed as a 360' camera angle, an idea I find a bit gimmicky and wholly unfit to our purposes. We erred in thinking that you could use this camera as a standard lense setting as well.
阅读更多
2 个人发现此评论有用

This_Guy
5.0 颗星，最多 5 颗星 very cool!
2015年7月29日 - 已在美国亚马逊上发表
款式: 360-degree Horizontally, 214-degree Vertically Doom Lens已确认购买
really nice if you know what to expect, yes the quality on the 360 degree videos is not fantastic but people forget that it is a large video and it needs to wrap around so quality will take a hit. It is very cool, especially when uploaded to youtube. One thing about this that people may not like is that to save the video for use on youtube, you need to record it at 1 to 1 speed, so an hour long 360 degree video takes an hour to export, though to me this is not really a deal breaker at all. The front facing video is nice quality, and it has a super wide angle which is nice, it also has the option to record at a much lower resolution but at 120fps that plays back in slow motion. Seeing all the features of this camera it is definitely worth the money, especially seeing as the next best camera (ricoh theta) cost almost twice as much and doesn't give you the option of using it as an action camera and does not have any other features making it essentially a one trick pony. With the kodak if you don't like the 360 degree video then you can use it like a gopro. If you want to see how the 360 degree video s look search "sp360" on youtube and set the filter to show 360 degree videos only, but you need to use google chrome or an android phone, it also works with google cardboard type devices!
阅读更多
3 个人发现此评论有用

Steve
3.0 颗星，最多 5 颗星 A good camera with bad support team
2015年7月20日 - 已在美国亚马逊上发表
款式: 360-degree Horizontally, 214-degree Vertically Doom Lens已确认购买
This KODAK SP360 is a good camera. Of all the 360 degree cameras on the market, it delivers adequate quality video (or picture) and gives users the software to view footage in many angles.

But, the tech support is near non-existence. The company behind this camera is not KODAK; it's a company called JK Image. When I contacted JK Image for technical support, I waited 3 days to get a response. The problem is not resolved (I cannot connect my computer to the camera by USB or WiFi). I downloaded user manual and read it from page 1 to index but there is still no answer to the problem.

By the way, the LCD and the menu on this camera is not very intuitive. I actually have to learn the symbols, menu trees and what to do when I want certain settings after studying the user menu for 4 hours.

In summary, this is a good camera with KODAK picture quality. Too bad KODAK is not willing to support it from home office; they outsourced this task to a company (JK Image) that did a poor job.
阅读更多
5 个人发现此评论有用
加入亚马逊Prime，从此免运费
亚马逊Prime会员可享海外购美/英/日/德跨境免邮，全年无限次！更有免费无限次阅读电子书服务
> 立即加入
了解我们
合作信息
帮助中心和购物指南