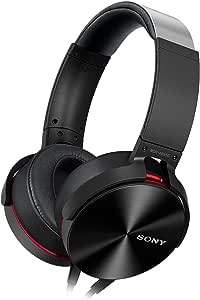 TC
5.0 颗星，最多 5 颗星 They are great, but I think they are the more expensive Japanese import version of Sony MDRXB950AP/H
2016年12月31日 - 已在美国亚马逊上发表
已确认购买
These are great, comfortable, and sound amazing, as everyone says. I wanted something that would have rich tones and bass. Best sounding headphones i've ever owned, for sure, though I've never owned anything over $30. The cable is short is a flat cord, so it doesn't tangle. I specifically wanted a corded headphone cause I didn't want to deal with charging up, or having to constantly pair to different devices, as I use this with 4 different devices. I like to sit or lay down when using them, so didn't need mobility.

Here's the problem though: These came in Japanese packaging and not regularly available in the USA. This leads me to believe the $90 price tag is primarily due to this reason. I have read the specs for the Sony MDRXB950AP/H which are also extra Bass headphones, at the 950 level. It also comes with a microphone. It is only about $55. My guess is that they are basically the same sound, but made for the US market. If you want to save yourself about $30, and get the same thing + an inline microphone, go for those.

These really are nice headphones though.

Matt & Katy Yanossy
5.0 颗星，最多 5 颗星 The right headphones for me!
2017年7月7日 - 已在美国亚马逊上发表
已确认购买
I was able to listen to the Sony MDR-XB950BT (Bluetooth version) that has the option for "bass boost" at a Best Buy a few days before these arrived and I was worried that the wired pair wouldn't have enough bass for my liking. I have had the 950AP headphones for 1 day and decided that I needed write a review while it's fresh on my mind and maybe compare the two a bit. The "bass boost" feature on the 950BT really adds some SERIOUS bass and the only other headphones that I have heard that match the bass level or at least comes close is the Skullcandy Crusher. With all that said, I absolutely love the 950AP headphones. Yes, they are wired headphones and yes they may not have the same options as the 950BT (mic on wire is about it) but they match what I wanted and needed. Doable price, quality sound and no need for charging. I would recommend these to anyone who is considering the 950BT and would rather save a few bucks. The 950BT are definitely a step up but the 950AP is perfect for what I wanted and needed.

Just to add.. I wanted a pair of headphones that I could use on my PS4 and also on the go. The Bluetooth headphones that I already have will not connect to my PS4 but my 950AP's are wired ;-).
阅读更多
11 个人发现此评论有用

steven
5.0 颗星，最多 5 颗星 Blown away at the sound quality.
2019年4月6日 - 已在美国亚马逊上发表
耳机款式: Without Bluetooth已确认购买
EDIT: As much as I loved these for the bass, comparing to some other brands, they have a lot of missing "detail" in the upper range. I had googled as performance graph in terms of how they perform, from 20hz to 20,000hz, and then used that graph to bring the upper end back up with my computers EQ on my sound card. This allows them to sound a but better. I also learned from that performance graph, that these are actually tuned for "literally extra bass" which I then used my EQ to lower the bass, to bring the performance of the headphones closer to neutral. Compared to other headphones, the EQ just doesn't do the upper end justice. These headphones do not like the detailed upper end. So for now these are used while traveling or in bed with my phone, while my computer I use the HIFIMAN Sundara which I have also written a review for. The HIFIMAN Sundara's are 350 bucks, they lack in bass, but you can EQ them back to a healthy degree, which means you get the super detailed upper end, and a nice punch in the low end, where as these Sony's have a super punchy low end, but absolutely no upper end detail. Even after the EQ and a simply "on off" button on said EQ, you can tell these are "watered down" in terms of sound quality overall. If you love bass, they will be amazing for you. If you want bass with good clarity, these are not for you. The big difference here is the HIFIMAN will require extra power to drive them, as in your ipod/ipad/cellphone will not sound good with the HIFIMAN, they will be really quiet, and along with being open ear, will be hard to hear in public spaces. So these Sony's are still a contender, but wanted to update so people don't get confused.

So, to start off.... I have the Sony MDR-XB50AP/L which are the "extra bass" earbuds they sell. Now for some reason earbuds seem to always cause my ears to itch, like, deep inside. Its quite, irritating. I loved the earbuds version but damn if I can't stand that ear itch. So I bought these MDR-XB950AP which are essentially the over ear version of the earbuds. You can tell by the similar name scheme.

Okay. So I play video games, avid music love. First off, music. Comparing these to my old Beyerdynamic DT880Pro's, my Sennheiser PC600 (gaming headset), and my Akai Professional 50x. The Beyerdynamic are open cup so everyone and their mother can hear what you are listening to just as detailed as you, which is a problem for me these days. They sound great, but they lack bass being open ear. More for "classical" music and those wanting the purest sound. I can't adjust the bass because it distorts anything you listen to regardless of volume.... The PC600 I have to adjust to get proper bass. I end up giving them +10db at 30hz and +5db at 60hz. This gives them enough bass to fill out the bottom end, without distorting the audio. Now in general, this sound pretty damn good. However for some reason the highs are really over powering in the PC600. Which is kind of a shame, but I deal for the most part. Now when I want ridiculous bass, I wear the Akai Professional 50x, which I can jack up the bass pretty crazy. I do +24db at 30hz, +12db at 60hz, and +6db at 125hz. This causes these headphones to literally rattle your head. Which is pretty awesome. However, I needed headphones for when I was in bed, comparing to my earbuds....

So, on to the MDR-XB950AP which is what this review is for. First of all, I don't have to adjust ANYTHING to get crazy bass. Just stock these things are rattling my head which I love. Now mind you, I OVERDRIVE all my headphones. How? My sound card has a mode for low impedance and high impedance. So it can support headphones up to 600ohms which are your audiophile grade headphones. I have it set to 600ohm ALL THE TIME regardless of the cans on my head. So even with overdriving them, I still don't have to adjust anything. And they sound great. At lower volumes the bass does drown out the mids and highs a bit, but once you begin to crank them to enjoyable levels (or ridiculous loud like I do) the mids and highs come right back as if they were never missing, and you still get that crazy bass. I am I'm love with these. NOT TO MENTION, they are STUPID LIGHT WEIGHT. Its like having a feather on my head. The Beyerdynamics are generally heavy and the Sennheiser PC600 are even heavier than that.... The Akai are between these Sony's and the Beyerdynamics in terms of weight. AKA these Sony's are the lightest over ear headphones I've ever owned.

Overall I am super happy with my purchase. Bass just as amazing as the earbuds I had from sony in the same product line up, but larger, louder, and more epic. Would recommend to bass heads. I had tested them directly on my cell phone earlier and they sounded really good even then (on a first gen Pixel XL).
阅读更多
3 个人发现此评论有用

Charity Flores
5.0 颗星，最多 5 颗星 Do not buy this if...
2016年12月30日 - 已在美国亚马逊上发表
已确认购买
Again, do not buy this if you want to be distracted by your environment. If you don't want the bass hitting so hard that the headphones make your head vibrate. I bought these for my workouts and they were great! I don't know why, but I was able to get these bad boys for under $50. I would have gladly paid retail for them. They are better than Beats, unless you want to overpay.
阅读更多
13 个人发现此评论有用