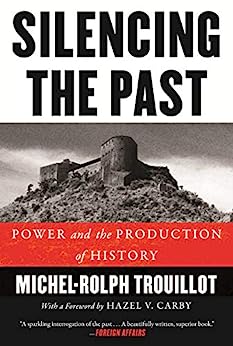 Now part of the HBO docuseries Exterminate All the Brutes, written and directed by Raoul Peck

Placing the West’s failure to acknowledge the Haitian Revolution—the most successful slave revolt in history—alongside denials of the Holocaust and the debate over the Alamo, Michel-Rolph Trouillot offers a stunning meditation on how power operates in the making and recording of history.

This modern classic resides at the intersection of history, anthropology, Caribbean, African-American, and post-colonial studies, and has become a staple in college classrooms around the country. In a new foreword, Hazel Carby explains the book’s enduring importance to these fields of study and introduces a new generation of readers to Trouillot’s brilliant analysis of power and history’s silences.
阅读更多
Previous page
Next page
Kindle 电子阅读器
Kindle Fire 平板电脑
免费的 Kindle 阅读应用程序
查看所有受支持的设备
›  查看更多商品促销信息

T-man
5.0 颗星，最多 5 颗星 A very important read
2022年4月21日 - 已在美国亚马逊上发表
已确认购买
This book is very important and understanding much for what goes on today with the bending of history and accommodating facts to meet a certain purpose. The book is well organized, well documented and challenge of us to see the pass and act upon it in the present
阅读更多

K-Pop Fan
2.0 颗星，最多 5 颗星 A Few Insights Buried in a lot of Pretentious Drivel
2021年2月3日 - 已在美国亚马逊上发表
已确认购买
Going through graduate school in history in the 1990s, one was forced to read way too many books like this one. Incorporating "insights" from literary theory, critical studies, anthropology and the like was all the rage. Quote Foucault, bury your book in dense, impenetrable prose, champion the cause of downtrodden "others" or "subalterns" and you had academic gold. Much of it was full of sound and fury, signifying nothing. But the writers of these blights on the production of knowledge loved citing each other and telling each other how great they were. This book is very much of the time period and like those books, it hasn't aged well, but the latte left will still claim it's somehow wonderfully insightful. It is badly written, poorly argued and pretty dull. The chapter introductions are especially insufferable and pretentious. And hilariously the author somehow thinks he's writing for undergraduates. Really? It's certainly true that the intellectual level and ability to read of the average college student has declined precipitously in the last couple decades, but even students in the 90s would not have understood or appreciated this. His presumption that undergrads are conversant in the basic parameters of French history is in itself a manifestation of the "privilege" he wants to rail against.

There are, to be sure, a few relevant points about the problems of memory and how popular culture and perceptions influence the popular understanding of history are found buried in the generally awful prose. But this could have been much better as an article. Definitely not recommended for undergrads. Even grad students will find it hard going unless they are specialists in Haitian history.

Marisa Pickett
5.0 颗星，最多 5 颗星 Yep. It's good.
2021年12月1日 - 已在美国亚马逊上发表
已确认购买
A good read that tackles history, memory and a reckoning with colonialism and slavery. It introduces each topic and engages the reader with difficult questions. Almost 20 years later and it is still relevant.
阅读更多
1 个人发现此评论有用

Nico Vela
4.0 颗星，最多 5 颗星 An excellent look at the production of History
2018年8月11日 - 已在美国亚马逊上发表
已确认购买
Well written. This book was purchased for a class on the Archive, and it was one of the best ones I had the pleasure of reading. Silencing the Past shows a well known, but often undiscussed part of history: How the Victors can write the past to reflect good on themselves. It shows a new political side to the production of history. Admittedly, this book can be hard to get through at times, but it is well worth it.
阅读更多
19 个人发现此评论有用