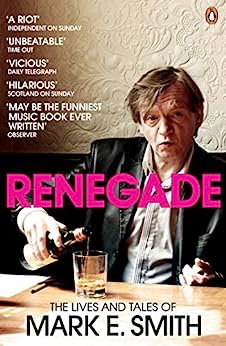 The only way to appreciate the legendary musician Mark E. Smith is to encounter the man in his own words.

'May be the funniest music book ever written' Observer

The Fall are one of the most distinctive British bands, their music - odd,spare, cranky and repetitious - an acknowledged influence on The Smiths, The Happy Mondays, Nirvana and Franz Ferdinand.

And Mark E. Smith IS The Fall.

47 members have come and gone over the years yet he remains its charismatic leader, a professional outsider and all-round enemy of compromise, a true enigma. There have been a number of biographies of the legendary Smith, but this is the first time he has opened up in a full autobiography.

For the first time we get to hear his full, candid take on the ups and downs of a band as notorious for its in-house fighting as for its great music; and on a life that has endured prison in America, drugs, bankruptcy, divorce, and the often bleak results of a legendary thirst.

'A riot' Independent on Sunday

Wayne M. Kukse
5.0 颗星，最多 5 颗星 RENEGADE: The Lives and Tales of Mark E. Smith
2009年12月30日 - 已在美国亚马逊上发表
已确认购买
At the very least this book is a must for all Fall fans. For all of the line up changes over the years, the one constant is Mark E. Smith. Over the years I have always read what a jerk he was, w/ no words to the contrary from him. Finally the final word from the man himself. Their place as one of the greatest bands ever already cemented. The book is a heady stream of conciousness filled w/ comical personal attacks. No person, concept, or institution is safe from this caustic wit. For every blast to one (whose fault it always is) that Mark felt crossed him, there are also kind (Mark E. Smith kind) words for those who supported him. For a self avowed socialist, Mr. Smith comes across conservative in many ways, such as marriage, family, and work ethic to name but a few. Mr. Smith is convicted in all of his beliefs, even if they sometimes contradict themselves. He seems to have no regrets. You will not get much insight into any of the Falls material, or Mark E. Smith, the man himself really. What you will get is a thought provoking rant on a myriad of subjects, recommendations on books that I,for one have taken up and found to be right on in their recommendation. Far more laughs than in your average biography, or any other book for that matter. Another man out of his time, a ribald original. I can't recommend this book enough.
阅读更多
16 个人发现此评论有用

Rex Freeman
3.0 颗星，最多 5 颗星 Not as funny or interesting as it thinks it is.
2022年8月21日 - 已在美国亚马逊上发表
已确认购买
Sure, the drunken exaggerations and spiteful ramblings are Mark all over, but it seems pretty certain now that a book that provides insights into the artistic mind of the greatest genius in rock music is never going to transpire...we have the records at least, and the Spotify lyrics online. If you're after his ascerbic and confused review of the Friends tv series though, this is for you. But we're never going to learn what made one Fall version of a song, with its shifts and nuances from studio to radio session to stage, different from another. Deliberate or organic? We'll never know.
阅读更多

T. Bryant
4.0 颗星，最多 5 颗星 Four Stars
2016年2月3日 - 已在美国亚马逊上发表
已确认购买
I quite enjoyed this. Funny at times. Certain meanderings and rebuttals felt like they were necessary for MES.
阅读更多
1 个人发现此评论有用