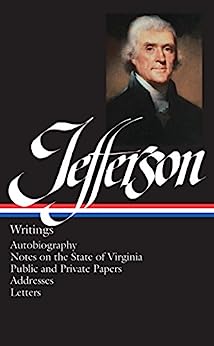 At the moment of our nation's birth, Thomas Jefferson defined the issues that still direct our political life. Displaying his extraordinary variety of interests and powerful and precise style, Jefferson’s writings are an invaluable and incisive record of the landscape, inhabitants, life, and daily customs of America in the Revolutionary and early national eras.

This book is the most comprehensive one-volume selection of Jefferson ever published. It contains such famous works as "Autobiography" and "Notes on the State of Virginia." A series of addresses, 287 letters, and public and private writings—including the original and revised drafts of the Declaration of Independence—round out the collection, painting not only a portrait of the early days of America but of one of the most influential and controversial figures in our nation's history.

LIBRARY OF AMERICA is an independent nonprofit cultural organization founded in 1979 to preserve our nation’s literary heritage by publishing, and keeping permanently in print, America’s best and most significant writing. The Library of America series includes more than 300 volumes to date, authoritative editions that average 1,000 pages in length, feature cloth covers, sewn bindings, and ribbon markers, and are printed on premium acid-free paper that will last for centuries.
阅读更多
Previous page
Next page
由于文件较大，下载时间可能较长。
›  查看更多商品促销信息

Brian Mumford
5.0 颗星，最多 5 颗星 A call for action.
2016年7月31日 - 已在美国亚马逊上发表
已确认购买
This is one of the most important books in the world in my opinion. I wish they published all of Jefferson's writings. History has been rewritten, and Jefferson pointed out that even Washington misrepresented the facts. He would also go on to discuss what he discovered about Washington and his circle of friends both within and without his administration. Here's an excerpt from one of his writings:

"I returned from that mission in the 1st. year of the new government, having landed in Virginia in Dec. 89. & proceeded to N. York in March 90. to enter on the office of Secretary of State. Here certainly I found a state of things which, of all I had ever contemplated, I the least expected. I had left France in the first year of its revolution, in the fervor of natural rights, and zeal for reformation. My conscientious devotion to these rights could not be heightened, but it had been aroused and excited by daily exercise. The President received me cordially, and my Colleagues & the circle of principal citizens, apparently, with welcome. The courtesies of dinner parties given me as a stranger newly arrived among them, placed me at once in their familiar society. But I cannot describe the wonder and mortification with which the table conversations filled me. Politics were the chief topic, and a preference of kingly, over republican, government, was evidently the favorite sentiment. An apostate I could not be; nor yet a hypocrite: and I found myself, for the most part, the only advocate on the republican side of the question, unless, among the guests, there chanced to be some member of that party from the legislative Houses."

In my opinion, this book should be mandatory reading in classrooms throughout the country if not the world, and we should pressure the Library of Congress (Congress), the University of Virginia, the Massachusetts Historical Society, and the more than 900 different repositories to digitize and make available to the general public every word of Jefferson's writings, because I believe there are a lot of things our government is suppressing. For example, I guarantee he had more to say about Judicial Review, Washington's administration, and the Second Amendment than we have access to. The repositories I mentioned have the largest collections, and I recommend everyone write them to compel them to make available all of Jefferson's works. When you rank the books from the Library of Congress on Amazon, Jefferson is not among the first pages and that is astounding to me. This book is so important I have it both on Kindle and hardcover in my library.

M. Dave Salisbury
5.0 颗星，最多 5 颗星 Great Mind!
2022年8月3日 - 已在美国亚马逊上发表
已确认购买
I love these books and have a majority of them in hardback. As I have struggled health wise, I have looked for them on Kindle and am thrilled! Holding a hardback book is becoming more difficult, and I appreciate these excellently written resources at my fingertips. - Jefferson is one of my favorite forefathers for his intuitive mind.
阅读更多

H. L.
5.0 颗星，最多 5 颗星 Excellent Value!
2022年3月21日 - 已在美国亚马逊上发表
已确认购买
I bought this for my dad, who was amazed at the value of this book. It's very thick and heavy, with a quality binding. I don't know how they print such a large book for so cheap. If you want to read Thomas Jefferson, this book is great! All the important writings together in one volume.
阅读更多
1 个人发现此评论有用

&amp;amp;amp;#34; Anti Microchip &amp;amp;amp;#34;
4.0 颗星，最多 5 颗星 A glimpse into the mind of Jefferson
2010年2月18日 - 已在美国亚马逊上发表
已确认购买
First, let me start with my qualifications. I am not a history major, and my knowledge of American history is not where I would like it to be. That being said I'm sad to say that I know more than most people I run into. Sure many people have memorized dates, and can recite historical trends from memory because they had to learn it for some exam. That is not what I'm talking about!! You have to read their words, think about the times they were living in, and hardships they had to endure to give us the freedoms many of us enjoy today.

I am about a hundred pages into this massive volume of Jeffersons works, and it will take me a few years to get through it (I have other interests). However, from what I have read thus far I am very much impressed with it. Jefferson was a very strong personality who walked out on what he believed to be right. We as a nation would do well to elect a man like him into office (if you can find one). This is a man who would have gladly died for what he believed in (no really stop and think about what that means). I doubt you could find one politician in Washington who would do the same today. This is truly a teasure chest of history for those who seek to understand the history not just memorize facts.
阅读更多
18 个人发现此评论有用

Not a classic book, though: it is a compilation of many of the letters that Thomas Jefferson wrote during his long life.

My only regret here, is that many of these letters, are reply to other letters.
And it would be great to have, in either the same book, or another books, the "Letters to Thomas Jefferson" to better understand the topic, the whole story! Ideally, and easy cross-reference would be available!

There are a few letters, that I especially recommend to my friends, but it is better if you find them on your own!

I hold Thomas Jefferson Writings in such esteem, that I offered several copies (four so far) to my friends.

Thomas Jefferson is also a great bridge between European and American philosophy, wisdom... or lack of it!

This book, should be on your bookshelf, next to: