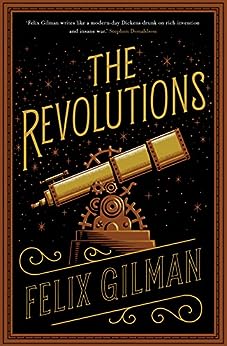 "Gilman's descriptive powers are as economical as they are vivid, beautifully capturing the spirit of fin de siècle society."―NPR

FELIX GILMAN has been nominated for the John W. Campbell Award and the Locus Award for best new writer. He is the author of the critically acclaimed Thunderer, Gears of the City, and The Half-Made World, which was listed by Amazon as one of the ten best SF/F novels of 2010. He lives with his family in New York City.

K. Hulse
4.0 颗星，最多 5 颗星 Good reading
2014年6月16日 - 已在美国亚马逊上发表
已确认购买
This was a good fantasy retro back to an earlier England full of magic and sorcerers. It kept me interested through to the end. I just wish it had a better ending. I felt like it just dropped off without a satisfactory conclusion. The writing is very good though
阅读更多
2 个人发现此评论有用

Michael M. Hughes
5.0 颗星，最多 5 颗星 Pure fun with a goodly dash of esoteric history
2014年6月3日 - 已在美国亚马逊上发表
已确认购买
As someone with a longstanding fascination with The Hermetic Order of the Golden Dawn, the enormously influential 19th Century secret occult society, I enjoyed this novel enormously. Gilman captures the era and the historical material wonderfully then takes it into the stratosphere and beyond (quite literally *way* beyond). It's a deft mashup of many genres and the author pulls it off with aplomb. An absolute treat--fast-paced, imaginative, and engaging.
阅读更多
4 个人发现此评论有用