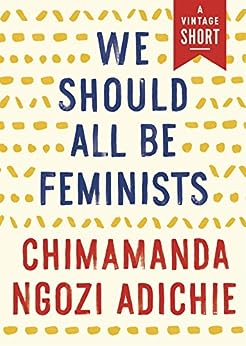 In this personal, eloquently-argued essay—adapted from the much-admired TEDx talk of the same name—Chimamanda Ngozi Adichie offers readers a unique definition of feminism for the twenty-first century. Drawing extensively on her own experiences and her deep understanding of the often masked realities of sexual politics, here is one remarkable author’s exploration of what it means to be a woman now—and an of-the-moment rallying cry for why we should all be feminists.
阅读更多
›  查看更多商品促销信息

Kristen S
1.0 颗星，最多 5 颗星 I've read (much) better
2018年10月18日 - 已在美国亚马逊上发表
已确认购买
I personally thought this book was terrible... at least the first 3/4 of it, because that's all I could get through. It's probably my fault, but I expected it to expand on the reasons why we all need to be feminists. The author gives scenarios of where something has happened to slight women or girls, but goes no further with it. The book was more of a downer to me than it was inspiring. If you are a woman, you KNOW what it's like to be made to feel like you're less than... we don't need to hear more stories. Even if you don't.... or won't let it get to you, there has almost always been at least once where this has happened (especially when it first does). Now, if the book changed in the last 1/4, my review still stands. I read through most of it and got nothing (thus, wasted my time).

I would have liked the book to be more pro-active, to give girls and young women an arsenal of weapons that'll soften the blows when, unfortunately, insults come their way. I kept hoping it would get better, but it didn't... We need to continue to stay strong and keep fighting our way through life, until we are equal. Getting equal pay and to be BELIEVED would (should) be the first things on the list.

Bursar
1.0 颗星，最多 5 颗星 Where's the rest?
2018年9月3日 - 已在美国亚马逊上发表
已确认购买
This is not a book, it's a brochure. It's tiny. All the arguments are based on the author's interpretations of awkward social situations in Africa and not on any theory or history or methodology or anything but what she assumed went on in other people's heads at various times in her life. Don't waste your time, although there is so little text to read it wouldn't waste much.
阅读更多
37 个人发现此评论有用

Bbooks
5.0 颗星，最多 5 颗星 Offers wisdom but is not preachy.
2020年12月5日 - 已在美国亚马逊上发表
已确认购买
"We teach women shame. Close your legs. Cover yourself. We make them feel as though by being born female, they are already guilty of something. And so girls grow up to be women who cannot say they have desire. Who silence themselves. Who cannot say what they truly think. Who have turned pretense into an art form."

We Should All Be Feminists by Chimamanda Ngozi Adichie

For those who are not familiar with Chimamanda Ngozi Adichie, she wrote the book, "Americanah". That was a book I liked but did not love . But this short book, drew me in just by the title. It was quite interesting.

Chimamanda Ngozi Adichie is of coarse a feminist and if you have read Americanah, you likely already know that. The ideas she speaks of here are from a speech she gave which she was nervous about and that ended in a standing ovation. I can see why.

I do love books that make you think but that are not preachy. I always felt Americanah fell into the preachy category a bit to much for my comfort. But "We should all be feminists" really does not. I enjoyed this for so many reasons. I did not know much about the laws that govern her country and I was indeed shocked at some of them. I was very shocked. And many,actually most..of her ideas I agree with. There is much reflection on Gender and the differences of the sexes and how women are raised versus men. There is also attention put to the very idea of the term "Feminist" and what it means, what people think it means and what it does not mean.

And I must say I had some ideas about Feminism that made me wonder if I could indeed be a feminist at all..ever. I love how Adichie makes it ALLRIGHT to be who you are, whether you favor serious business suits, bright red lipstick, are married, are single. I felt the message was "you be you" and I never felt talked down to or that to be accepted I'd have to measure up to someone else's idealized version of who I am supposed to be.

Indeed, that is exactly what she argues against. I really liked what she had to say. It is funny how far women have come but in a way, not as far as would have been expected. I was very comfortable reading this and one does not have to be a Feminist themselves to enjoy the observations made in this story. Highly recommended.
阅读更多
9 个人发现此评论有用

T. L. Cooper
5.0 颗星，最多 5 颗星 A Message about Equality for Us All
2019年2月1日 - 已在美国亚马逊上发表
已确认购买
We Should All Be Feminists by Chimamanda Ngozi Adichie is a written version of Adichie's Tedx Talk about how women's equality uplifts and supports whole communities. I enjoyed her talk so much I wanted it in written form, so I could read it, ponder it, and keep it on my shelves to references at my convenience. We Should All Be Feminists drives home the point about how women's rights are as important as men's rights. Adichie explores the myriad variations of inequality and beliefs around feminism.We Should All Be Feminists demystifies the idea of feminism and explains how feminism benefits everyone.
阅读更多
17 个人发现此评论有用