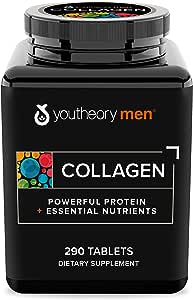 Of you have a medical condition, consult your physician before use.

Of you have a medical condition, consult your physician before use.

Rougue
1.0 颗星，最多 5 颗星 Causes Severe Liver Damage
2019年11月28日 - 已在美国亚马逊上发表
尺寸: 290 Count (Pack of 1)样式: Collagen Advanced已确认购买
DON’T USE THESE! I cannot stress this enough - these pills are DANGEROUS. My husband is currently hospitalized with severe liver damage and the doctors finally narrowed it down to one of the active ingredients in these pills - Fo-Ti. Please do not use these. My husband is only in his 30s, a non-drinker, non-smoker, doesn’t use drugs. He began using these in August - completely healthy, he thought the collagen was beneficial- since he was on the Keto and lost a lot of weight. About 2 weeks ago he suddenly lost his appetite completely, felt generally blah, dropped 10 pounds in under a week, last week his skin and eyes became jaundiced. He went to the doctor a few days late finally who sent him right on to the ER, they couldn’t figure it out, transferred him to a hospital that specializes in liver conditions and finally today a doctor who biopsied his liver and researched these pills said these pills damaged his liver. DON’T USE THEM!! We’re still not sure the damage can be reversed. Since he’s been off the collagen for 3 days now his symptoms are starting to ease up. Please please don’t buy these!! And if you know anyone who does use them please tell them what happened to my husband!
阅读更多
90 个人发现此评论有用

area man
4.0 颗星，最多 5 颗星 Seems to be working
2018年5月4日 - 已在美国亚马逊上发表
尺寸: 290 Count (Pack of 1)样式: Collagen Advanced已确认购买
I've been supplementing with collagen (mainly, Type 2) for severe pain in my knees related to a deficiency in cartilage since January 2018. Until now, I've had next to no success.

I can only say that this seems to be helping based upon a noticeable reduction in pain and increased mobility (and with no other variables added or taken out, my workouts have been at least as intense). I did have my doubts, as this is a product and firm I'm not familiar with.

Bottom line, it works -- and that's good enough for me.

If you're considering taking any collagen supplement, you'll need to supplement with Vitamin C. This supplement includes 100% of the RDA, which would appear to be sufficient. It includes Biotin as well, which benefits skin when used in combination with collagen (although no one from GQ has yet appeared at my door).

I've been trying to steer away from supplements that include preservatives such as this one has, and buy non-GMO (and, if possible, certified organic) supplements. At this stage, I'm just happy to find something that works.

Final word, the supplement's dose is 6 large tablets, which I mention because some people might find it difficult to take them. I prefer capsules generally for that reason, but I've taken to washing these down 3 in the a.m. and 3 in the p.m. with a glass of water.

Julio Romero Martinez
5.0 颗星，最多 5 颗星 I have now 1 year taking it I have a info for new consumer if you want to see like 15 years less..
2018年6月30日 - 已在美国亚马逊上发表
尺寸: 290 Count (Pack of 1)样式: Collagen Advanced已确认购买
First it truly work has describe. Joint and muscle are now feeling great..
I am a 100 % satisfied.
But I found I new ingredient that you can consume with this also ...
Hyluric acid yessss the final ingredient consume no more than 100 mg daily and you will see something amazing will look super Awesome in a week...

Thanks for making good products..

Northridge Mark
5.0 颗星，最多 5 颗星 This actually helps - seems to repair collagen, gives me protein that I lacked
2019年3月3日 - 已在美国亚马逊上发表
尺寸: 290 Count (Pack of 1)样式: Collagen Advanced已确认购买
My 150 year old knees (they aged faster than I did) have developed a bit of arthritis. I found out from an MRI that I've torn tendons in my knee (the doctor didn't think I needed an MRI originally, so the tears that I thought I had weren't diagnosed properly).

My diet didn't have much protein in it, either.

I started taking Men's Collagen Advanced with Biotin at the recommended dose (six large tablets daily), and in just days, some of the issues with both knees seemed to improve. I can walk without (or with much less) pain, my fingernails seem to be growing more quickly than they had for quite a while before I started taking this supplement, and the nails are much stronger.

I had concerns about one of the added ingredients (Fo-Ti) and coumadin, but regular testing didn't show any effect on my clotting.

For now, I'm pretty sure that this helps my joints, that the Biotin is helping my skin, nails, and possibly my hair, and that it's probably supplementing the amino acids that I'm missing from my diet.

Don't bother contacting the manufacturer with questions or comments. As other reviewers have noted, they either don't respond, or do so very slowly (it's been weeks, but I haven't gotten a response).

I've seen complaints about the size of the tablets, and having to take six a day. I've seen some say that they want smaller tablets. I don't think this is possible. Some things can't be compacted further than they already are -- you're getting a lot of collagen in these tablets -- they HAVE TO BE large in order to provide the collagen. This has probably been reduced as small as it can be to provide the benefits. I usually take 4 in the morning (sometimes all six) after a morning meal, and two later in the day.

There've been complaints about an odor. My batch didn't have that problem, but a bottle that I had a few years ago DID. So -- if you're troubled by an odor from these tablets - don't inhale when you take them. The benefits (in my case, at least) far outweigh a bit of odor from the tablets when you swallow them.
阅读更多
10 个人发现此评论有用
加入亚马逊Prime，从此免运费
亚马逊Prime会员可享海外购美/英/日/德跨境免邮，全年无限次！更有免费无限次阅读电子书服务
> 立即加入
了解我们
合作信息
帮助中心和购物指南