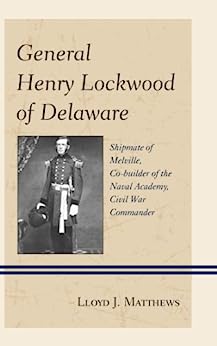 英语版本 Colonel Lloyd J. Matthews (作者) 格式: Kindle电子书
|
分享
分享 <分享样章>
广告
显示所有 格式和版本 隐藏其他格式和版本
General Henry Lockwood of Delaware: Shipmate of Melville, Co-builder of the Naval Academy, Civil War Commander depicts the fascinating and accomplished life of nineteenth-century Delaware son, Brig. Gen. Henry Lockwood. Excerpt for a leave of absence to fight as a Union general during the Civil War, Lockwood was a U.S. Navy professor of mathematics from 1841–1876, serving on the USS United States in the Pacific, at the Asylum Naval School, at the U.S. Naval Academy, and the U.S. Naval Observatory.

Lockwood sailed aboard the U.S. Navy frigate United States, participating in Commodore Thomas Catesby Jones’s seizure of Monterey from Mexico and figuring importantly in shipmate Herman Melville’s novel White-Jacket. Later he was a co-builder of the U.S. Naval Academy at Annapolis. During the Civil War Lockwood pacified the slavery-bound Delmarva peninsula, and commanded a brigade at Gettysburg, the Maryland Heights at Harper’s Ferry, the Middle Department/8th Corps, and a division at Cold Harbor. All these accomplishments occurred in the face of Lockwood’s tendency to stutter which afflicted him throughout his life. This book also takes note of family members such as his son Lieut. James Lockwood, who died of starvation during the Greely polar expedition after having reached the furthest point north of any human; brother Navy Surgeon John Lockwood, whose essays in conjunction with Melville’s White-Jacket were major factors in outlawing punitive flogging in the Navy; and son-in-law Adam Charles Sigsbee, who was in command of the USS Maine when it blew up in Havana Harbor. Several pivotal events in Lockwood’s life have unjustly led to his historical neglect. Here Matthews finally gives Lockwood his due.

Hershel Parker
5.0 颗星，最多 5 颗星 A REVELATION FOR HISTORIANS & A TREAT FOR MELVILLEANS AND OLD MID-ATLANTIC FAMILIES
2014年4月11日 - 已在美国亚马逊上发表
Here is a more extended version of my dust-jacket blurb quoted on Amazon.This book about Henry Lockwood (and his brother John Alexander Lockwood) is a prodigious record of an important clan which will be extraordinarily interesting to military historians and to hundreds of Chesapeake Bay families. Admirers of John A. Munroe's biography of Louis McLane will relish seeing more of the history of great Delaware families, including a McLane daughter. Historians and history-addicts everywhere will read it with astonishment and delight, for Lloyd J. Matthews tells important new stories, some of which I specified in the blurb. Melvilleans will love it, for the book intersects with the life and writings of Herman Melville, who observed Henry Lockwood from his vantage as ordinary seaman in the Pacific and who sought out the older brother John Alexander Lockwood as a boon companion in 1857.

This is a brilliantly researched contribution to the history of the American army and navy. Because the Lockwood brothers were in the right places at the right time and lived so long and because they were remarkable men, this book provides insiders' histories on an astonishing range of American experience such as the early years of West Point, the Florida War (which by coincidence I have just been researching in newspapers, so I know how thorough Matthews is!), the founding of the Naval Academy, the strategic importance of the Pacific, and the history of major Civil War campaigns and battles. This is not an exhaustive list by any means.

GENERAL HENRY LOCKWOOD OF DELAWARE is a long book. That is not a fault. In this book Matthews expatiates at times, but every time the expatiating is justified by his demonstrating how one or another of the brothers' experiences directly or indirectly affected an episode of history. To expatiate as Matthews does is not to digress. He never gives background details without a fresh payout. An impatient reader could object that the book is leisurely. Well, Matthews takes the space he needs, but he is never lax, never self-indulgent. This is a man with a big story to tell, one he has done the research on all by himself most of the time, including sifting through newly-available Lockwood family records and interviewing living Lockwoods. He has not just mastered the standard historical sources and cited them properly. Because he is himself a noted military historian, he regularly supplements those sources with new and highly relevant information. Regularly he enriches what had been accepted as a standard historical account, He never leaves any previously-known episode unimproved and surprisingly often writes what amounts to a whole new episode of history. Superficial reviewers like to say (they think wittily) that long books are "exhaustive and exhausting." Not in this case. This is an exhaustive and steadily enthralling book. Its value lies in its comprehensiveness. No one else could have told this story, and as teller of it Matthews is masterful in deploying its parts. Terms from successful military strategy are called for! Outside Maryland and Delaware this book may not be a runaway bestseller, but it's big, important, masterfully told--a great success.

donna e vassalotti
5.0 颗星，最多 5 颗星 A good read
2021年10月12日 - 已在美国亚马逊上发表
I did the genealogical research for this book. I worked with Lloyd for 8 years and was delighted with the outcome. It was eminently readable and truly fascinating. You don’t have to be a history buff to enjoy this one.
阅读更多