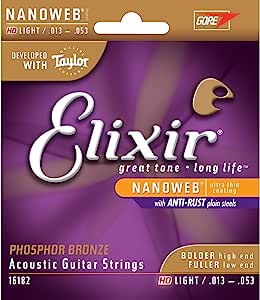 Elixir Acoustic Nanoweb strings don't just sound great; their micro-thin coating keeps them sounding great for a lot longer than average strings. If you want to keep your guitar tone consistently great day in and day out, put on a set of Elixir Acoustic Nanoweb strings. Their coating actually cuts down on unnecessary finger friction. You'll be amazed at how long they last! Less string changes means having to buy strings less often.

Samuel
1.0 颗星，最多 5 颗星 Check strings for Authenticity
2019年10月16日 - 已在美国亚马逊上发表
已确认购买
To make it quick and short, check your strings to make sure you received the real Elixir Nanoweb strings, even if it's sold by Amazon (mine were both shipped AND sold by Amazon).

Interesting observations: Either these aren't official Elixir strings or Elixir is cutting corners on their Nanoweb coating. The glossy and cheap feeling box raised my eyebrow which caused me to conduct these tests.

1. Nanoweb coating should insulate electric current. These strings are clearly conducting and not coated with Nanoweb. I took the old strings currently on my D-35 for comparison, results were clear.

2. There should be obvious signs of Nanoweb coating on the strings starting from the base where the little metal o-ring is. Comparing my current authentic strings to the one I just received, there's a clear distinction on which has the coating. The coating also makes the strings look rose gold.

Quang Le
1.0 颗星，最多 5 颗星 Fake strings/ not genuine.
2018年3月31日 - 已在美国亚马逊上发表
已确认购买
Guys, if you're buying the phosphor bronze nanoweb strings as of March 30, 2018. Please refrain from buying this for a while, you're better off buying just the regular bronze nanoweb strings (NOT PHOSPHOR BRONZE). I just bought them and the phosphor bronze has no coating, doesn't feel sleek like, and sounds very dull. The packaging was unprofessional, it was already opened and looks poorly made.

If you're sketchy that your strings are fake, look closely for a coating. Or feel the strings, if they don't feel smooth or your fingers don't easily slide, it's most likely fake.

Old School
5.0 颗星，最多 5 颗星 Just beware of who you buy these from. Watch out for counterfeits.
2019年12月19日 - 已在美国亚马逊上发表
已确认购买
I was a little apprehensive when ordering Elixir strings on Amazon because of all the reviews by people who received counterfeit Elixirs. I ordered from Shoreline Music. After placing my order, I contacted Shoreline to get assurances that they only sold legitimate Elixir strings. They got right back to me with those assurances and I noticed that they have 100% positive feedback. Even so, after reading of all the counterfeit Elixir strings people have been receiving, I was concerned. But the strings I received are the real thing. I usually use Elixir's on my Guild 12-string and my Eastman E20D six string acoustic guitars but, just for a change, I put on a set of D'Addario EXP strings on my Eastman last week because I had about 7 sets on hand. D'Addario makes good strings and, in fact, that's what came on my Eastman guitar from the factory but my guitars come to life with Elixir PB strings. The difference is profound - at least on my guitars. I took off the D'Addario strings after only a few days and, when I put the Elixir's on, the difference was instantly obvious. Compared to the D'Addario EXPs, the Elixirs gave me smooth, deep, rich bass and beautiful midtones and trebles that don't get lost. I'm not saying that D'Addario EXPs are good strings. They are. But on my guitars, the Elixir's are way better. When I strum a chord, I feel the deep resonance in the guitar body. They're a joy to use and I'm going to give away the 6 sets of D'Addario strings I have. On different guitars, they may sound better than the Elixirs and, of course, it depends on personal preferences.

But the important thing I want to stress is that if you are worried about receiving counterfeit Elixir's (or any top brand of strings that are also counterfeited) I think you're safe buying from Shoreline Music. I know I won't hesitate to buy from them in the future. By the way, there are sites that show examples of how to distinguish real Elixirs from counterfeits. The problem is that there have been packaging changes since the ones I found were put online and the close-up of strings are innacurate in some cases. For example, pictures of what is supposed to be real Elixirnanoweb PB strings show a very thick coating but the nano strings have a very thin coating that wouldn't show up in the pictures. There are other differences to that made those comparisons useless for me.
阅读更多
20 个人发现此评论有用

Beauzeau
5.0 颗星，最多 5 颗星 Been playing elixirs for 10 years, haven't looked back
2019年1月10日 - 已在美国亚马逊上发表
已确认购买
There's no shortage of traditionalists who don't like coated strings for whatever reason. But they're buying strings every month or so if they play regular. A lot of folks say they don't like them because they sound like uncoated strings, and other guitarists say they only play THIS brand or THAT brand because "I can tell the difference. and I don't like it", yada, yada, yada.

Luckily, I was apparently not born with a 'picky ear'. I can't tell the difference between one brand of string and another. They all pretty much sound the same to me. To me, the guitar itself seems to have a much larger influence on the tone than the strings do.

That said, the Elixirs have one thing going for them that uncoated strings don't. THE COATING!!! LOL

I have several guitars. Enough that if I tried to keep new strings on all of them, all the time, I'd be buying strings by the case, on a monthly basis. Sorry, but I'd rather spend that money on MORE GUITARS!

So instead of paying 6 or 7 bucks for uncoated strings (if that's still how much they are, I don't buy them anymore so I don't know), I pay 12 bucks, and instead of having to change them every month, I only have to change them once every couple of years.

The REALLY nice thing about them is, of course, the LACK of rust! I picked up a guitar at a friend's house not long ago and UGH!!! GOD THAT'S GROSS! Nothing worse than rusty guitar strings! It's been REALLY nice not having to deal with that for the last 10 years or so! It's nice to pick up any guitar in the house and it feels like the strings are still brand new.
阅读更多
12 个人发现此评论有用

Sarah & Jung Woo
1.0 颗星，最多 5 颗星 COUNTERFEIT! DO NOT BUY!
2019年9月27日 - 已在美国亚马逊上发表
已确认购买
I've been playing Elixir Strings since 2000. They're the only strings that can withstand my acidic hands. I've tried other brands but always return to Elixir. Since 2007 I've been using Phosphor Bronze Nanoweb exclusively on my acoustics.

I ordered these from Amazon. The packaging was the old art style, which I haven't seen in many years. The string felt rough and uncoated. It was also a different color than the authentic Elixir PBs I got from Musician's Friend. These fakes were a lot more brown looking. I think they are just a plain uncoated string.

STAY AWAY from Amazon.com's Elixirs, they are fake!
阅读更多