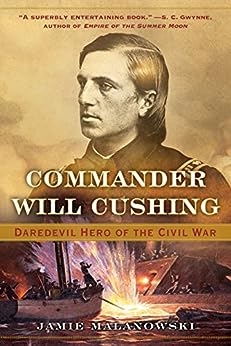 October 1864. The confederate ironclad CSS Albemarle had sunk two federal warships and damaged seven others, taking control of the Roanoke River and threatening the Union blockade. Twenty-one-year-old navy lieutenant William Barker Cushing hatched a daring plan: to attack the fearsome warship with a few dozen men in two small wooden boats. What followed, the close-range torpedoing of the Albemarle and Cushing’s harrowing two-day escape downriver from vengeful Rebel posses, is one of the most dramatic individual exploits in American military history.

Theodore Roosevelt said that Cushing “comes next to Farragut on the hero roll of American naval history,” but most have never heard of him today. Tossed out of the Naval Academy for “buffoonery,” Cushing proved himself a prodigy in behind-the-lines warfare. Given command of a small union ship, he performed daring, near-suicidal raids, “cutting out” confederate ships and thwarting blockade runners. With higher commands and larger ships, Cushing’s exploits grow bolder, culminating in the sinking of the Albemarle.

A thrilling narrative biography, steeped in the tactics, weaponry, and battle techniques of the Union Navy, Commander Will Cushing brings to life a compelling yet flawed figure. Along with his three brothers, including one who fell at Gettysburg, Cushing served with bravery and heroism. But he was irascible and complicated—a loveable rogue, prideful and impulsive, who nonetheless possessed a genius for combat.

In telling Cushing’s story, Malanowski paints a vivid, memorable portrait of the army officials, engineers, and politicians scrambling to win the war. But he also goes deeper into the psychology of the daredevil soldier—and what this heroic and tragic figure, who died before his time, can tell us about the ways we remember the glories of war.

Bill Cushing
4.0 颗星，最多 5 颗星 Complete and unvarnished look at another heroic Cushing
2017年1月21日 - 已在美国亚马逊上发表
已确认购买
Full disclosure: I was actually named after Cmdr. Cushing as part of a traditional Naval family and grew up hearing stories about him. Therefore, I am related (tangentially) to the Cushing brothers, which included recent Medal of Honor winner Alonzo.
This narrative was well done and completely unvarnished--showing Cushing's warts as well as everything else we know about him.
There are many details here, and the narrative follows him beyond the Albermarle "legend" up to (and beyond) his death due to unknown causes. There are also some interesting points of conjecture as Malanowski closes this out.
And I loved one of the closing sentences in the last paragraph: "Cushing was one of those rare men who met his moment, and the result was sublime."

BobR
2.0 颗星，最多 5 颗星 A very average biography
2018年10月9日 - 已在美国亚马逊上发表
已确认购买
One hundred percent of what I know about Will Cushing comes from this clunky telling, so there is a debt of gratitude. But I can’t help feeling it must have failed to add much new to what is understood about the man from the previous biographies written about him.
And the giant stretch of the epilogue - to suddenly, after 300 pages, spend just 3 or 4 trying to “type”his personality - struck me as a shallow injustice to Cushing as well as to 150 years worth of psychological scholarship.
阅读更多
1 个人发现此评论有用

Kindle Customer
5.0 颗星，最多 5 颗星 Worth a read
2022年8月22日 - 已在美国亚马逊上发表
已确认购买
This book will likely appeal mainly to those interested in naval history or the civil war. As a historical biography, it's well worth a read.
阅读更多

Ned Leonard
5.0 颗星，最多 5 颗星 Arguably, perhaps, the original SEAL.
2019年5月10日 - 已在美国亚马逊上发表
已确认购买
Great story of the life of a man, who during the Civil War, became the original SEAL. His brother Alonzo has received greater attention as the artillery commander at the site of the High Tide of the Confederacy during Pickett’s Charge at the Battle of Gettysburg. He was the good brother and Will the rambunctious one. Both are heroes.
阅读更多

George P. Dreckmann
4.0 颗星，最多 5 颗星 An interesting story
2018年2月18日 - 已在美国亚马逊上发表
已确认购买
This book tells an interesting story of a true hero o f the Civil War. The navel war does not get much attention but Will Cushing`s story is exciting, and like his better known brother Alonzo who died a hero at Gettysburg, Will fought violently on the waters. This is an easy book to read and should be enjoyed by fans of US history
阅读更多