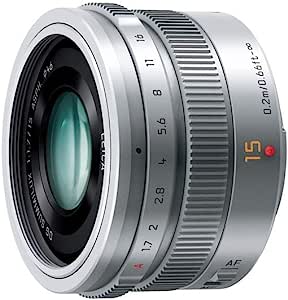 Ivan S
5.0 颗星，最多 5 颗星 I nice little jewel that isn't too big
2015年8月21日 - 已在美国亚马逊上发表
颜色: 银色款式: レンズ単体已确认购买
I purchased this lens, as opposed to the same lens in black mostly because I was in a hurry as I was leaving for a trip where I could really use it. The lens is/was for a Panasonic GX1, so the review is based on the operational combination of the two.

I also own the Panasonic 20mm/1.7 and 25mm/1.4. Compared to the 20mm, the autofocus is much, much faster with seemingly less mechanical noise to it. At 1.7, they do seem to have similar ability with light. This is totally different than the 25mm which is much brighter, of course at F1.4, but the autofocus is similarly speedy. I found that the 20mm was really not quite in my sweet spot in terms of field of view -- it was usually not close enough or not far enough, whereas the 15mm and 25mm combined seem to fit the spread a little better. The 15mm is larger than the 20mm, but smaller than the 25mm, so it's a good in-betweener in so far as barrel length goes.

The photographic results are a tad better than what I've seen on the 20mm, but the real kicker for me was to have something that was a little wider than the 20mm, so I was happy that the image results are at least on-par, if not better. The "metallic" body is nice. I wanted the "black" version, but it was not in stock when I wanted to order it. I've since grown to like the contrast in color between the lens and camera.

The aperture control is physically on the barrel if you want manual control, but the aperture can be also controlled in menu as other lenses. I find that the manual control is a very nice touch. It rotates easily and is "notched" internally to represent those sizes not displayed on the barrel (from 1.7, 1.8, 2, 2.2, etc...). You can "feel" when the aperture ring hits another setting. There is also a switch on the barrel to go between auto focus and manual, which is a nice touch -- but a little small and not quite as easy to operate as I would have hoped. It sticks a little bit.

Overall, I think this lens was worth the price I paid. It was a prime purchase at the time so I was able to get speedy delivery. It was far less expensive here than pretty much everywhere else I looked as well -- which helps immensely as I don't think I could quite recommend this lens if it were in the 500 - > 600 dollar range. For that, I give it 5 stars. If it were that expensive, I would give it 4 stars and say that the 25mm would be a better purchase for that price.

Alan
5.0 颗星，最多 5 颗星 Great Lens For People On The Go
2016年1月2日 - 已在美国亚马逊上发表
颜色: 银色款式: レンズ単体已确认购买
I'm not a pro-tog. I just travel a lot (different country each month) for work and fun. My use-case is mainly to Instagram and make cool short videos for social sharing with friends. I go out a lot at night, so I also need a good low light lens since I prefer not to use flash.

I've included some shots with the lens on an Olympus OMD-EM10 set on iAuto (usually iso200, f1.7) so you can tell what image quality looks like in the hands of an amateur doing normal people things. Evening shots. A food shot. Travel shots with a person far away, medium distance and close up. The most fixing would be me hitting the 'enhance' wand button that standard with Apple OSX or iOS Photos app (too lazy to load up Photoshop nowadays).

I also have the Panasonic Leica 25mm/F1.4 lens as well. I absolutely love that lens as well. The 25mm will shoot better portraits and definitely can tell the difference shooting at night with no flash. The 15mm is a bit easier to shoot with traveling around outside, as you don't need to stand as far away at times. It is also a bit smaller and lighter. And the included hood and rubber lens cover really makes taking out and putting away the camera much quicker and convenient (I'm not a very careful person with things). I highly recommend both lens, and it's different enough to warrant getting both (I held off for awhile). But if you had to choose one; then again consider your use case.

For non-pros who are use to zooming. This isn't for shooting like that. Trust me, having a fixed prime lens will make you start shooting better and you won't miss the zoom as you have your feet.

I will say the quality of build is at least or better than what I expected at that price. It looks and feels nice. Huge difference over the kit lens.
阅读更多

Daniel
5.0 颗星，最多 5 颗星 Seller shipped expedited at no charge! Great lens, no stress about Warranty. Em5 mk2
2019年1月28日 - 已在美国亚马逊上发表
颜色: 银色款式: レンズ単体已确认购买
I decided to "cheap out" and buy this international version, which doesn't have the Warranty and then, of course, shortly after receiving it, I let the lens roll off the bed and smack into my bed frame and dented the lens hood...

Thankfully though, Panasonic makes a tough lens and the functionality and sharpness of the lens were unaffected. I've lugged this thing all over the country, took it onto planes, and let it bounce around in my bag while hiking. It can handle all of that and takes great wide-angle images!

Anthony M.
5.0 颗星，最多 5 颗星 I should buy a second.......
2016年6月2日 - 已在美国亚马逊上发表
颜色: 银色款式: レンズ単体已确认购买
This lens is permanently attached to my GX8. I have no complaint about this whatsoever. It took me 3 years of shooting to find out why anyone could want something wider than 50mm field of view (I mostly do portrait photography), but this lens has changed the way I shoot. It lives with me in day to day life... And using it for my daughter's ninth birthday last week, its the perfect event lens.
阅读更多
2 个人发现此评论有用

Sai Chan
5.0 颗星，最多 5 颗星 A very good lens
2016年3月26日 - 已在美国亚马逊上发表
颜色: 银色款式: レンズ単体已确认购买
Ordered both black and silver versions for my GX8 and GX7 and they work flawlessly. They give very good sharpness, contrast and clarity overall and have better build quality then my Leica 25 & 45. The only downside I have seen so far is a bit high in CA when shooting in the sun! Highly recommended for micro 4/3 users!!
阅读更多
2 个人发现此评论有用
加入亚马逊Prime，从此免运费
亚马逊Prime会员可享海外购美/英/日/德跨境免邮，全年无限次！更有免费无限次阅读电子书服务
> 立即加入
了解我们
合作信息
帮助中心和购物指南