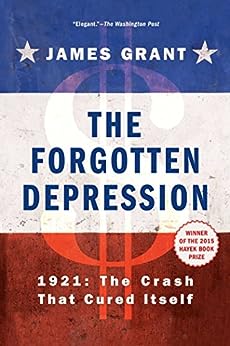 The Forgotten Depression: 1921: The Crash That Cured Itself (English Edition) Kindle电子书

In 1920-1921, Woodrow Wilson and Warren G. Harding met a deep economic slump by seeming to ignore it, implementing policies that most twenty-first century economists would call backward. Confronted with plunging prices, wages, and employment, the government balanced the budget and, through the Federal Reserve, raised interest rates. No “stimulus” was administered, and a powerful, job-filled recovery was under way by late 1921. Yet by 1929, the economy spiraled downward as the Hoover administration adopted the policies that Wilson and Harding had declined to put in place.

In The Forgotten Depression, James Grant “makes a strong case against federal intervention during economic downturns” (Pittsburgh Tribune Review), arguing that the well-intended White House-led campaign to prop up industrial wages helped turn a bad recession into America’s worst depression. He offers examples like this, and many others, as important strategies we can learn from the earlier depression and apply today and to the future. This is a powerful response to the prevailing notion of how to fight recession, and “Mr. Grant’s history lesson is one that all lawmakers could take to heart” (Washington Times).
阅读更多
›  查看更多商品促销信息

Handymancan
5.0 颗星，最多 5 颗星 Less government, more prosperity
2019年3月12日 - 已在美国亚马逊上发表
已确认购买
Facing a 50%+ drop in the stock market, massive post war inflation of both prices & wages, & unemployment of 20%+- the federal government cut taxes, balanced the budget, & stayed out. Within 1 year of the 1921 lows the economy was recovering, on it's own. This predicament slaps Keynesian economics in the face. A total rebuke to the modern notions of ''too big to fail'' & "quantitative easing". Book is very easy to read & split into rather short chapters. Highly recommended for those not familiar with the 1921 depression.
阅读更多
11 个人发现此评论有用

Meatloaf
5.0 颗星，最多 5 颗星 Government has limits
2021年5月23日 - 已在美国亚马逊上发表
已确认购买
In this book James Grant explains why the American economy was able to recover in 18 months or so, from what was called a Depression in 1920, yet it took much longer in the 1930s. What he explains is that in times of a depression or recession, prices have to drop. People are not buying as much as they used to, so businesses have to reduce their prices to sell.

One thing to consider is exports. Lower prices and wages means your exports are more competitive. James Grant towards the end of the book has explained that when their was a recovery, exports were bigger than imports by a country mile and the United States accumulated gold to pay for those exports was much bigger than expected.

The author explains that, however in the 1930s, prices declined, but they didn't cut wages, at least not enough to make business profitable again, which is why in the 1930s the depression went on for a very long time.

TheProgressiveRedneck
5.0 颗星，最多 5 颗星 America's first modern era depression very well described
2019年8月26日 - 已在美国亚马逊上发表
已确认购买
I am a big fan of Jim Grant's work and his book is definitely a worthwhile read on how the 1920's capitalists and cooperative government managed through their very first modern economic depression and how it essentially cured itself.
Every aspiring economist should have this on his/her bookshelf.
阅读更多
3 个人发现此评论有用

Amazon Customer
5.0 颗星，最多 5 颗星 Great Read
2018年1月4日 - 已在美国亚马逊上发表
已确认购买
In the U.S. we tried to soften the depression of the 30s, instead prolonged it. We pompously advised the Japanese in the 80s and did the same. We have pulled the stops out in the early 21st century. None of it has worked all that well. The common problem seems to be our efforts to keep prices from falling. Grant reminds us that falling prices aren't always bad and are often necessary to rebalance economic efforts. Along the way, we see the diversity, complexity, and energy of 1920s America. The research is thorough, and the writing is elegant.
阅读更多
7 个人发现此评论有用

Newt Gingrich
5.0 颗星，最多 5 颗星 Vital reading for the current crisis
2020年4月2日 - 已在美国亚马逊上发表
已确认购买
Grant’s description of a V shaped
Depression that cured itself so fast that it never imprinted on the popular culture is must reading for the mess we are now in. We can recover quickly through free enterprize or we can get bogged
Down in government subsidized and controlled misery. Grant offers hope for fast recovery.
阅读更多