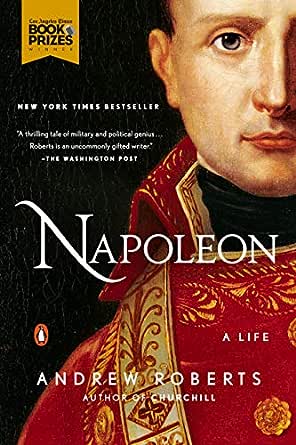 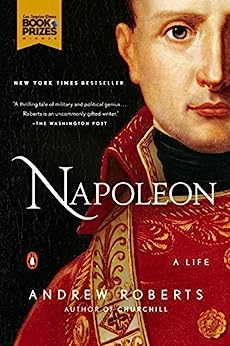 Vincent Poirier
5.0 颗星，最多 5 颗星 Napoleon: what a life!
2015年10月11日 - 已在美国亚马逊上发表
已确认购买
Andrew Roberts's biography is titled Napoleon the Great in the UK, so one would expect nothing but uncritical praise. On the other hand Roberts is British and one would expect the scorn reserved for tyrants and demagogues.

What we get in fact is a deep analysis of the man, of his times, of his accomplishments, and of his failures and while there is praise aplenty, there is no shortage of criticism and myth busting.

The first hint that this will not be a hatchet job comes from Roberts's life itself: an ardent Thatcherite, Roberts supports meritocracy; the now obvious idea that someone should be appointed to a position if he has proven he can discharge the duties that come with it rather than because he was born to it. And Napoleon promoted soldiers to general if they won battles, he appointed civil servants that could deliver results. He made dukes of haberdashers and grocers that could dress and feed his Grande Armée.

He destroys the British myth that Napoleon was some sort of ogre. His portrait shows readers a charming man who instantly commanded the love of the crowds he addressed and who encouraged frank and forthright speech. An ogre would have executed an innkeeper who overcharged him for breakfast, but Napoleon laughed at the innkeeper's quip on why he overcharged him.

Another myth to go is that of the great love affair between Napoleon and Josephine. Roberts replaces that romance with a more realistic assessment. Napoleon held a deep affection for Josephine and he came to realize she had been his good luck charm. And perhaps she was first amongst all his loves. But for Napoleon, destiny and legacy came first.

And Napoleon's legacy did not emerge from Austerlitz or Rivoli or from any of his battles. Roberts makes a perfect case that his greatest achievement was without a doubt his Civil Code. He did not actually write the code, that was the work of one of the many men he appointed because of their abilities, but only Napoleon could have pushed it through a throng of competing interests. With it, he standardized all the different legal customs in force in different regions of France. He forced his Code upon Germany, Spain, Italy and interestingly no one got rid of it after Napoleon was overthrown. Oh, and Napoleon also standardized weights and measures. Would we use the metric system today without him?

But Roberts is not all praise. He faults Napoleon when he needs to and Napoleon did make mistakes. Those he made at Waterloo cost him his throne for good. That loss was his own fault, brought about through series of mistakes and bad judgement that cannot be blamed on weather conditions or his own health on that fateful day.

Napoleon bashers are quick to point out the lavish sums and titles Napoleon bestowed on members of his family, and in one of this book's few shortcomings, Roberts shies away from the obvious explanation, or at least doesn't emphasize it enough: Napoleon was Corsican and Corsicans, like Sicilians and Sardinians, find it difficult to trust those outside the family. Given that background, one ought to be astonished at how many appointments were made outside Napoleon's relatives and Corsican friends.

During his exile on St Helena, Napoleon recounted his glory days for the benefit of his biographer. Looking back on all he had experience, he supposedly said "Quel roman que ma vie!" ("What a story has my life been!")

Indeed it was, and Andrew Roberts recounts it in an excellent biography. Critical but fair and sympathetic.

Brownie
3.0 颗星，最多 5 颗星 comprehensive, but wordy
2018年12月15日 - 已在美国亚马逊上发表
已确认购买
Roberts writes well, but there's really nothing new in this massive history. It's full of minutia, the names of hundreds of Napoleon's subordinates whom you will quickly forget. One battle scene seems to suffice for dozens of others are they are so repetitive in nature--so and so on the right side, so and so on the left side, and Napoleon directing it all from the center. And, as noted above, each battle notated with the names of dozens of generals. And he really goes out of his way to excuse some of the barbarous conduct of Napoleon, those things that earned the nickname of the "scourge of civilization." Nevertheless, lots of good parts, primarily about Josephine, and lots of excerpts from Napoleon's letters. I'm leaving Napoleon on the island of Elba, just have had enough. Need to read some Horatio Hornblower stories!
阅读更多
9 个人发现此评论有用
加入亚马逊Prime，从此免运费
亚马逊Prime会员可享海外购美/英/日/德跨境免邮，全年无限次！更有免费无限次阅读电子书服务
> 立即加入
了解我们
合作信息
帮助中心和购物指南