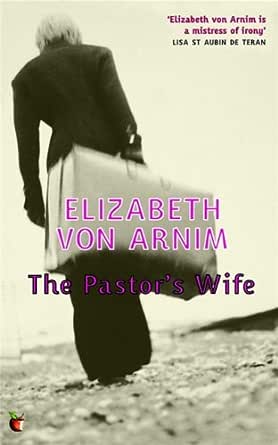 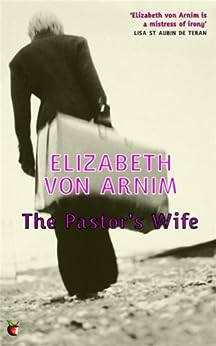 Elizabeth von Arnim is a mistress of irony Lisa St Aubin de Teran [von Arnim] was keenly aware of the powerlessness of an intelligent woman in a male-dominated world Kate Saunders A particular kind of witty and well constructed fiction, a sort of sparkling Euclid, which nobody else can touch Rebecca West Worldly, sharp, witty ... Try to write like that, and her gift will seem very enviable and elusive Terence de Vere White --此文字指其他 kindle_edition 版本。

Cristina S Gheorghe
4.0 颗星，最多 5 颗星 The Pastor's Wife
2012年11月21日 - 已在美国亚马逊上发表
已确认购买
Elizabeth von Arnim , known to readers for her Enchanted April which was turned into a delightful movie a few years ago, succeeds in writing a feminist take on a typical Jane Austen situation, dealing with the quintessential career of young women at the end of the 19th century: marriage. In this entertaining novel, the sheltered young daughter of an English country pastor is wooed with extreme speed by a decisive German pastor, gets married against her family's wishes and expectations ( and maybe even her own...), and shortly after her wedding meets a famous and self-centered artist who decides, again without consulting her, to make her his muse and lover. All the men portrayed in Arnim's novel with a subtle and witty brush are revealed to be monuments of selfishness; their lack of attention to their spouses, daughters or lovers reaches absurdity! The young woman's growth into a sharper awareness of her submissive position and her subsequent shaking free of the patriarchal shackles is followed by the readers with satisfaction and approval.

This book is an extremely pleasant read.

Amazon customer
5.0 颗星，最多 5 颗星 Slow at times. Don't give up.
2010年5月26日 - 已在美国亚马逊上发表
已确认购买
The main character here, a young woman named Ingeborg, was the daughter of a strict and domineering father, a Bishop. She was raised to always follow the proper etiquette of Christian behavior and proper society. She did as she was told and never questioned or disobeyed her father. But sometimes she wanted to be free - at least for a short while - of her father's control and the confinement of her household. So, when it became necessary for her to travel to London for a week to have some dental work done, she was full of anticipation. And when she saw a poster in a shop window advertising a tour leaving for Lucerne for seven days, she impulsively joined it. It changed her life forever.

At times, I found the writing here a bit repetitive - a bit drawn out. Halfway through, I almost put it down. But I read elsewhere that I must not miss the last part of the book. They were right. Make sure you finish this book. What begins as just another good book by Von Arnim becomes a brilliant book by it's ending. And do read the introduction (although I prefer to read it after I have read the book). You learn that much of this story mirrors the Author's own life. I couldn't get this story out of my head for days.

00Dallas00
5.0 颗星，最多 5 颗星 Excellent Read
2014年4月14日 - 已在美国亚马逊上发表
已确认购买
What a pleasure this book was. Deftly written humor in many places. Intricate descriptions of quite varied characters that really pull the reader into the story. Many twists and turns throughout, with a surprising finish. That it was first published one hundred years ago and still holds impact in 2014 is notable. In 1914, Elizabeth von Arnim could not in her wildest imagination have fathomed her immortality through a digital Amazon e-read! The availability of this kind of literature, for free, for the Kindle, is a redeeming quality for Amazon.com -- they are providing a valued service, which feels to me like a kind of thank-you gift, to the customers they've got (in return for all the hundreds and hundreds --and hundreds more-- of dollars we have spent for myriad stuff on their website).
阅读更多
3 个人发现此评论有用

LIMPET
1.0 颗星，最多 5 颗星 This was published like a workbook
2018年3月19日 - 已在美国亚马逊上发表
已确认购买
it arrived on time. But the edition was unreadable! The pages were approximately 13X11" and the type was about 6 picas! This was published like a workbook, not a novel and the dimensions were not detailed in the product description. I know this is a great book, because I've read it before, but I'm never ordering another book from this publisher.
阅读更多
1 个人发现此评论有用

BH
5.0 颗星，最多 5 颗星 Elizabeth in Fine Form
2015年8月17日 - 已在美国亚马逊上发表
已确认购买
Elizabeth von Arnim is one of my favorite authors, for her wit and shrewd character analysis. This is one of her longer works and takes rather too long to get to the gripping part of her narrative. However, once the oncoming shoals are clearly visible to the reader, it is absorbing, trenchant and truly impressive.–This novel reveals one of her finest character portrayals, with her usual superb literary style and sharp wit, so in tune with our own times, rather than hers.
阅读更多
2 个人发现此评论有用
加入亚马逊Prime，从此免运费
亚马逊Prime会员可享海外购美/英/日/德跨境免邮，全年无限次！更有免费无限次阅读电子书服务
> 立即加入
了解我们
合作信息
帮助中心和购物指南