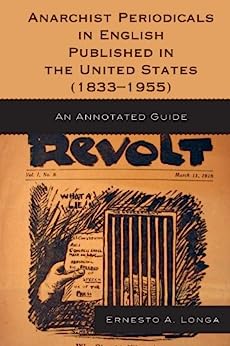 英语版本 Ernesto A. Longa (作者) 格式: Kindle电子书
|
分享
分享 <分享样章>
广告
显示所有 格式和版本 隐藏其他格式和版本
In the 19th and 20th centuries, dozens of anarchist publications appeared throughout the United States despite limited financial resources, a pestering and censorial postal department, and persistent harassment, arrest, and imprisonment by the State. Such works energetically advocated a stateless society built upon individual liberty and voluntary cooperation. In Anarchist Periodicals in English Published in the United States (1833-1955): An Annotated Guide, Ernesto A. Longa provides a glimpse into the doctrines of these publications.

This volume highlights the articles, reports, manifestos, and creative works of anarchists and left libertarians who were dedicated to propagandizing against authoritarianism, sham democracy, wage and sex slavery, and race prejudice. In the survey are nearly 100 newspapers produced throughout North America. For each entry, the following information is provided: title, issues examined, subtitle, editor, publication information, including location and frequency of publication, contributors, features and subjects, preceding and succeeding titles and an OCLC number to facilitate the identification of owning libraries via a WorldCat search. Excerpts from a selection of articles are provided to convey both the ideological orientation and rhetorical style of each paper's editors and contributors. Finally, special attention is given to highlighting the scope of anarchist involvement in combating obscenity and labor laws that abridged the right to freely circulate reform papers through the mails, speak on street corners, and assemble in union halls.
阅读更多
›  查看更多商品促销信息