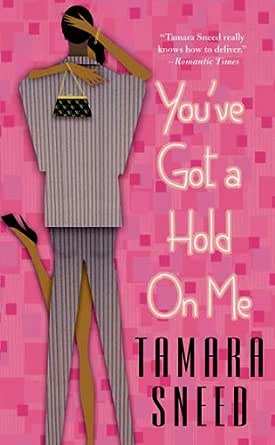 You've Got a Hold On Me (English Edition) Kindle电子书

C. Ballard
5.0 颗星，最多 5 颗星 Fantastic
2007年2月1日 - 已在美国亚马逊上发表
已确认购买
Okay so...I have no doubt in my mind that you will enjoy this book. It has it all; suspense, mystery, drama...the whole nine. I love the character Amelia Farrow, a beautiful, sucessful lawyer, who falls in love with her complete opposite. They might have challenges but this is a steaming love story and great mystery...I give it five stars. Tamara Sneed has done it again. Brillant!
阅读更多

The RAWSISTAZ Reviewers
4.0 颗星，最多 5 颗星 All Is Fair In Love and War
2004年7月3日 - 已在美国亚马逊上发表
Adversarial rivals in the courtroom, they represent opposite ends of the legal spectrum - one is a defense attorney and the other is a prosecuting attorney. Each has a zest for fighting the good fight. Cunning and clever, they are well-respected in their profession. In anyone's book, one is well-to-do having grown up on the right side of the tracks, while the other was educated in the school of hard knocks as a child.
Despite their differences, attorneys Amelia Farrow and George Gibson find more commonalties as they set forth on the daunting task of discovering the truth of a conspiracy that threatens to shake the LA Courthouse to its very bedrock. As they further become embroiled in the scandalous course of events, George and Amelia are thrown together - instead of bitter adversaries, they have to join forces to overcome the dangers that loom over them. Will they be able to successfully unite to resolve the mystery at hand that threatens their very lives or will they be torn apart by the differences of days gone by? As the mystery unfolds, George and Amelia face tumultuous emotions and the perils of their investigation teeter on the very brink of life and death.
Ms. Sneed is to be commended on her efforts. The character development and the unraveling of the story left me wondering "what's next?" To me, this was a mystery story coupled with a romance rather than the other way around. I very much enjoyed reading YOU'VE GOT A HOLD ON ME and was surprised by the climatic ending.
Reviewed by Nedine
of The RAWSISTAZ Reviewers

Amazon Customer
2.0 颗星，最多 5 颗星 too slow to be a mystery...
2004年4月11日 - 已在美国亚马逊上发表
This novel starts off very slowly. For me a mystery novel needs to hook you within the first ten pages. "YGHOM" is too slow to be a mystery and does not have enough of that "UMPH" to make it a good love story. I received an email about the release of this novel and went right out to purchase it....I could have had a V8 or a Mochachino and been more fufilled.
I read the first fifty pages the day I got the book, and I was thinking OK, "when is it going to get good?"
The novel just moved too slowly for me to enjoy. Amelia and George work on opposite sides of the legal justice system yet find themselves trying to solve a crime while fighting the attraction they have for each other...typical LMN(Lifetime Movie Network) fare, but less entertaining!
Valerie Wilson-Wesley, Terris Grimes, or Barbara Neely, please send Ms. Sneed your old creative writing notes.
阅读更多
5 个人发现此评论有用

LaSonya Woodom
3.0 颗星，最多 5 颗星 Basically satisfying Read
2004年2月5日 - 已在美国亚马逊上发表
I feel that this is basically a good read. However, it seems to me that it places more emphasis on the mystery side than the romance side. I feel that the author could have focused more on the budding romance between Amelia & George.
The mystery plot writing in itself is very exhilerating as well as suspenseful. This is a great whodunit for a cold rainy day. I feel that the author uses clear, vivid description and detail in this book. I felt as if I was breaking and entering right along with them in the courthouse. (talk about really getting into a book). This is though, in my opinion, more in the mystery genre than than of romance. Congrats Tamara, on a work well done. Keep on writing and I'll keep on reading!!!
阅读更多
3 个人发现此评论有用
加入亚马逊Prime，从此免运费
亚马逊Prime会员可享海外购美/英/日/德跨境免邮，全年无限次！更有免费无限次阅读电子书服务
> 立即加入
了解我们
合作信息
帮助中心和购物指南