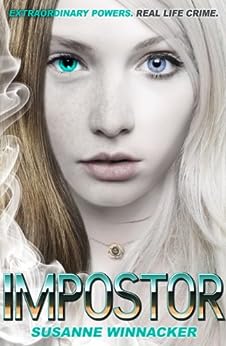 Tessa is a Variant, able to absorb the DNA of anyone she touches and mimic their appearance. Shunned by her family, she's spent the last two years with the Forces with Extraordinary Abilities, a secret branch of the FBI. There she trains with other Variants, such as long-term crush Alec, who each have their own extraordinary ability.
When a serial killer rocks a small town in Oregon, Tessa is given a mission: she must impersonate Madison, a local teen, to find the killer before he strikes again. Tessa hates everything about being an impostor - the stress, the danger, the deceit - but loves playing the role of a normal girl. As Madison, she finds friends, romance, and the kind of loving family she'd do anything to keep.
Amid action, suspense, and a ticking clock, this super-human comes to a very human conclusion: even a girl who can look like anyone struggles the most with being herself.

'An unpredictable page-turner ... reminiscent of a Stephen King novel.' VOYA

'... manages to walk the tricky line between fun and suspenseful. I was quickly lured into the covert world of Variants and the hunt for a brutal serial killer, but it was Tessa herself who ultimately won my heart. No matter what face she's wearing, Tessa is an endearing hero whose yearning for love and acceptance is one we can all relate to.' (Marissa Meyer, New York Times bestselling author of Cinder)

'A thrilling whodunit that kept me guessing until the very last pages.' (
Amy Plum, author of the DIE FOR ME trilogy)

'With its compelling mystery and intriguing characters, Susanne Winnacker's Impostor kept me reading late into the night. I really enjoyed it!' (Jodi Meadows, author of INCARNATE)

Susanne studied law and is now a full time writer. She lives in Germany with her husband, a dog that looks like a sheep and three bunnies that have destroyed every piece of furniture she's ever owned. She blogs for The League of Extraordinary Writers. --此文字指其他 kindle_edition 版本。

T. Banghart
5.0 颗星，最多 5 颗星 Fast-paced and intense!
2013年6月13日 - 已在美国亚马逊上发表
已确认购买
First of all, I LOVE the concept of this book. How ridiculous would it be to pose as someone who is already dead? The implications of that...lying to the person's family, pretending to be friends with her friends....honestly it's an incredibly heart-wrenching situation to imagine. And Susanne doesn't flinch away from the complications and consequences of her main character's mission. IMPOSTOR is a murder mystery and a "superhero" book, but it also has a dark, emotional heart to it that's incredibly compelling.

Tessa is a great character: vulnerable and wounded, but also capable of this extraordinary power. Like most superheroes her unique skills come with a price. I was rooting for her from the first page, and am already looking forward to watching how she continues to grow in book 2.

That's another thing I loved about this book. It's got a great climax, a great ending. There are some tantalizing questions left unanswered, setting up a sequel, but in a way that's fully satisfying. No cliffhangers here! Just the desire to keep reading about Tessa and spending time in her world.

Yes, there's a love triangle, but interestingly Tessa is NOT at the center of it! Rather, she's got her eye on Alec, a fellow Variant...who already has a girlfriend. This twist on the triangle is really interesting and, frankly, very realistic. How many of us can relate to having a crush on someone who's already taken? Watching Tessa muddle through that situation - sometimes doing the right thing, sometimes not - felt really authentic to me. I appreciated how Susanne set up some really interesting, non-typical relationships in this book. It kept me guessing, waiting to see how everything would play out.

Overall, IMPOSTOR is a fast, intense read that will keep you guessing up until the very end. If you enjoy your murder mysteries paired with some fun scifi....or like your romances angsty and complicated...this is definitely the book for you! I really enjoyed it, and hope you will too!
阅读更多
2 个人发现此评论有用

When I was young, teachers told me I could be whoever I wanted to be. I never guessed that it could actually happen. My name is Tessa and I am a Variant. Who ever I touch I can shape shift into. Sounds freaky doesn't it? I've done it so many times through out my life I'm used to it now.

A serial killer has killed three people in Livingston, Oregon. One of the victims is in a coma. While she is in the hospital, I am to impersonate her. After years of training I'm finally ready to go out into the field. I'm a little nervous but I think I'll do ok. All right I am very nervous. I have my doubts. I only hope I will be able to pull this off.
****
The cover was the first thing that attracted my attention. It was the different color eyes. I read this book in one sitting. I hope you enjoy it as much as I did.
阅读更多

DJB
5.0 颗星，最多 5 颗星 awesome
2014年2月21日 - 已在美国亚马逊上发表
已确认购买
I loved it i hated the cliff hanger but its good that there will be another book coming out soon
阅读更多

sammie easley
5.0 颗星，最多 5 颗星 Five Stars
2014年8月19日 - 已在美国亚马逊上发表
已确认购买
such an amazing book, the second one was even amazing too
阅读更多