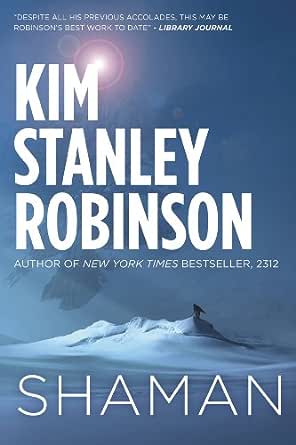 "2312 is a monumental tour-de-force that re-imagines the solar system in ways no one has envisioned before. Whether comparing the compositions of Beethoven to those of skylarks and warblers, or describing a life-threatening sunrise on Mercury, Robinson fills 2312 with joy and exuberance, danger and fear, and the steadily mounting suspense of a mystery that spans the planets. This is the finest novel yet from the author who gave us the Mars Trilogy and GALILEO'S DREAM. An amazing accomplishment."—Robert Crais

"Intellectually engaged and intensely humane in a way SF rarely is, exuberantly speculative in a way only the best SF can be, this is the work of a writer at or approaching the top of his game."—Iain M. Banks on 2312

"Robinson's extraordinary completeness of vision results in a magnificently realized, meticulously detailed future in which social and biological changes keep pace with technological developments."—Publishers Weekly on 2312

" In his vibrant, often moving new novel, "2312," Robinson's extrapolation is hard-wired to a truly affecting personal love story. [...] Perhaps Robinson's finest novel, "2312" is a treasured gift to fans of passionate storytelling; readers will be with Swan and Wahram in the tunnel long after reaching the last page."—LA Times

"Robinson's expert world building and lyrical prose offer Jack London-esque pleasures as they depict the stark beauties of the icy landscape - it's desolation, dangers and the desperate choices it forces people to make when pushed to the edge of existence. Richly detailed."—Kirkus

"This novel bears the markings of Robinson's consummate skill with a sort of anthropological fiction...Spectacular world building."—Booklist

"A seriously composed and compelling novel about prehistoric life...some of the most intelligent entertainment you can find."—NPR Books

"A thrilling journey through an age of ice and stone - one of Kim Stanley Robinson's best!"—Greg Bear

"This book proves once again that Robinson's fascination with the human condition and mankind's journey transcends easy genre labels...Despite all his previous accolades, this may be Robinson's best work to date, focused so sharply as it is on the simplest way of being human."—Library Journal

"The novel is an amazing piece of recreation, vividly evoking the deprivations, animalistic beliefs and day-to-day struggles of a primitive tribe."—Financial Times (UK) --此文字指其他 kindle_edition 版本。

Kim Stanley Robinson has won the Hugo, Nebula and Locus awards. He is the author of over twenty previous books, including the bestselling Mars trilogy and the highly acclaimed science fiction epic 2312, which has been shortlisted for Hugo, Nebula, BSFA and Arthur C. Clarke awards. He lives in Davis, California. --此文字指其他 kindle_edition 版本。
click to open popover

RBH
5.0 颗星，最多 5 颗星 Robinson's best character development
2016年1月11日 - 已在美国亚马逊上发表
已确认购买
Robinson's best novel of those I have read. For those of us not thrilled with long tech-weenie descriptions of how things might work someday, Robinson's descriptions of stone age technology are more interesting than tedious (sometimes) renderings of terra-forming etc. Moreover, his characters in this novel are the most well developed human beings rendered in any of his novels. He manages to avoid a single thoroughly repulsive female character (unlike in his novel 2312)! Even the judgmental, temperamental, and churlish example is replete with redeeming characteristics. I'd enjoy seeing a sequel to this.
阅读更多
9 个人发现此评论有用

this is easily the fastest moving, easiest to read, easiest to understand, book of his. it's also a very spiritual book, which shows us the very likely truth that early men/women had our same questions/awe/poetic explanations about the cosmos and its mysteries.

this story of cavemen creates people who become very real as we read about their daily lives/loves/concerns. although their time is very removed from ours, many of their fears/loves/pains/pleasures are basic to our species. the characters were movingly portrayed.

i was very touched by the scenes written here, showing the love, care, and emotional attachment we all (well, a lot of us) have for family and friends. that has not changed in all the millennia since, and might be our greatest strength as a species.

when i read about the cave paintings, i just got chills.....the words almost seemed to bring me right to those very moments in time, when early painters created their work using rudimentary tools, yet using their artistic/visual skills to replicate what they experienced, as they observed and hunted animals.

there is some beautiful poetry here, and some haunting portrayals. very highly recommended.
阅读更多
12 个人发现此评论有用

Delemont
4.0 颗星，最多 5 颗星 Ice Age Coming-of-Age Tale
2014年8月4日 - 已在美国亚马逊上发表
已确认购买
I enoyed this book set in the last Ice Age in Europe. The people are hunter-gatherers and live in small tribes. The climate is cold with a very short summer, so gathering enough food to get through the long winter and spring is a primary focus, as are relationships among tribe members and with other groups. Loon, the main character, is a reluctant shaman-in-training. The book is his coming-of-age tale. I did not give it 5 stars because the book occasionally uses words and images that are too modern. Did they really have "pails"? One character uses a modern swear word. Couples "got married". Would also have appreciated a glossary of some paleolithic terms used, especially for the animals that don't exist anymore. However, the book was still very interesting and a good read.
阅读更多
7 个人发现此评论有用

barbara woods
5.0 颗星，最多 5 颗星 WOW, AGAIN!!!
2019年3月28日 - 已在美国亚马逊上发表
已确认购买
Another profound story from my favorite author...rivals The Years of Rice and Salt and that is saying volumes. I am so in awe of his sense of observation, perspective and irony, combined with his ability to put his thoughts into such a medium as words. I'm so grateful that I have shared this time on this planet with the likes of Kim Robinson (and a few other geniuses like Hans Zimmer and Itzak Perlman) . Buy this book!! Barb
阅读更多
1 个人发现此评论有用
加入亚马逊Prime，从此免运费
亚马逊Prime会员可享海外购美/英/日/德跨境免邮，全年无限次！更有免费无限次阅读电子书服务
> 立即加入
了解我们
合作信息
帮助中心和购物指南