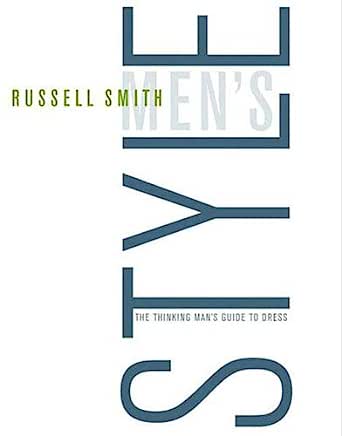 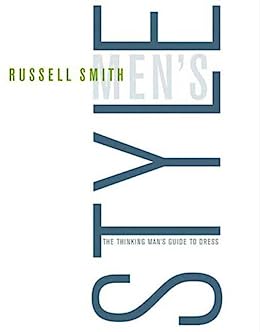 Witty and informed manual of male dress sense...Mr. Smith provides detailed tips, with illustrations, on myriad points of male attire, from tweed selection to shirt-tucking to watches and Y-fronts, along with helpful overviews of big-picture manly clothing dilemmas. (The New York Times)

His restless intellectualism, his muscular prose, and his signature wit make him the auteur de mode for the club crowd and fashion literati alike. Men's Style abounds with captivating and original insights. Both a practical guide for the elegant man and a cultural survey of fashion and trends. It is even more entertaining as a collection of Smith's seductive prose and his often hilarious observations about the urban landscape. (The Globe and Mail)

Russell Smith writes weekly columns on both fashion and the media in Toronto's Globe and Mail. He has written for publications including the New York Review of Books, Details, and Travel and Leisure.

SUITS
All the world is not, of course, a stage, but the crucial ways in which it ­isn’t are not easy to specify.
–ERVING GOFFMAN

You need one. I ­don’t care if you work in your basement. I ­don’t care if you’re an artist. A grown-­up man needs at least one suit for special events. And once you have one, a good one which fits you and ­doesn’t make you feel constricted and displayed like a prize cake, you will wonder why all your clothes ­aren’t suits. You will want to buy three more. The standard men’s uniform of loose but sober jacket and trousers is a remarkable con­fidence-­giving garment: people will treat you differently when you are in a suit; they will look at you differently, they will ask your opinion, they will expect you to take care of trouble.

Women like men in suits. They may tell you other­wise — particularly if they are associated with a university in some way, or artists. Academics and students in, say, English, or philosophy, may squeal with disgust at the idea of a “dressed-­up man”; artists will giggle, as if the idea is just embarrassing. This is because in these circles to admit attraction to a man in a suit is to betray the solidarity of one’s working-­class comrades and to delay the inevitable revolution. “Suit” is synonymous with “fascist baby-­eater,” or at the very least “insensitive boor” or “uptight suburbanite.”

Obviously the honest expression of aesthetic response and/or sexual desire in these circles is not going to be exactly unfettered. In other words, ­don’t believe a word of it.

I have found that there is almost no woman, no matter how many pairs of Birkenstocks she owns, no matter how devoted to her organic garden, who does not react with some slight tremor of the heart, some mild increase in blood pressure and dilation of the pupils, on seeing a man — particularly her own man — emerging from a cocoon of olive cotton and stepping forward in the sober costume of authority, his shoulders squared, his posture righted, with crisp collar and cuffs.

Part of the bad rap of suits, among bohemian men and women alike, is that our ostensible nonconformists never seem to picture good suits. They always imagine bad ones: the ones their dad or their first husband wore to tense family events; they picture green double-­breasted ones, or pale grey pinstripes with a waistcoat and slightly flared trousers, all of them hot and stiff and shiny and looking like faded posters for movies set in Atlantic City in the eighties.

I have often taken men, highly resistant men, shopping for their first grown-­up suit. They have tended to be artistic types, writers usually, who have managed to make it well into their thirties without leaving their teenage uniform of jeans and running shoes, and who on occasion have never even learned to tie a tie. Each required a new suit for a special occasion (a wedding, an interview, a book tour), but I think each had also come to a stage in his career that made the suit symbolic of a decision to embrace a new kind of life, a life of success that would have a public component. In short, adulthood.

The procedure was for them fraught with misgivings both ideological and aesthetic. Several of them had old suits hanging in their closets, suits which they had been forced to buy by parents or bosses in previous lives (double-­breasted and green) and which they felt they had to wear, like a kind of absurd, lit-­up party hat, as one of the penances of certain excruciating obligatory events, such as weddings or graduations or Easter church services. They thought — consciously or not — that suits had to be rather tight and hot and itchy and that they had to be unfashionable and, bafflingly, that they had to be in pale colours. The first-­time suit buyer nervously gravitates for some reason toward dove grey and beige. I suspect that this comes out of a fear of formality. My guys felt, instinctively, that a lighter-­coloured suit was a kind of compromise, and that it was more youthful. Charcoal and navy, they thought, were “bankers’ colours,” colours that a young man ­doesn’t feel he can carry off without being rich and grey-­haired.

They could not have been more wrong, of course. If you are buying only one suit, that suit must be versatile, and a pale suit is only wearable in summer, which is not a long season in most of the G8 nations. You can, on the other hand, buy an extremely lightweight navy suit that is wearable year-­round, and you can haul it out for cocktail parties and funerals alike. My friends tended to think that navy was somehow square — until they saw themselves in navy by Boss or Armani or Paul Smith or John Varvatos or the more forward lines of Canali or Zegna. All that defiant contrariness goes away when they come out of the change ­room wearing both jacket and trousers (this is important — you have to see the whole thing) of a soft, lightweight, dark-­coloured new suit of elegant cut, with proper shoes, a white shirt, and a silver tie. They see this in the mirror and they are amazed. Their first expression is always one of surprise verging on shock; this quickly changes to a wide smile. They realize that a new part of themselves has been discovered. They look manly but not old; confident but not conservative.

If the new suit fits you properly, you will not feel “dressed up.” It will not be constrictive or feel unnatural; it ­shouldn’t make you feel self-­conscious or delicate about how you stand or sit. You ­shouldn’t notice it. And neither should other people: they should notice you, how strong and fit and clever you’re looking.

kthdimension
5.0 颗星，最多 5 颗星 Style and Substance
2010年2月1日 - 已在美国亚马逊上发表
已确认购买
Russell Smith's 200+ page style guide is a must-have for any man aiming to develop a solid sense of style based on timeless principles and the appreciation for a proud and meticulous appearance. If you already fancy yourself a dandy, however, the advice proffered by Smith may be material already familiar to you, although the brief history lessons may still be worthwhile. For those men who have yet to graduate to the fashion advanced class, Smith collates and presents an array of rules dictating tasteful male fashion: "Rules are men's friends; they can substitute for taste" (pp.24). Although this book is relatively compact, Smith discusses all the important fashion elements: shoes, suits, jackets, shirts, ties, hardware (e.g. watches, cuff links), formal wear, casual wear, underwear, outerwear, scent, and hair. As much as this book is a presentation of facts about male clothing and appearance, however, it is also Smith freely interjecting his opinion about what he considers stylish, swanky, and even stupid. No matter your level of sartorial skill, this book is worth having, reading, and referencing if you have questions about shoes, lacing, vests, jackets, slacks, cologne, or the like.
阅读更多
8 个人发现此评论有用

Amazon Customer
5.0 颗星，最多 5 颗星 Style - So much more than a fashion rulebook
2009年12月14日 - 已在美国亚马逊上发表
已确认购买
I just finished reading Russell Smith's STYLE: The Thinking Man's Guide to Dress. I have to say I was duly impressed. I kept waiting for it to slip into the realm of snobbery, and it verged on it, but what started out as snobbery, came out, in the end, as honesty and insight.

I most definitely am not the market for this book. Ostensibly this is a guide to the rules of men's fashion, and it fulfils that role well, in an interesting and witty manner. But the premise is that if you're not wearing a suit, anything goes. I hardly ever wear a suit.

He does offer pointers for 'casual' dress, but feels that this is dangerous territory because most people have no sense of style, which is very true. Just take a look around. I have no real interest in the "rules" of fashion but picked the book up out of curiosity.

The real rewards for me were Mr. Smith's insight into culture, trends, and class, which transcends fashion and finds applications almost everywhere. I've cited this book dozens of times to back social insights that have nothing whatsoever to do with fashion. So my take away was that this is a great read, and maybe more aptly titled, "the thinking man's guide to culture." I found it insightful and extremely readable.

If you're looking for a "guide", but don't want some stuffy dry tome, you can't go wrong here. But even if you couldn't care less about the rules of fashion but enjoy good writing and social insights (in other words, you're like me) this book is still worth a look.

RobT
5.0 颗星，最多 5 颗星 Great Read and Firm Advice
2010年9月11日 - 已在美国亚马逊上发表
已确认购买
I purchased this book after I read Esquires guide. The author has an excellent grasp of mens fashion. He gives good advice, although his distaste for the button down shirt is questionable. He does go into some history of male fashion, which I found interesting. His advice on shirt colors and ties is excellent. He leans toward the more flamboyant side with bright silk pocket squares and bright ties. I agree with him. The dull red tie, white shirt and blue suit, remind me of 1980 IBM technicians. I bought more French Cuff shirts after ready this book on his admiration for the trend. You'll get a good overview of male fashion. I'm glad I bought this as a companion to my Esquire guide. It is always good to read two points of view. I highly recommend this book.
阅读更多
4 个人发现此评论有用

John Lemen
5.0 颗星，最多 5 颗星 Informative and Funny
2018年3月5日 - 已在美国亚马逊上发表
已确认购买
This book provides a good overview of different types of men’s clothing and teaches the reader how to discern quality and style. The author is not shy about giving his opinion, and while I didn’t agree with all of it, I thought his views were well informed and entertaining to read.
阅读更多