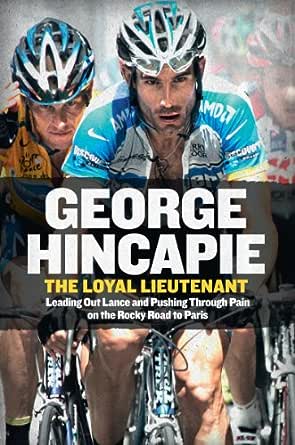 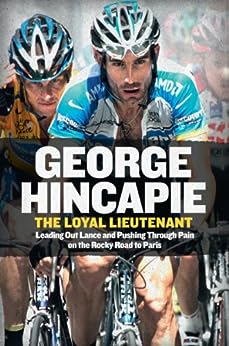 The Loyal Lieutenant: Leading Out Lance and Pushing Through the Pain on the Rocky Road to Paris (English Edition) Kindle电子书

“A well-written book encompassing all the things I like about sports and sports heroes--the trials and tribulations, the drama, and the choices . . . I think this book will make everyone who reads it, if they are honest, ask ‘What would I have done?’” (Ty Murray, "King of the Cowboys," nine-time world champion in rodeo) --此文字指其他 kindle_edition 版本。

George Hincapie is one of the most recognized riders in the world, with numerous world championships, national championships and professional victories to his credit. George is the only team-mate to have played a pivotal role in all seven Lance Armstrong victories. He’s also the only supporting rider to ever be on a Tour winning team nine times. This is his first book.

Craig Hummer was a seven-time U.S. Ocean Ironman Champion and winner of over forty National and International Lifesaving Titles. The Emmy-nominated sports broadcaster has been involved in the ‘alternative’ and ‘action/lifestyle sports’ markets for over twenty years; first as a professional athlete in the sport of ‘Ocean Ironman’ racing, then as a commentator who has now widened his expertise into multiple sports.

John D. Blakey MD
4.0 颗星，最多 5 颗星 What can I say...
2015年9月19日 - 已在美国亚马逊上发表
已确认购买
I was always a fan of big George. It was always evident that he had a big heart literally and figuratively, and I always rooted for him, especially in Paris Roubaix. There are some great parts of this book, but unfortunately it is clear that it is written with an agenda and position in mind. By the end I wanted to say, "You don't have to write this crap George!...we love you anyway". I would have loved to read more about the early, innocent years because I know literally nothing about the world of domestic cycling , particularly in the early years. George was obviously a real phenomenon, and it would be great to read more about that time. Ultimately I think the book is worth a read but with the knowledge that there is a PR rehab agenda behind it that weakens the value and was unnecessary for real fans. I hope George writes a book without lawyers sometime.
阅读更多
5 个人发现此评论有用

John Doll
3.0 颗星，最多 5 颗星 A good book about a GREAT cyclist.
2016年2月1日 - 已在美国亚马逊上发表
已确认购买
George Hincape had an amazing career as a professional cyclist, starting the Tour de France 17 times, and playing a key role in 9 tour victories. He is also a likable individual. His devotion to family and friends, along with his quiet drive and focus make him a truly admirable figure. The Loyal Lieutenant describes George's life from his earliest times on a bike up to his retirement in 2012. It's an impressive story, and while it's a matter of personal preference, I would have liked to see more attention spent on the story of his racing, than on the story of the culture of doping that surrounded the sport at the time.

The writing is solid, though sometimes a bit jumbled because of the many sidebars - statements from friends and teammates. These statements are often interesting and reveal the true respect George earned from a wide range of cycling greats, but they can also disrupt the flow of many sections of the narrative. They seem, more often than not, to get in the way of introspection of the author's part, and they certainly lead to a choppy style.

The first segments of the book dealing with George's professional career, especially those dealing with his time on the US Postal Service / Discovery Channel Team are somewhat vague and wooden. I can't help but feel that either details have been edited out, or it's simply a period he would rather not discuss in detail. The reader does come to understand the pervasiveness of doping in the sport at that time, and the thought process that lead riders to view it as is simply a recovery / training tool. Sadly, there's not a lot more - again, it's a personal preference, but i would have been excited to read more details of the races, the training, or the mindset of George and his teammates during this period. It IS there, just not in a way that's satisfyingly fleshed out.

The book gains momentum as it progresses, however. The descriptions of the Highroad and BMC squads are thoroughly enjoyable. You get a great view of many of the figures around George, as well as the man himself. In addition, the writing becomes infinitely more personal and engaging. From the time of his decision to reduce and eventually end his EPO use and transfusions, Hincapie seems much less restrained in his recollections. His conviction in his decision, his purpose in helping change the culture of the sport, and his pride in his "clean" accomplishments show through very clearly and make for much more engaging and personal reading than the early parts of the book.

In the end, the book is a solid view of the life of one of the greatest US cyclists of all time, and someone who seems a thoroughly likeable guy. Though I wished for more fluid writing, and a higher level of engagement from the early portions of the book, I'm very glad that I read it. I'd recommend it to any cycling fan as long as you don't expect too much.