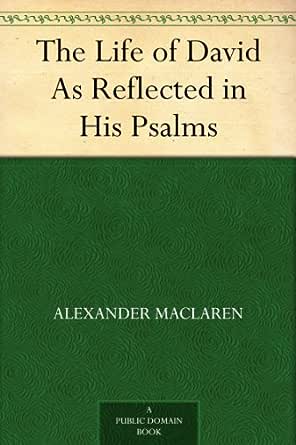 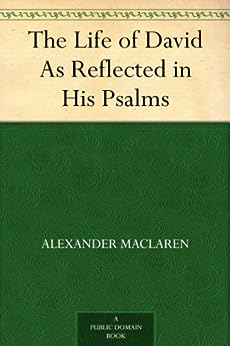 Alexander Maclaren (1826-1910) has been known for gen erations as the prince of preachers. He was born in Scotland and lived much of his life in England. His abilities to dissect a passage and to use analogies from nature and life have long been imitated. His sermons reveal his passion, spiritual insight, and intellectual power. --此文字指其他 kindle_edition 版本。

genev
3.0 颗星，最多 5 颗星 genev
2012年8月6日 - 已在美国亚马逊上发表
已确认购买
Alexander MacLaren does not attempt to provide a biography of David, but as the title infers, limits his discussion to the insights we might receive as David reveals himself in his psalms. I found particularly insightful these comments from the text:

"The psalmist knew that all being and action had their origin in God."

"To love the Lord is the path, and the only path, to hoping in the Lord. So had the psalmist found it for himself. In his changeful, perilous years of exile he had learned that the brightness with which hope glowed on his lonely path depended not on the accident of greater or less external security, but on the energy of the clear flame of love in his heart. Not in vain had his trials been to him, which cast that rich treasure to his feet from their stormy waves. Not in vain will ours be to us, if we learn the lesson which he here would divide with all those `that wait on the Lord.'"

"A parent can have no sharper pang than the sight of his own sins reappearing in his child."

D. Baumgardner
5.0 颗星，最多 5 颗星 Brilliant Exposition of the Psalms
2020年7月11日 - 已在美国亚马逊上发表
已确认购买
What a marvelous work this is. The author takes the Psalms of David and gives us a play by play breakdown of exactly what was happening in David's life as each one was written. The author himself uses such beautiful imagery in his writing, that it compliments David's words, making each Psalm that much more vivid. Outstanding!
阅读更多
1 个人发现此评论有用