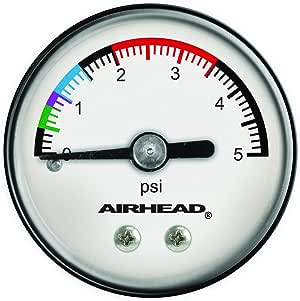 John
4.0 颗星，最多 5 颗星 Good air gauge but needs mods to work on Summit 2 Air Valve
2017年9月8日 - 已在美国亚马逊上发表
已确认购买
I purchased this to use this for checking the air pressure in a pontoon raft that has a limit of 2.5 PSI. Standard auto gauges and bicycle gauges simply don't read pressure accurately enough to use for inflating low pressure equipment. This item appears to work fine (I don't have an another low pressure air gauge to double check the reading. When the air gauge read 1 PSI the air tube felt ready to burst despite the label saying it should be inflated to 2.5 PSI. You have to use some common sense so I didn't go beyond 1 PSI). The reason for four stars is that the advertising photo shows the gauge mounted to a Summit 2 type air valve. Unfortunately the slot opening is too narrow to fit over the the cross bars of the Summit 2 air valve. You can fix this by carefully enlarging the slot to a width of 1/4" with a utility knife...just enough to allow the gauge to slip down over the bars and twist into place. The second problem with this gauge is that it lacks an O ring to seal the air valve once it is seat on the air valve thus allowing air to leak rapidly out of the tube. You can fix this by adding an O ring of 1/8" thickness and an inside diameter of .80 inches (20mm). Go to your local hardware store for the O ring.
阅读更多

WLA127
4.0 颗星，最多 5 颗星 Classic Colorado XT modification
2018年6月30日 - 已在美国亚马逊上发表
已确认购买
I’ve been trying to find an adapter and pressure gauge to fill my Classic Colorado XT and I finally l ordered this setup. Out of the box, it does not work, but with a Dremel tool and some patience, I managed to remove a bit of plastic on the adapter and made it work. 2.5 pounds of air is quite firm, but after the modification, this gauge seems to work great.
阅读更多
6 个人发现此评论有用

James D
5.0 颗星，最多 5 颗星 Handy little gauge, but does not work out of the box with Classic Accessories Pontoon Valves.
2019年7月10日 - 已在美国亚马逊上发表
已确认购买
I bought this gauge to check the pressure on my Classic Accessories pontoon boat. I thought it would work with minor modification to one of the valve adapters (the one with the slotted prongs) but while they are similar, the valve adapter does not seal with the pontoon's valve face even if you modify the slots so that the plug can be inserted fully. This is because the flat o-ring bushings are in different locations.

However, I was able to make it work using the thickest cone valve adapter, removing the metal pin, and using the inflation adapter that came with the boat. Note that sticking the cone adapter into the inflation tool isn't enough; you need a way to depress the valve stem while the adapter is connected in order to pressurize the gauge. So I drilled the small end of the cone adapter for a 1/4" hole and added a piece of 1/4" macroline tubing inserted inside the adapter tube that would push down the valve stem when the inflation adapter was inserted.

The advantage of this is I can leave the inflation adapter plugged in after pumping, insert the gauge, and when it's in far enough, the macroline pushes the button and checks the air pressure. If it's still too low, simply pull out the gauge assembly and reinsert your hose and go back to pumping.

I may 3d print or cannibalize a spare valve plug from the pontoon boat to make a dedicated gauge plug out of that, but this works in the meantime. The gauge has a 1/8 NPT male plug which you screw into the adapters, so the idea would be to get a female 1/8 NPT coupler, screw it into the gauge, then add a male 1/8 NPT hose barb reducer. Drill a hole through the top of the valve plug large enough to insert the hose barb end, determine the stem length needed to depress the valve button, then cut it down and glue everything together with epoxy. If I decide to try it I'll update the review with my results.

Update: I was able to get the slotted prong adapter to work with the pontoon valves by adding two 018 o-rings (70 duro) to the outside of the adapter stem. You need two to make a seal against the plastic collar inside the valve base. I also added a foam pool noodle collar to make it float.
阅读更多

Randy
5.0 颗星，最多 5 颗星 Works great on Boston Valves
2017年8月13日 - 已在美国亚马逊上发表
已确认购买
I bought this gauge to use with my Aquaglide Chinook XP Two inflatable kayak. The kayak uses 3 Boston Valves, and the adapter that came with the gauge fits it perfectly. It's very useful to have since I noticed that it is very easy to over-inflate the kayak using a double action pump (my kayak inflates to 1lb and 2lbs psi). With the Boston Valve, it does not lose air pressure when testing using this gauge. So far very happy with it.
阅读更多
3 个人发现此评论有用