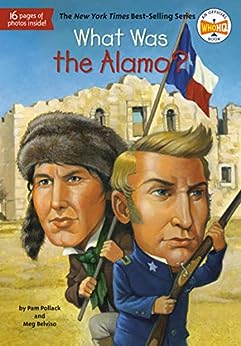 What Was the Alamo? (What Was?) (English Edition) Kindle电子书

英语版本 Pam Pollack (作者), Meg Belviso (作者), Who HQ (作者), David Groff (插图作者) & 1 更多 格式: Kindle电子书
属于：What Was?（61 本书）
|
分享
分享 <分享样章>
广告
显示所有 格式和版本 隐藏其他格式和版本
"Remember the Alamo!" is still a rallying cry more than 175 years after the siege in Texas, where a small band of men held off about two thousand soldiers of the Mexican Army for twelve days. The Alamo was a crucial turning point in the Texas Revolution, and led to the creation of the Republic of Texas. With 80 black-and-white illustrations throughout and a sixteen-page black-and-white photo insert, young readers will relive this famous moment in Texas history.
阅读更多
Previous page
Next page
›  查看更多商品促销信息

jiffy
3.0 颗星，最多 5 颗星 The Story of the Alamo for the Middle Grades
2019年7月14日 - 已在美国亚马逊上发表
已确认购买
I'm a Vermonter who has never been to Texas, but I've always had a special interest in the Alamo and those who defended it, and I've read several books on the subject. This 108-page book, written for children in the middle grades, tells the story simply and concisely, explaining what happened and why. It has pen and ink drawings on almost every page and a 16-page section of photographs and maps. I would probably recommend it to children who want to learn about the Alamo. But I do have some concerns. First, while the illustrations are useful and important to the book, several of them show facial expressions that are inappropriate to the circumstances, and I found that somewhat jarring. Second, while it may be commendable to present heroes as human beings with human faults, the fact that Travis kept a diary of his relationships with women has no relevance to the battle and adds nothing worthwhile to a children's book. Third, James Bonham, a favorite of mine, is not mentioned. He reportedly carried a message asking for help and when it was denied, he returned to the Alamo to tell Travis and to die with the others. That story, as fact or tradition, deserves to be told. Children should regard the book as an introduction to the Alamo and move on from there.
阅读更多
17 个人发现此评论有用

Marni Mees
5.0 颗星，最多 5 颗星 It was great, I actually learned a ton as an adult
2015年12月28日 - 已在美国亚马逊上发表
已确认购买
My 6 year old daughter visited the Alamo with her grandparents and came home asking ALOT of questions to which I didn't have answers....so we snagged this book!

It was great, I actually learned a ton as an adult. There are risqué topics...many of Texas' founding fathers were alcoholics, slave owners, or had affairs on their wives. They didn't harp on these topics but the book did not shy away from the truth about each person. I LOVED that. I think its really great for my kiddo to learn now that no one is perfect, even if they are heroes.

I immediately bought another book in this series. It has been rare that my girl has expressed interest in non-fictional reading and she is pretty excited to pick up another one. History for the win!!!!

Sandra L. Velvel
5.0 颗星，最多 5 颗星 sooooooooo good
2019年5月8日 - 已在美国亚马逊上发表
已确认购买
I live in la jolla California but i've been to texas and I didn't want to learn about the Alamo but this book makes me think I am plain stupid. I know why Houston is named Houston.I know why there's a college called Stephen F.Austin.I know so many things I wouldn't of known if i didn't read this book.I loved it
阅读更多

Betony
5.0 颗星，最多 5 颗星 Teacher's Favorite
2019年12月14日 - 已在美国亚马逊上发表
已确认购买
My daughter used this book for a school report. As an ELA teacher I'm familiar with the series and I'm a big fan. The books give specific information that is relevant. The presentation is engaging and just the right amount.
阅读更多