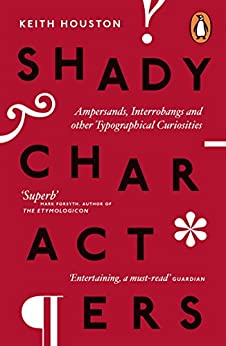 Entertaining, informative, a must-read. If ever a book deserved its hardbacked, reverse-embossed, lavishly illustrated, thick white heavy paper incarnation, and a place on an actual bookshelf, it is Shady Characters. (Guardian)

Engaging typographical journeys . . . Houston brings to life a history of ingenuity and imagination (The Times)

Houston brings considerable wit to the 5,000-year-old enigma of how we attempt to communicate our thoughts through visible signs . . . Shady Characters might make you look at books - in print or online - in an entirely new way (Nature)

Refreshing . . . the stories he uncovers along the way are fascinating (Telegraph) --此文字指其他 kindle_edition 版本。

Keith Houston started writing about the stories behind different marks of punctuation back in 2008 and soon discovered that they wove a fascinating trail across the parallel histories of language and typography. He is the founder of ShadyCharacters.co.uk where he brings these typographic raconteurs into the light of day. --此文字指其他 kindle_edition 版本。

Amazon Customer
4.0 颗星，最多 5 颗星 Don't buy this book for Kindle
2013年10月9日 - 已在美国亚马逊上发表
已确认购买
The nonstandard characters used in the book render as microscopic; I can't find a fix for this, and it happens both on the Kindle Paperwhite and the Kindle Android app. The parts of the book that I can read are interesting, but I'm missing a lot with the rendering deficiency. Frankly I'm a bit shocked that a publisher would let this go to market in this condition. Perhaps the paper version is more legible.
阅读更多
91 个人发现此评论有用

Pete from across the River
5.0 颗星，最多 5 颗星 Entertaining, funny, and educational -- a must read if you're interested in typography or writing.
2018年5月26日 - 已在美国亚马逊上发表
已确认购买
This is an excellent book and (much as I hate to admit it) it's one of the best that addresses the history of the various glyphs used to indicate punctuation in context with the development of the modern book. Keeping in mind that books first appeared in about 280 c.e., they have had nearly 1800 years of experimentation and development. (Prior to books, long form writing was published on scrolls -- which were not treated as one long page (endlessly "scrolling" as a word processing file on a computer) but were actually "paginated" with text written in columns at a right angle to the direction of the scroll (i.e. the scroll was unrolled from the right and re-rolled on the left as the text was read). Scrolls were made from papyrus, a reed common to marshes in the eastern Mediterranean region. Papyrus was relatively easily processed into a writing substrate. Animal skins had also been used for writing, dating back to as early as 2750 b.c.e., but papyrus was much less expensive and easier to deal with. Of course, clay tablets have a history going back to at least 5000 b.c.e. as a writing substrate (but clay tablets have many disadvantages for use with long documents).

The first real books appeared in the ancient Greek city of Pergamon, located in what is now western Turkey. Pergamon, a regional center where animal hides were processed, had established a library that was attempting to compete with the library at Alexandra. In this competition, Egypt put sanctions on Pergamon and cut off their supply of papyrus. The hide processors of Pergamon had developed a method that stretched animal hides very thin, creating "vellum" that proved to be an excellent writing substrate--that was perfect to fill-in for the papyrus that was no longer available. Since vellum is not very flexible, stitching it into scrolls was not a practical solution ... however, some clever scribe stitched a stack of vellum pages together on one edge, creating the first book... a practicality that was adopted quite quickly.

As Shady Characters goes on to explain, the layout of words in books (and in scrolls before) were determined to need extra marks that would assist in the understanding of the text... developments that, at times, took centuries (some innovations came much more quickly, as circumstances and needs changed). Indeed, Shady Characters is a complementary book to Letter Perfect: The Marvelous History of Our Alphabet from A to Z by David Sacks (a book I read many years ago) but is still in print and available on Amazon.

During his chapter discussing the hyphen (and the impact of the mechanical typewriter) the author describes a drop in quality (of typography) when the hot metal Linotype and Monotype machines came into being. Indeed, it is a repeated reality that each time there was a significant technological improvement (from hand scribed manuscripts to movable type printing, from individually set type, to "hot metal" type casters (Linotype/Monotype and other machines), from "hot metal" to "cold (photographic) type", and finally from dedicated photo typesetting machines to use of general purpose computers) these transitions have all gone through a pattern where the newest technology is a backward step in quality but with a large increase in productivity. (Apparently, the author is of an age where he only experienced an "after the fact" transition, where I "lived through" the transition from dedicated type composition equipment to the era of the general purpose computer (PageMaker, Ready, Set, Go!, QuarkEXpress and finally InDesign). I note that each of these transitions (and transitions from letter press to offset press printing) all were criticized for their initial lack of quality compared to the out-going technology. But eventually, the new technologies at each major step developed sufficiently to exceed the quality (as well as the productivity) of the earlier processes.

I note that I supervised a book-oriented typesetting service in San Francisco (doing work for major publishers) during the transition from dedicated phototypesetting machines to "desk top publishing." Our equipment produced beautifully typeset books, using highly skilled technicians who understood typography and the arcane commands inserted into the text to accomplish the desired output. The 6-employee "work positions" our system provided cost several hundred thousand dollars and had a "software maintenance cost" over $50,000 per year. (A new typeface cost $1000, and up -- and took hours to install into the system.) In contrast, a Macintosh computer and laser printer, with all the necessary software could be purchased for somewhat less than $10,000, with ongoing upgrades costing less than $1000 per year -- and typefaces available for relatively modest fees. Is it any wonder that commercial typesetting companies where in serious "hurt" facing these economics. (Indeed, the company I managed, was not able to survive the transition... the owner simply could not afford the necessary investment to retire his old system and install desk top publishing equipment as the remaining overhead made the company non-competitive with the developing "cottage industry" of independent "DTP" services. Indeed, by the mid-1990s, I was operating as a self-employed book typographer out of my home. I also submit that TeX (a typesetting software system the author mentions) and InDesign (that uses the "H&J algorithm from TeX) are as capable (or more so) in their current state of development than the best of the prior generation of dedicated typesetting systems as we had in the typesetting service I once managed.

One small flaw in the book is the author's apparent acceptance of the myth (based on "study after study") that ragged-right text is easier to read than "obsessively justified" text present in "almost all modern books." Unfortunately this is not a clearly established fact. In my research, I have found very few studies of this topic. (Understandable, since it's not an area where academics have much interest.) I suggest comparing the results of the reading comprehension studies used by Colin Wheildon in Type & Layout (first copyright 1984, but updated in current edition) vs. Karen A. Schriver's Dynamics in Document Design (1997) where "readability" was the considered factor. First, "readability" is not the same as "comprehension" (or understanding of what was read). I submit that it's more important that the reader understand what they read rather than taking the viewpoint that it looks "readable." Mr. Wheildon reached the conclusion that "well set, fully justified text" provided better reading comprehension than "well set, ragged right" text. The physiological aspect probably has to do with the regularized eye movement in fully justified text vs. the jumping around that occurs with ragged right. Ms. Schriver's book is, unfortunately, deeply flawed. Apparently, in preparing the samples for her "readability" surveys, informally prepared brochures taken from social service agencies were one of the primary sources. Most of the samples (reproduced in her book) show poorly "typeset" documents (obviously prepared using the primitive word processing programs of the era by people who had no training in typography). Most of the samples show Courier (typewriter, fixed width type) set with extra word space used to justify the text. Well, readability (comprehension was not tested) would certainly drop when these factors are involved. In my opinion the Dynamics in Document Design uses very poor examples to "prove" that ragged right is "better" -- but I think the only real conclusion (from Dynamics in Document Design) is that very narrow columns of text might best be set in ragged right, with longer columns (such as in the typical book) are better set fully justified. (I note that Shady Characters is typeset in the traditional fully justified format.)
阅读更多
加入亚马逊Prime，从此免运费
亚马逊Prime会员可享海外购美/英/日/德跨境免邮，全年无限次！更有免费无限次阅读电子书服务
> 立即加入
了解我们
合作信息
帮助中心和购物指南