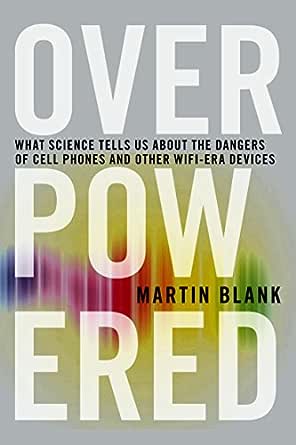 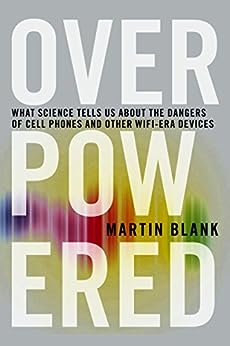 Overpowered: The Dangers of Electromagnetic Radiation (EMF) and What You Can Do about It (English Edition) Kindle电子书

Steven Schneider
2.0 颗星，最多 5 颗星 Some valid points, but overall risk likely overblown
2017年7月23日 - 已在美国亚马逊上发表
已确认购买
This is an interesting book, but I find this author guilty of something many authors do when sharing research results. He refers to the change in the probability of a bad outcome and the statistical significance of the change, but never tells you the base probability or the absolute probability. I looked up one of the research papers he references on bad health outcomes related to living close to power lines. The authors of that paper do find higher rates of bad outcomes, but the higher rates are still very small. Here's how this technique works. I tell you that the probability of cancer doubles if you use a hair dryer. What I don't tell you is that it doubled from 1 in one million to 2 in one million. While the doubling is true, the absolute elevated risk is still very small. While I agree with the author on a number of points, I think he exaggerates the overall risk of electromagnetic radiation. It is probably not smart to have a cell phone at your head for extended periods. Use a headphone or speaker. And his points about companies cherry picking researchers are good. But if the overall risk was really as bad as the author suggests, wouldn't we be seeing life expectancy dropping?
阅读更多
20 个人发现此评论有用

rickzz
4.0 颗星，最多 5 颗星 Good book- but which health threat should we really be worried about?
2020年2月1日 - 已在美国亚马逊上发表
已确认购买
PRO: This is the best EMF book I've read overall because it has the most details on the basic science.

CON: Overpowered was published back in 2013 so it's somewhat outdated. Blank (who died in 2018) cites WIMAX (which is now dead) instead of 5G as a concern. The book also predates Martin Pal's VGCC (calcium channel) hypothesis, which has attracted considerable attention due to Pal's alarmist views.

The key point of the book is that numerous studies (using animal and cell culture models) show that non-ionizing EMF does have a biological effect. It's long been assumed that non-ionizing EMF can't have an effect because the (f)requency is too low per E=hf to affect electron energy levels. (Chemistry is largely determined by electron bonding.) Blank argues that safety standards, which do NOT take this into account, have to be updated and the public should take precautionary measures like limiting exposure to wireless devices and not living near cell phone towers and high-power electric lines.

I now turn off all of my wireless devices at night as a precaution. However, I still think it's likely the negative effects are overstated. CHs 4-5 discuss how EMF damages DNA and may be carcinogenic. However, DNA damage isn't necessarily a concern- our cells have trillions(!) of mutations per day. The vast majority don't matter because up to 98% of our DNA is "junk" and our cells have self-repair/destruct mechanisms.

It's estimated that ~50% of medicine is wrong. As explained in "Rigor Mortis", the primary reason is that biology is so complex. Animals and cell cultures are poor substitutes for humans and many results obtained from such experiments are N/A to actual human health. E.g., dozens of cancer treatments, which work in mice, have failed to work in humans. Blank alludes to such difficulties in CH8 when he mentions that some experiments, which have NOT found a negative effect for EMF, were conducted under slightly different conditions from those that do, which is a sign the negative effect isn't "robust". Even if a negative effect is "real", it may not matter for all practical purposes, if the effect is "tiny" (e.g. something may increase your cancer risk by 10x but if the absolute risk increases from 1 in 1 million to 10 in 1 million, then it should be ignored vs. more impactful factors).

Despite my skepticism, EMF may very well be a problem. Blank cites observational studies which say that people who live close to cell phone towers have more health issues. Some people are also "electro-hypersensitive" and have to move to low-EMF areas. However, no long-term human randomized clinical trials have been done and correlation is NOT causation so it's TBD if these concerns are genuine. Blank acknowledges the uncertainty but strongly recommends action anyway per the precautionary principle.

I've read numerous health books and I don't know which health concern we should really be worried about:
1) Books like "Fat Chance" and "The Case Against Sugar" contend sugar is bad for us and may even be carcinogenic because it causes insulin resistance. "Grain Brain" goes even further and says that numerous neurological issues (including Alzheimer's) are due to gluten/carbs/sugar. (Blank also suggests EMF could be a causal factor in Alzheimer's so who's right?) Back in the 1970s, the precautionary principle (which Blank advocates for EMF) was the basis for wrongly demonizing saturated fat, which led to increased carb and sugar consumption- perhaps the root cause of the current obesity/diabetes epidemic.

2) Light at Night (LAN) may be carcinogenic as well. A 2019 paper also says that LAN can cause permanent brain damage in hatchling chicks- it's TBD if this applies to human newborns. LAN disrupts sleep and reduces melatonin levels- both of which protect against DNA damage/cancer. LAN has gotten worse with the advent of modern fluorescent/CFL/LED lighting which has much more blue light vs. incadescent bulbs.

The flip-side of LAN is that we may not be getting enough sunlight during the day (which is much brighter than indoor lighting and also produces far more vitamin D than can be obtained from diet alone) due to misguided fears of skin cancer. (Too much sun is bad for us but too little sun is even worse.)

3) Both "Curable" and "Statin Nation" mention that loneliness and increasing social isolation have a bigger impact on mortality than diet, smoking and exercise. Perhaps the content of EMF (e.g. social media) is worse for our health than the EMF itself.

Bill Curry
4.0 颗星，最多 5 颗星 My opinion of Dr. Martin Blank's recent book published by Amazon.com
2014年5月26日 - 已在美国亚马逊上发表
已确认购买
Dr. Blank is a superb bioelectromagnetic scientist. He and His colleague Dr. Reba Goodman, both retired from Columbia University and contributed much to the understanding of modern understanding of how radiation at various frequency ranges and radiation density levels interact with living tissues with both positive and negative implications for human health. I am a physicist, but this book really improves my understanding of the biophysical processes that so strongly affect the outcome of exposing living tissues to the radiation from modern devices of great personal usefulness,
阅读更多
41 个人发现此评论有用

Nathan W
5.0 颗星，最多 5 颗星 A must read for anyone living in today's modern world
2016年8月1日 - 已在美国亚马逊上发表
已确认购买
This is a must read for anyone living in today's modern world. Electromagnetic Fields or EMFs are the smoking of today's age. In fact they are much worse than smoking because you can't see or smell them though a percentage of the population does have electromagnetic sensitivities and literally can feel them. EMFs come from technology and technology is cool and makes our lives easier. Smoking is disgusting to most of us so it's not a big leap to believe it's harmful. There are now more cell phones in the US than people and most people have tablets, laptops, and other devices that run on wireless networks and this massive increase in EMFs is driving much of modern day disease. The wireless industry is employing the same strategy used by big tobacco in denying EMFs are harmful. We know beyond a doubt that these EMFs are harmful, not just to human life, but all life on our planet.

The problem is most of us are exposed to these fields 24/7 and with the roll out of 4G to 5G there will be even stronger EMFs to contend with. There is a lot of misleading research by the wireless industry. The US government does not fund research and it's hard for independent researchers to get the funding they need however the evidence has been in since the 1950s and exposure has become exponentially worse since then. Occasional exposure is not an issue for most of us. It's the chronic exposure that causes disease so these studies need to be done over a period of several years to really be effective.

Dr. Martin Blank has been studying the effects of EMFs for 30+ years. His book is well written, easy to read, and is backed up by lots of published research. Do yourself a favor and read this book and then decide if EMFs and radio frequencies (RF) in particular are harmful to your health. And please be aware...they are much worse for babies and children.

There are some practical things that you can do to reduce your risk such as turning off your wifi at night, putting your cell phone in airplane mode when not in use, and avoid fluorescent lights to name a few. Whether you realize it or not you're part of a huge experiment. Humans have never been exposed to these levels of EMFs before. Don't wait for your friends or family to drop dead from cancer or a brain tumor before taking action.
阅读更多
17 个人发现此评论有用
加入亚马逊Prime，从此免运费
亚马逊Prime会员可享海外购美/英/日/德跨境免邮，全年无限次！更有免费无限次阅读电子书服务
> 立即加入
了解我们
合作信息
帮助中心和购物指南