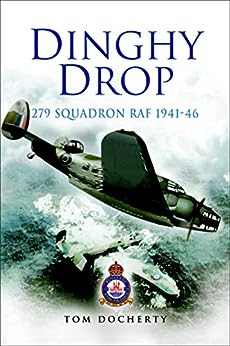 英语版本 Tom Docherty (作者) 格式: Kindle电子书
|
分享
分享 <分享样章>
广告
显示所有 格式和版本 隐藏其他格式和版本
September 1941 approval was given for the formation of two long-range Air-Sea Rescue squadrons. No 279 Squadron was formed at Bircham Newton in Norfolk. In the period leading up to the formation of the squadron there had been much work done in relation to air-dropped survival equipment such as the Lindholme Dinghy Dropping Gear, the Bircham Barrel and the Thornaby Bag. These contained such items as water, food, first-aid kits and distress signals. 279 was the first squadron to employ the airborne lifeboat, which was carried beneath the bellies of the portly Hudson. In January 1942 a practical boat, fitted with oars, sails and engines was put into production with the intention of slinging it under the bomb bay of the Hudson and to drop it by parachute. In October 1944 the Squadron re-equipped with Warwick Mk I aircraft moved to Thornaby in the NE of England. By now its ASR net was cast wide and there were detachments at Tain, Fraserburgh, Wick and Banff (all in northern Scotland) and Reykjavik.
阅读更多
Previous page
Next page
›  查看更多商品促销信息

VikingBerserker
5.0 颗星，最多 5 颗星 Excellent Read!
2012年9月10日 - 已在美国亚马逊上发表
已确认购买
A lot of books have been written on the British/American Fighter Squadrons and Bomber Squadrons based in the UK. As they returned from the mission in Europe, perhaps damaged in battle or even having mechanical problems a number of them had to ditch in the ocean. If they were lucky enough to send out an SOS before the crashed, they might be saved. If not then their only hope would be if another plane might spot them and send help. This is a book about some of the unsung heroes in the air war: The 279 Long-range Air-Sea Rescue Squadron of the RAF.

The book is 259 pages long divided into 9 Chapters, 15 Appendixes, Acknowledgements, Bibliography & References, an Index and contains a nice assortment of pictures.

It details the formation of the unit in 1941, the experiment and implementation of a fully equipped air dropped life boat until the Squadron ceased operations as the 279 in 1946. It also lists the aircraft flown (Armstrong Albemarle, Lockheed Hudson, surprisingly the Hawker Hurricane, Avro Lancaster, Supermarine Sea Otter, and the Vickers Warwick) and the 15 crews they lost in service.

The issues with the air dropped dinghy are pretty detailed as well as the supplies they were packed with. The plane would drop the boat, parachutes would open to gently land in the ocean, then rockets would fire carrying ropes out of the side to allow crews in the water to grab a hold of them. The parachutes would not always open the way they should and the boat would become lethal to the people below. Imagine - you freeze on the way to the target, you are blasted with flak, shot up from fighters, survive a crash landing only to be bonked on the head from a life boat traveling at 100 mph from the air. "Hi honey, how was your day????"

In the end the squadron saved almost 2,000 USAAF crews and over 3,700 British from the coast of Norway to the coast of Iceland, sometimes in weather or conditions that no sane man would ever try to fly in.

It's a wonderful tribute to those that lived to save others.