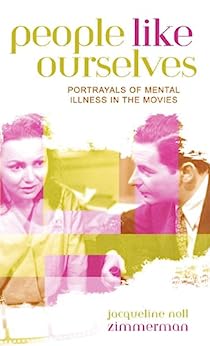 People Like Ourselves: Portrayals of Mental Illness in the Movies (Studies in Film Genres Book 3) (English Edition) Kindle电子书

英语版本 Jacqueline Noll Zimmerman (作者) 格式: Kindle电子书
|
分享
分享 <分享样章>
广告
显示所有 格式和版本 隐藏其他格式和版本
The stigmatization of mental illness in film has been well documented in literature. Little has been written, however, about the ability of movies to portray mental illness sympathetically and accurately. People Like Ourselves: Portrayals of Mental Illness in the Movies fills that void with a close look at mental illness in more than seventy American movies, beginning with classics such as The Snake Pit and Now, Voyager and including such contemporary successes as A Beautiful Mind and As Good as It Gets. Films by legendary directors Billy Wilder, William Wyler, Alfred Hitchcock, Stanley Kubrick, Oliver Stone, Martin Scorsese, Francis Ford Coppola, and John Cassavetes are included. Through the examination of universal themes relating to one's self and society, the denial of reality, the role of women, creativity, war, and violence, Zimmerman argues that these ground-breaking films defy stereotypes, presenting sympathetic portraits of people who are mentally ill, and advance the movie-going public's understanding of mental illness, while providing insight into its causes, diagnosis, and treatment. More importantly, they portray mentally ill people as ordinary people with conflicts and desires common to everyone. Like the motion pictures it revisits, this fascinating book offers insight, entertainment, and a sense of understanding.
阅读更多
Previous page
Next page
›  查看更多商品促销信息