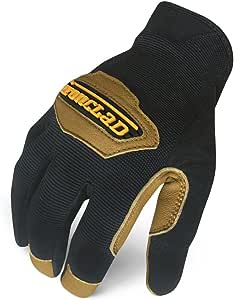 gk86
3.0 颗星，最多 5 颗星 Good, really good, but not great
2014年5月22日 - 已在美国亚马逊上发表
已确认购买
This spring I decided that due to some extra time on my hands I was going to put in a vegetable garden. This seemingly simple task quickly rolled into a rather large project. The project included taking down several trees, removing years worth of brush, removing contaminated top soil from the entire plot, digging ditches for walk ways, hauling crushed stone for the walkways, hauling new top soil for the garden, building and installing raised bed walls, digging trenches for burying and installing fences, etc.. etc..

It became apparent very quickly that the habor freight cheap-as-humanly-possible gloves I had weren't going to cut it for all of this work. I wore through two pairs in just a few days. So after as much research as one could do on some gardening gloves (maybe an hour before my head was ready to explode) I landed on these guys. Im a big guy - pushing 6'4, 230 lb, things have a tendency to not fit. I ordered size large, which are very form fitting to my hands (what I wanted) and maybe JUST maybe a smidge too short (like a few mm) I like the feel, they're comfortable, the sweat band on the thumb was a nice touch...I wore these guys for the majority of this project and was happy until about a week or so ago when the seam at the tip of the middle finger on my right (dominate) hand started to split and wear away. Now the tip of my middle finger is exposed and I'm a bit bummed out. Had they held up for the whole project and lasted through the growing season...I would have given them five...but the finger blowing out before the end of the project....one that they really should have survived...I don't think I would get them again.

Boomersays
1.0 颗星，最多 5 颗星 Used these gloves for years they are no longer durable
2017年8月14日 - 已在美国亚马逊上发表
已确认购买
I've been using these gloves for years in particular the cowboy gloves. The pair I had before lasted me close to a year. The newest pair that I just bought went a day and I had a hole in the index finger. They looked different but I figured they'd be just as durable. I was wrong these new gloves are not worth the $25. I use only premium quality gloves and these no longer are in that category.
阅读更多
2 个人发现此评论有用

M. Hoffman
5.0 颗星，最多 5 颗星 Love these gloves. Well assembled and fit perfectly
2017年8月20日 - 已在美国亚马逊上发表
已确认购买
Although the price is a little high, these are well designed and comfortable gloves. Third pair of Ironclad gloves. Have held up well, with the exception of a small hole that opened up on the index finger of one pair. BUT the company honored their warranty and sent me another pair. The fit and touch are worth the price.
阅读更多
2 个人发现此评论有用

TDKinDallas
3.0 颗星，最多 5 颗星 Newer model is still good, but not what I was looking for.
2015年6月16日 - 已在美国亚马逊上发表
已确认购买
This item has a newer model and the picture may still be wrong. I have included a picture of the new gloves and they are still great gloves, but they have changed the wrist to a smaller version that made the glove harder to put on and that is a big selling factor for me...how quickly I can take them on and off. Still a very high quality glove and the company returned the item no problem...excellent communication.
阅读更多

Carrie
5.0 颗星，最多 5 颗星 Great work gloves
2018年10月20日 - 已在美国亚马逊上发表
已确认购买
I have horses and wear these everyday. my first pair lasted me 6 years! I love them. they are comfortable and easy to work in, but they protect your hands. great gloves for the money.
阅读更多
加入亚马逊Prime，从此免运费
亚马逊Prime会员可享海外购美/英/日/德跨境免邮，全年无限次！更有免费无限次阅读电子书服务
> 立即加入
了解我们
合作信息
帮助中心和购物指南