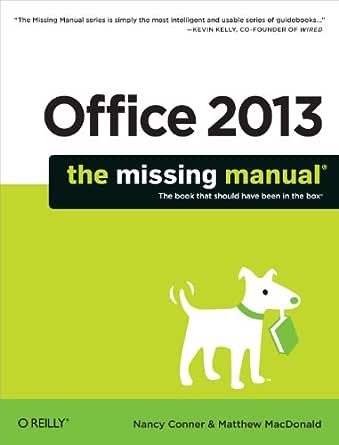 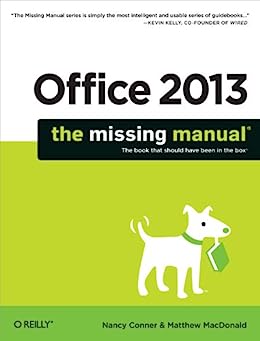 Nancy Conner has a PhD in English from Brown University and has taught writing, including technical writing, to college students for more than a dozen years. She is currently a freelance author and copyeditor specializing in technical books, and has written on topics ranging from classical mythology to Google Apps to the MS Office suite. Matthew MacDonald is a science and technology writer with well over a dozen books to his name. Web novices can tiptoe out onto the Internet with him in Creating a Website: The Missing Manual. HTML fans can learn about the cutting edge of web design in HTML5: The Missing Manual. And human beings of all description can discover just how strange they really are in the quirky handbooks Your Brain: The Missing Manual and Your Body: The Missing Manual. --此文字指其他 kindle_edition 版本。

J. Hand
5.0 颗星，最多 5 颗星 You really can't 'miss' with any of the "Missing Manual" series!!!!!
2015年2月27日 - 已在美国亚马逊上发表
已确认购买
I have raved about the Missing Manual series ever since I first used them with Windows XP and Office 2010. This is no exception! There's more here that covers all the programs in the Office suite than most program specific manuals by other people.

In my case I use some of the Office Suite programs much more than others, but I do use them all. That's what's so great about this book- so far everything I needed to know is there and it's easy to find. It's hard to describe how well the Office suite as a whole is covered in this one book!

As I go along I will be getting Missing Manual books for Access and Excel individually to get a fuller, more advanced understanding of those programs.

S. Seal
2.0 颗星，最多 5 颗星 Not up to par with other Missing Manuals
2014年12月30日 - 已在美国亚马逊上发表
已确认购买
OK for people who know nothing about Office, a great paperweight for anyone looking for in-depth help. I've used and loved other missing manuals, so I was very disappointed when this one left me high and dry. The publisher sacrificed depth for the sake of breadth, since this book purports to help with the entire MS Office suite. Yes, the programs are integrated now, but if you need help with a specific program like Word, Access or Excel, get a different book.
阅读更多
7 个人发现此评论有用

CraigS
2.0 颗星，最多 5 颗星 Not detailed enough
2014年5月3日 - 已在美国亚马逊上发表
已确认购买
As a long-time Office 2007 user, I bypassed the upgrade to Office 2010, and just upgraded to Office 2013 in April 2014. I expected a decently detailed explanation of the new features not available in previous renditions of Office. What I found was a rather high level introduction to WORD, EXCEL, PowerPoint and Outlook covering things I already knew. Examples abound but for discussion purposes I will focus on EXCEL. For example, the new Quick Analysis tool is only mentioned on page xix; there is no how-to coverage in the EXCEL chapters. For EXCEL features that have been around a while, such as one- and two- dimensional Data Tables or Pivot Tables, there is no coverage of them at all (at least I couldn't find any), so if EXCEL 2013 is a user's first exposure to EXCEL, there is no guidance on how to use these tools. Finally, it would have been nice to have a decent discussion of the new or revised functions that have been added. Example - it took me quite a bit of work to discover that LOGNORMDIST has been changed to LOGNORM.DIST with options to calculate either the cumulative distribution function or the probability density function.
阅读更多
6 个人发现此评论有用

Forest Reader
5.0 颗星，最多 5 颗星 Very, very helpful
2014年2月8日 - 已在美国亚马逊上发表
已确认购买
I would call this is a required manual. I'm working my way through it slowly, trying to apply everything as I learn it. I was used to Office 2003, so I missed learning all the updates in between. I'd recommend this to anyone who wants to master Office.
阅读更多
11 个人发现此评论有用
加入亚马逊Prime，从此免运费
亚马逊Prime会员可享海外购美/英/日/德跨境免邮，全年无限次！更有免费无限次阅读电子书服务
> 立即加入
了解我们
合作信息
帮助中心和购物指南