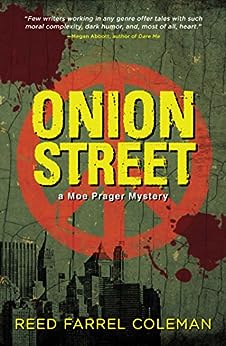 It's 1967 and Moe Prager is wandering aimlessly through his college career and his life. All that changes when his girlfriend Mindy is viciously beaten into a coma and left to die on the snow-covered streets of Brooklyn. Suddenly, Moe has purpose. He is determined to find out who's done this to Mindy and why. But Mindy is not the only person in Moe's life who's in danger. Someone is also trying to kill his best and oldest friend, Bobby Friedman.

Things get really strange when Moe enlists the aid of Lids, a half-cracked genius drug pusher from the old neighborhood. Lids hooks Moe up with his first solid information. Problem is, the info seems to take Moe in five directions at once and leads to more questions than answers. How is a bitter old camp survivor connected to the dead man in the apartment above his fixit shop, or to the OD-ed junkie found on the boardwalk in Coney Island? What could an underground radical group have to do with the local Mafioso capo? And where do Mindy and Bobby fit into any of this?

Moe will risk everything to find the answers. He will travel from the pot-holed pavement of Brighton Beach to the Pocono Mountains to the runways at Kennedy Airport. But no matter how far he goes or how fast he gets there, all roads lead to Onion Street.
阅读更多
›  查看更多商品促销信息
该系列中的图书（9 本书）
完整系列
Moe Prager
Kindle电子书
页 1 共 1重新开始页 1 共 1
Previous page
Next page

"The seventh outing (after Hurt Machine) for PI (and former NYPD cop) Moe Prager makes an effective coming-of-age prequel, explaining how he got into police work in the first place. Coleman has won multiple awards for his gritty but soulful series, and this entry is of that same high caliber. Don't miss it." --Library Journal"Coleman's latest - a prequel to the award-winning Moe Prager series - is a slam-dunk recommendation for readers drawn to smart, gritty, crime fiction with label-defying characters. Coleman . . . nicely balanc[es] plot and action." --Booklist, Starred Review"Edgar-finalist Coleman's outstanding eighth Moe Prager mystery (after 2011's Hurt Machine) explains how the NYPD detective turned PI became a cop. The 2012 funeral of an old friend prompts Prager to recount the complex history he shared with the dead man, Bobby Friedman. The twists and turns are unpredictable, but Coleman pulls everything together by the end." --Publisher's WeeklyStarred Review"Very entertaining company on the beach before the summer slips away." --Penthouse"The story is exciting enough by itself, it's simply a good mystery story, but what makes it so great is the little pieces of foreshadowing of Prager's future . . . An interesting character study as well as a piece of good historical hardboiled fiction. This one's recommended. Highly." --Sons of Spade blog"Moe Prager fans are in for a treat as novice crime fighter Moe attempts to solve this convoluted case, giving insight into the cop, PI, and man he eventually becomes. [Coleman] . . . paint[s] a setting so vividly that readers are immersed in the dreariness and despair of 1967 Brooklyn, makes for a book that's difficult to put down." --Mystery Scene Magazine"There's a lot to enjoy here. It's a book that many Moe fans will enjoy. It's also one that newcomers might find interesting and, in case they don't already know, there's a lot to come if they become hooked." --Sea Minor blog"For long-time fans of Prager and creator Reed Farrel Coleman, the novel sheds a new and welcome dimension on a long-admired and much-beloved protagonist. It provides a sharp and clearly defined literary snapshot of a tumultuous era . . . The element that I enjoyed most about the book was the manner in which it presented its host of street characters, all of whom had real-life counterparts in the life of anyone who was of age during the 1960s . . . Onion Street is worth reading for that reason alone." --BookReporter.com"Coleman . . . use[s] the late Sixties, as well as [his] prose poet style, to look at [his] characters in fresh and exciting ways." --Mystery People"The bones of this story is your typical noir, though Coleman, the master of the twist, never lets the story stray into formula. This story is very organic, and several details resonated with me. Freed from the constraints of a series, Coleman has written what is probably his best novel yet." --Edged in Blue"A satisfying addition to the series, demonstrating Coleman's trademark humor, twisty plotting, well-developed characters, and an evocative and authentic portrait of the author's beloved Brooklyn. For those who have not yet discovered the series, Onion Street is an excellent place to start." --Reviewing the Evidence"A deep moral story involving right and wrong . . . Moe s various actions can be questioned, while his intentions are always honorable. All in all, it is a very human saga, and we get to know Moe a lot better in a serious way. Recommended." --Spinetingler Magazine" --此文字指其他 kindle_edition 版本。

audrey frances
5.0 颗星，最多 5 颗星 superb sequel to a wonderful series
2013年10月15日 - 已在美国亚马逊上发表
已确认购买
There were seven books in the Moe Prager series: Walking the Perfect Square, Redemption Street, The James Deans, Soul Patch Empty Ever After, Innocent Monster and Hurt Machine, and in the last book it seemed ambiguous about whether or not Moe would be back. Now we get a prequel, which was a bit alarming -- was it a signal that Moe wouldn't be coming back in any new cases? But I needn't have worried. Or, rather, it's still sort of ambiguous, which is sort of good news, right? In Hurt Machine Moe has been diagnosed with stomach cancer, but he doesn't want to tell anyone until his daughter Sarah's wedding is past so he doesn't spoil it. As this book opens we see Moe and Sarah talking several months later. Moe has been through chemo and so far so good, but no bed of roses either. Sarah is visiting and asks him how he became a cop, so we get to hear Moe's tale of 1967. He's going to Brooklyn College as much to get out of the draft as anything else, because he still doesn't know what he wants to do. He envies his brother Aaron and his best friend Bobby because they seem to already have a good sense of where they're going and the confidence that goes with that. The story opens with him bailing Bobby out of jail after an anti-war protest. When he gets back to his girlfriend, she's acting really strange, and warns him to stay away from Bobby. The next day Bobby is almost run down by a car and his girlfriend is beaten and in a coma. Moe decides to find out what's going on, and so he comes into contact with several police officers in the course of his investigation.

It was a real blast getting to watch Moe solve his first case AND develop an interest in police work. The writing is wonderful. Of all eight Moe Prager books, there is not a loser in the bunch. Each is populated by intriguing, complex characters and bristling with sharp dialogue and twisty plots. This is a great series, and this prequel is tremendous. If you haven't read any of the series you could certainly read this one first, followed by Walking the Perfect Square and the rest, or you could read them in the order written. The advantage of the latter option is that you can see the beginnings of some of Moe's later ideas and situations. We're already hearing Aaron plan to open a wine shop with Moe as his partner. That guy really DID have his act together early!

If you're a fan of the series, this is a terrific addition to the canon. If you haven't tried these yet, you're in for a treat with Moe Prager, Jewish Coney Island cop and PI, here at the very beginning of his career -- a wise, decent guy who may not be good at planning business enterprises, but someone who is already smart, knows people, and has a strong sense of justice. This modern noir series is fantastic, and I think the best American competition to the great police procedurals coming out of Scandinavia lately.

Bemused Prof
5.0 颗星，最多 5 颗星 How does a nice Jewish boy become a cop?
2015年4月30日 - 已在美国亚马逊上发表
已确认购买
Coleman is one of America's greatest writers, and particularly a master of Brooklyn Jewish noir. The Moe Prager series is one of the best around. The characters seem alive and real, and the suspense is top notch. Coleman is one of those brilliant writers who unnfortunately never did catch on to super success, but he is better than many who did. Every one of the Prager books is some level of masterpiece. I avoided reading this for a few months, as I didn't have much interest in the notion of a backstory of what happened before Vol. 1. But, I was drawn in and devoured this excellent story. The only jarring note was that Moe, a lazy and inattentive college student, seems to in emergencies have more in common with John Rain or some other superhero. Unlike Rain (Barry Eisler's series about an assassin) Moe is just a college kid with concerns like borrowing his brother's car, but like Rain, although confused by the complex big picture he figures out all sorts of complex plays and dips. When caught, he somehow manages to escape, if not kill the assassins after him. People who have no ability to suspend disbelief for the sake of a great story (and Amazon reviews make it clear that there are such people) might give this a pass. People who want a great and satisfying story should be tapping their keyboard now, ordering up this book. Better yet, go back to the beginning and read them all in order.
阅读更多

Sandy
4.0 颗星，最多 5 颗星 Not my favorite in the series, but still better than much of the competition
2013年9月23日 - 已在美国亚马逊上发表
已确认购买
Since I've been reading this series in order and really enjoyed seeing Moe learn life lessons as he aged. it was a bit of a struggle to go back to college-age Moe. He hasn't yet learned the hard-won lessons of the aging Moe confronting his mortality in Hurt Machine, and I just prefer the old geezer. Nevertheless, it was a good read and moved Moe's life along in the beginning and ending sections. Even though this is a prequel, I wouldn't recommend starting with this book. Go back to the beginning of the series with Walking the Perfect Square and read the other books to get to know Moe first.
阅读更多
2 个人发现此评论有用

Lori
5.0 颗星，最多 5 颗星 gotta love Moe Prager
2013年8月1日 - 已在美国亚马逊上发表
已确认购买
I love the character, Moses Prager, and was thrilled to find another book.. This one was just as good as the others. Being a Long Islander makes the story a little more "real" and that adds to the fun of this series. I've read all of this author's books and find that he brings the characters to life with just enough local flair to make it interesting to me (it never seems fake or too much).The local stuff is a backdrop...it adds to the story but wouldn't put off anyone unfamiliar with our area. This book is a must read for all Moe fans! Keep them coming!!!
阅读更多