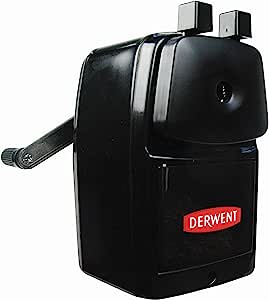 This manual desk sharpener has a helical blade that can sharpen different sized pencils, as well as produce an extra-long sharp point that is ideal for fine detail pencil work. It comes with a clamp that mounts the sharpener securely to a desk, and includes an auto-stop security feature. The durable metal pencil sharpener case stands 5.25 in height."

Keep your pencils sharp and ready to use.

Secure the sharpener to your desk or table easily with the included metal clamp or hold it comfortably in hand as you sharpen.

An old-fashioned hand crank engages the cutting edge of the durable china steel helical blade to spiral around your pencil’s core cleanly, efficiently and effectively, crafting your pencils to a super sharp, consistently extra-long point, every time you use it. A hand crank offers more control and the auto-stop mechanism prevents over-sharpening. The see-through reservoir tray conveniently slides away from the base for easy shavings disposal.

karolusf
5.0 颗星，最多 5 颗星 This great feature is not even mentioned on the box
2017年11月25日 - 已在美国亚马逊上发表
已确认购买
I have two of these, and I'm here to tell you about the most important feature of this pencil sharpener. This great feature is not even mentioned on the box, and it is why I have two of these. This great feature is hinted at in picture 6 of the paper instruction manual that is inside the box.
What goes wrong with all pencil sharpeners, including Derwent Super Points, can be easily fixed with the Derwent - other sharpeners I have had need to go straight to the garbage can. It is that sooner or later a pencil point will break off inside the mechanism, and block it up so you can only half-way sharpen pencils. With the Derwent, it is EASY to remove the sharpening mechanism and clear out whatever is stuck, and put it back together. Picture #6 in the manual shows how. It is done with the black ring behind the crank handle.

S. Johnson
5.0 颗星，最多 5 颗星 Worth every penny
2018年1月15日 - 已在美国亚马逊上发表
已确认购买
I had no idea what I was missing out on until I bought this pencil sharpener. I’ve been using the small Kum sharpeners for almost 20 years since I first received one in art school. I go through them too fast because the razor blade inevitably dulls and there are no replacement blades available so it gets expensive buying those. They also don’t do a long point. I daresay this pencil sharpener has been a game changer for me for doing fine details.
I have sharpened Prismacolor soft cores, Faber-Castell Polychromos, Derwent Inkense, Arteza Woodless Watercolors, derwent graphic pencils, Schpirerr Farben colored pencils, Blackwings, and Steadtler mars lumographs and they all fit and sharpened perfectly.
I don’t have it attached to anything, I put the pencil in and it securely clamps it in place so I can hold the top with one hand and turn the crank with the other and it works great.
The one downside I have found is some pencils don’t feel “done” so I have sharpened an extra inch or so unnecessarily. Now I sharpen 5 turns, take it out to check and do 5 more and repeat until it’s sharp. This thing could chew down an entire pencil very quickly if you aren’t careful.

DSOking
5.0 颗星，最多 5 颗星 I really liked it; it created a really sharp point in ...
2018年2月15日 - 已在美国亚马逊上发表
已确认购买
When I first got this sharpener, I really liked it; it created a really sharp point in no time and is really to install and use. However, I had to remove a couple of stars to the product after it suddenly stopped working properly. I now cannot sharpen any pencils, all it does is reduce the size of the pencils, the point either break or remains dull. I tried checking any issue with the sharpener, removing the handle/sharpener part, without any success. The crank turns "empty", with the pencil not moving in like it used to do. I had the product for a little over a month...
Back to regular, less expensive sharpeners for me.
EDIT:
After several days of trying to find a solution, I discovered (using a light to look into the barrel) that the issue was not a foreign object stuck there, but a build up from the pastels I was using). I tried several things to remove it (toothpick, pipe cleaner, and paper clip) none were successful. I eventually used a computer screwdriver, long and very narrow while strong enough to push the material out; that time it worked and the sharpener now functions as intended.