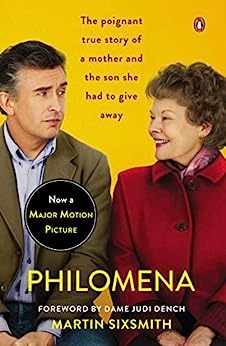 When she became pregnant as a teenager in Ireland in 1952, Philomena Lee was sent to a convent to be looked after as a “fallen woman.” Then the nuns took her baby from her and sold him, like thousands of others, to America for adoption. Fifty years later, Philomena decided to find him.

Meanwhile, on the other side of the Atlantic, Philomena’s son was trying to find her. Renamed Michael Hess, he had become a leading lawyer in the first Bush administration, and he struggled to hide secrets that would jeopardize his career in the Republican Party and endanger his quest to find his mother.

A gripping exposé told with novelistic intrigue, Philomena pulls back the curtain on the role of the Catholic Church in forced adoptions and on the love between a mother and son who endured a lifelong separation.
阅读更多
Previous page
Next page
›  查看更多商品促销信息

“The extraordinary story of an extraordinary woman . . . Philomena’s tale is special. . . . It reveals a remarkable human being with astonishing fortitude and a truly humbling willingness to forgive. . . . I hope Philomena’s heroic search and her courage in allowing her story to be told will bring comfort to all who have suffered a similar fate.” —Judi Dench, from the Foreword

“A powerful testament to the strength of the bond between mother and child.” —Shelf Awareness

“Heartbreaking . . . a story that needed to be told.” —The Independent

“Delves into a woman’s grief with restraint and sensitivity.” —Independent on Sunday

Martin Sixsmith is the author of several fiction and nonfiction books and is a former BBC journalist and director of communications for the British government. He lives in London.

Judi Dench is one of the world’s most celebrated actresses and has received numerous awards for her work, including eleven BAFTA awards, two Golden Globes, a Tony Award, and an Academy Award. Her most recent films are The Best Exotic Marigold Hotel and Skyfall. --此文字指其他 kindle_edition 版本。

Donna K
2.0 颗星，最多 5 颗星 Just ok
2016年6月29日 - 已在美国亚马逊上发表
已确认购买
It was an interesting book, but certainly not what I expected. I expected to read a book about Philomena, but she was in the story only in the early chapters and the epilogue. About half way through the book, I updated my status and noticed a review by one of the characters in the book stating how she had been interviewed, but her facts and dates were not reported accurately, nor her final review or permission ever requested or given for the information included in the book. From that point, I read the rest of the book as a historical fiction, despite the photos at the end. Yes, the story happened, but as told in the book? Probably not. And when I start reading a book about a particular person, I expect the book to be centered on their story. The information on the Irish homes for mothers and babies seemed to be credible (hard to believe, but credible). Based on conversations with my own birth mother in the US, even here, the mothers were considered sinners, and no real medical attention was obtained, even in the case of a breach birth, or complications, because the girl had sinned and any pain and suffering was a consequence of that. Overall, I was not pleased to read a "true story" that was not. (less)
阅读更多
10 个人发现此评论有用