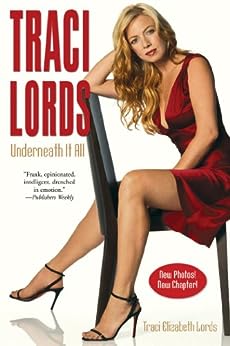 Traci Lords: Underneath It All (English Edition) Kindle电子书

At 14, Nora Kuzma ran away from home and ended up on the dirty streets of Hollywood. She fell in with a fast crowd, and her dreams of modelling soon landed her a spectacular centrefold in Penthouse Magazine, where at 15 she became internationally known as TRACI LORDS. From there she appeared in numerous adult films and magazines, denying her past and battling a deep addiction to cocaine and men. Three years later she got out. This is her memoir–a tale of loss, redemption, and ultimate survival as Traci Elizabeth Lords takes you into her secretive past, faces her demons, and shares her extraordinary journey of personal growth.

Traci Elizabeth Lords has starred in dozens of films and television shows, including Cry-Baby, Stephen King's The Tommyknockers, Melrose Place, and First Wave. Her groundbreaking album 1,000 Fires was a critical and dance club hit. She lives in Los Angeles with her husband and two cats. This is her first book. --此文字指 paperback 版本。

William E. Selk
5.0 颗星，最多 5 颗星 interesting lady determined to be happy
2022年9月11日 - 已在美国亚马逊上发表
已确认购买
I found the book an easy enjoyable read . I loved reading about her successful experiences throughout her life. Because of her determination to succeed. I glad she’s happy.
阅读更多