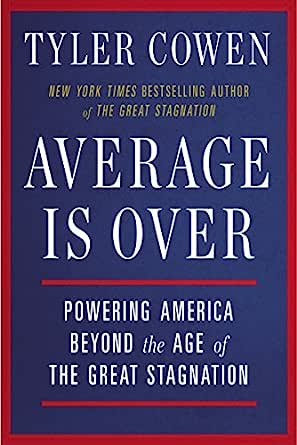 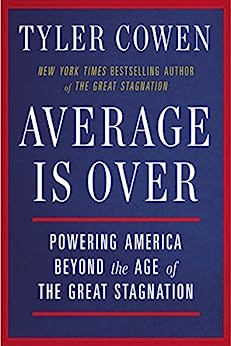 Average Is Over: Powering America Beyond the Age of the Great Stagnation (English Edition) Kindle电子书

Casey Jones
2.0 颗星，最多 5 颗星 Nice ride, destination uncertain
2014年10月16日 - 已在美国亚马逊上发表
已确认购买
Not quite as overblown as Kurzwiel's "singularity" (in short, the notion that, among other improbables, we'll soon have conscious machines, notwithstanding that we don't know what consciousness is) but equally based in part upon an overreach; that "genius machines" (GMs) will arise that will raise the game...

Good analysis of that which I had seen for myself as the problem: Masses of people who were once employed farming and transitioned to bolt-tightening on assembly lines are being moved on to... what, exactly? So far so good; the title is well-supported by the content. But clarifying the problem statement does not solve the problem and that leads to shortcomings on two fronts. On the "below average" side of things, the author does some hand-waving and proclaims optimism with no discernible basis or form. It seems to me that all the routes up from the floor entail traits not in evidence in much of the population (not a pejorative; we cannot all be above average simply because half minus one of us are by definition below average) and although most are above average in something, very few are strong in a cocktail of traits that would likely lead to uplifting, and there is no reason to believe that the fraction so gifted will rise. And no indication whatsoever how those not so gifted will survive, much less thrive. We can take comfort in the reasons for the inherent stability of US governance and society (a strength of the book), but it would appear that said stability may be tested as never before.

The other constant theme is the rise of the GMs. Excellent discussion about how and why the greatest chess is played by man-machine combinations. Loss of the third star because of the unconvincing premise that GMs will be developed that will provide opportunity for high-level main-machine collaboration in a variety of technical, social, and even artistic endeavors. I find this a reach much too far. As intractable as the game of chess once appeared to be, it still has precisely defined boundary conditions: starting point, end points, and rules. No real-world endeavor is so blessed. The author also opens the possibility of "solutions" that are comprehensible only to the GMs. As one who is already skeptical of machine-produced "proofs" of mathematical theorems, I have a serious problem with the concept; I invoke the Emperor's Clothes Principal -- if it's incomprehensible to any human, it's incomprehensible. And bogus.

In sum, decent read, no answers; if you're looking for them, move on -- and let me know if you find any.

Mikio Miyaki
5.0 颗星，最多 5 颗星 danger in front of us
2015年6月26日 - 已在美国亚马逊上发表
已确认购买
Thomas Pikkety claims the gap between the poor and the rich widens further in his best known work of “Capital in the 21st Century.” Tyler Cowen sheds light on this issue from a different angle. In “Average Is Over” he asserts, due to advance of intelligent machines, mid-skilled labor forces are more and more relegated to a lower post and their wages become increasingly cheaper and cheaper. What await them are only gloomy future.

I read this book as a good chance to stir my morale up. Tyler Cowen says the ability to mix technical knowledge with solving real world problem is the key to be the big earners in polarized labor markets. The productive worker and the smart machine become stronger complements than before. Only who can learn to think like smart machines or at least enough to understand their operation will get success. Individuals who work with genius machines will need to retrain and learn new systems constantly.

He depicts shanty world, where the economically left behind people are seeking out cheaper living. They are surprisingly politically conservative and look toward local communities and tight local bonds in order to protect themselves against economic risks. The American future precisely written here would not be what he dreams of. With this prediction he warns us of the danger in front of us. Thinking about the geographic and institutional cluster where commercial talent is on the rise, the cities with high level of education tend to have much lower levels of unemployment. In this sense we are pressed for constant education of ourselves.
阅读更多
6 个人发现此评论有用

Beazle
4.0 颗星，最多 5 颗星 Two Nations and Some Really Good Chess Matches
2013年11月20日 - 已在美国亚马逊上发表
已确认购买
This book, which in many places feels like a blog (sniping at competing writer/economists, etc.), has some interesting parts and some not so interesting unless you like chess, a discussion of which fills a lot of pages spread over several chapters (maybe 100 pages if you include the chapter on Turing, which is interesting but not all that connected to the main theme of the book). The point of all this chess talk is to use recent changes in chess competition to illustrate how similar changes will (are) affecting society, culture and the economy at large. Man vs. man -> man vs. machine -> man+machine vs. man+ machine. So it is (will be) in many endeavors including work, education, science and even economics, at least according to Cowen. But you don't have to read 100 pages of chess talk to get the point. Better to focus your attention on the best chapters 1, 2, 3, 9 and 12. One through three look at the weak job market discussing it as much if not more from a cultural than an economic perspective (there are some charts but the heart of the analysis is that in a man+ machine world "conscientiousness" is what differentiates the job winners (high paying work)from the job losers (low paying work). Chapter 9 is a conceptually innovative look at offshoring (not nearly as big a problem as is often supposed according to Cowen) and immigration (which he sees as the "on-shoring" of jobs that would otherwise be offshored). Well worth reading. And Chapter 12 is worth the price of the book (as some other reviewer has already said). It takes a decidedly non-dystopian view of America over the next 20-30 years that sees us drifting toward what we might call the "Texas model": low taxes, lots of low-wage, "brute force" jobs, high crime, poor health care, sub-par schooling, no zoning, all culminating in cheap living for the 85% of Americans who are the "losers" in our rapidly bifurcating society. (The "winners" are in Austin presumably getting rich by working under the direction of "genius machine" computers.) Cowen sees Central-American-style "favelas" (400 sq ft homes with below average public services) spreading throughout America. The rest of us will live in concentrated gatherings of education, innovation and wealth, mostly urban. He sees Americans in both the winner and loser categories accepting of this tectonic cultural and economic shift because, despite all else, "hardly anyone need feel bad about being an American." America (or perhaps North America to include Canada and parts of Mexico, will continue to dominate the 21st century just as we have the second half of the 20th. Indeed, America will continue to be "one of the nicest places in the world." His point is that while the split is inevitable (at least insofar as current trends seem to predict) the outcomes are non-threatening, nothing to worry too much about. It will be an "oddly peaceful time." More wealthy people with much better health care, more poor people living on canned beans and lots of "cheap fun," not much in between, "two nations, a fantastically successful nation, working in the technologically dynamic sector, and everyone else." Average is over. Cowen's argument is persuasive.
阅读更多
7 个人发现此评论有用
加入亚马逊Prime，从此免运费
亚马逊Prime会员可享海外购美/英/日/德跨境免邮，全年无限次！更有免费无限次阅读电子书服务
> 立即加入
了解我们
合作信息
帮助中心和购物指南