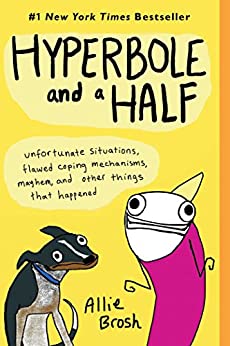 Hyperbole and a Half: Unfortunate Situations, Flawed Coping Mechanisms, Mayhem, and Other Things That Happened (English Edition) Kindle电子书

"I must have interrupted Melinda a dozen times to read to her passages that made me laugh out loud. . . . The adventures she recounts are mostly inside her head, where we hear and see the kind of inner thoughts most of us are too timid to let out in public. Despite her book’s title, Brosh’s stories feel incredibly—and sometimes brutally—real. . . . It is no hyperbole to say I love her approach—looking, listening, and describing with the observational skills of a scientist, the creativity of an artist, and the wit of a comedian." (Bill Gates)

“I would gladly pay to sit in a room full of people reading this book, merely to share the laughter.” (Philadelphia Inquirer)

"My wife, who rarely reads a book published after 1910 and who is difficult to make laugh, wept with pleasure while reading these comic illustrated essays from Ms. Brosh, who runs a popular web comic and blog. I had to find out what the fuss was about. The subjects run from light (cakes, dogs) to dark (the author’s own severe depression), and they foreground offbeat feeling and real intellect. Ms. Brosh’s inquisitive mind won me over, too.” (Dwight Garner New York Times)

“In a culture that encourages people to carry mental illness as a secret burden . . . Brosh's bracing honesty is a gift.” (Chicago Tribune)

“Brosh captures humanity at its simultaneous worst and best with a razor wit that allows us to laugh at even our darkest of selves.” (The Advocate (Baton Rouge))

"Will make you laugh until you sob, even when Brosh describes her struggle with depression." (Entertainment Weekly)

"This is the BOOK OF THE YEAR." (Elizabeth Gilbert)

“One of the best things I’ve ever read in my life.” (Marc Maron) --此文字指其他 kindle_edition 版本。

Allie Brosh is the author of the #1 New York Times bestseller Hyperbole and a Half, which was named the Goodreads Choice Award Winner for Best Humor Book of the Year. Brosh has also given herself many prestigious awards, including “fanciest horse drawing” and “most likely to succeed.” HyperboleandaHalf.blogspot.com --此文字指其他 kindle_edition 版本。