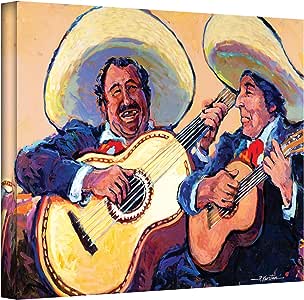 Art Wall, Rick Kersten 'Mariachi de Cabo' Gallery Wrapped Canvas is a high-quality canvas print depicting mariachi music in Cabo San Lucas. A cultural and uplifting addition to your home or office. RICK KERSTEN's life and his art have been interwoven since he was a child growing up in Arizona. "It was clear to me, at a very young age, what I wanted to do. I just wanted to create things, whether it was paintings, sculpture, book illustration, greeting card art, murals, cartoon strips, designing stores and restaurants or decorating bulletin boards for my daughter-in-law/teacher. I truly love what I do. "Rick obtained his art training through a variety of life experiences. During his formal training at Arizona State University, he worked in many advertising agencies in the Phoenix area and also free-lanced as an artist for the popular television show "Wallace and Limo." In his senior year at the university, Rick was commissioned by Del Webb Corp. to create paintings for their hotels and restaurants. After ASU, Rick found himself in the Navy during the Vietnam War, where he did many paintings and illustrations of life in Vietnam, the Philippines, Hong Kong, Taiwan and of these illustrations were published in the Navy Times newspaper. While in the Philippines, he completed a mural for the main administration building on the Subic Bay Naval base. Up on returning to Arizona, Rick and his brother Pete, formed Kersten Brothers Studios, a design studio that specialized in product designs for the retail market. This eventually grew into Kersten Brothers Greeting Cards, production, sales and distribution company with more than 9,000 accounts in the United States and 14 foreign countries. In 1985, the publishing and distribution part of the business was sold. Rick is still involved in licensing Kersten Brother's artwork, but his primary focus is now doing what he loves most, painting the southwest.