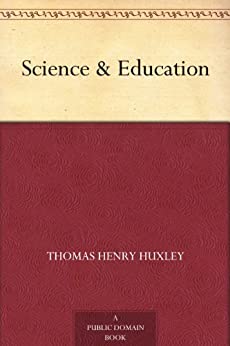 英语版本 Thomas Henry Huxley (作者) 格式: Kindle电子书
|
分享
分享 <分享样章>
| #1 亚马逊最畅销商品 在Engineering & Technology（工程与技术）中
广告
显示所有 格式和版本 隐藏其他格式和版本
This book was converted from its physical edition to the digital format by a community of volunteers. You may find it for free on the web. Purchase of the Kindle edition includes wireless delivery.
阅读更多
Previous page
Next page
›  查看更多商品促销信息

Gary Upshaw
4.0 颗星，最多 5 颗星 Importance of Education Then, You Compare to Today
2020年6月6日 - 已在美国亚马逊上发表
已确认购买
Thomas Henry Huxley (1825 – 1895) was an English biologist and anthropologist specializing in comparative anatomy. He is known as "Darwin's Bulldog" for his advocacy of Charles Darwin's theory of evolution. This book is a collection of his essays published in 1893. Huxley was an ardent advocate for education to advance the quality of life and opportunity, not only of men but also women and blacks. An interesting read gives a flavor of the times, and a context to compare our current time of education emphasis.

Although Huxley had a very difficult childhood, his Calvinist upbringing and single mindedness to excel brought him to prominence in British scientific advances. He was forced to leave school at age of 10 but had the determination of self-education, he taught himself German, Latin and Greek, and worked with Charles Darwin translating German publications.

Some of the essays display what would be termed political incorrect today, however, his intent was sound. It is lamentable that we have lost those qualities in our society that could solve many of our social ills, and unfortunately those who advance those fine qualities of perseverance, determination and hard work are denigrated to the detriment of society.

r0wdyr0bby
3.0 颗星，最多 5 颗星 summed up
2014年1月18日 - 已在美国亚马逊上发表
已确认购买
More of a summed up version. Guess cant complain much for free, but still these summed versions are getting annoying
阅读更多