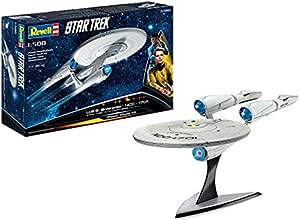 USS Enterprise from the movie Into Darkness

not appropriate for children under the age of 10 years

not appropriate for children under the age of 10 years

Dorkspawn
3.0 颗星，最多 5 颗星 Life is like a box of chocolates. You never know what you're going to get.
2017年6月10日 - 已在美国亚马逊上发表
样式: Into Darkness已确认购买
Apparently, buying this kit is a total crap shoot. The kit comes with 2 bags of clear parts. The first kit I ordered had the same 2 bags. There are no options to get additional parts from Revell of Germany for this kit. Also, the upper saucer wanted to collapse in on itself. I could pop it back up, but as soon as I touched it again it would pop back down. The neck sections were bowed outward and I don't think any amount of clamping or gluing would have held them together. I ordered a second kit and decided to keep the first one for spare parts. The second kit was perfect. All the parts that were supposed to be in the box were there and they all fit together nicely. Almost like a completely different model, or at least manufacturer. As some have mentioned, the decals were an exercise in frustration though. I ended up painting on a lot of the markings. I used aztec masks from Orbital Drydocks and the lighting kit from Evans Lighting.

The end result was well worth it, but I and lots of others have had major problems with this kit.

Michael Phalin
4.0 颗星，最多 5 颗星 Great Model, Worthless Decals
2019年4月24日 - 已在美国亚马逊上发表
样式: Into Darkness已确认购买
Over the past year I've been assembling Enterprise models from AMT, Polar Lights, and Revell. Sadly, this version of the Enterprise was not available in the States by the typical manufacturers, so we had to import it. With limited experience with Revell models, I wasn't sure if it would suffer from the same problems found in the AMT kits such as: thin plastic, poor fittings, low levels of detail. Revell exceeded AMT, but came short of Polar Lights. PL models usually fit togther very well, and most seams are well hidden without the use of putty. This Revell model does a good job, though. The saucer isn't split up into several parts, rather two discs, the bridge and the impulse engines. You don't have to worry about the rim being divided into multiple panels, like on other models.

With Enterprise models, the biggest concern comes down to the nacelles and their supporting arms. The older AMT models always got these wrong. I'd always have to load the nacelles with putty and take hours out of the build time to make sure they were balanced properly. This Revell kit does it right. The secondary hull comes with half of the arms molded on, you just have to attached the top half. Then the nacelles lock into place via slotted openings. This adds more surface area to place cement and gives little wiggle room, allowing the nacelles to sit properly.

The Nacelles assemblies themselves were the only real issue I found with the construction aspect of the kit. They're split vertically down the middle, making the seam line very visible without a large amount of putty and sanding. You will have to spend a bit of time reshaping the back half of the nacelles so the "lights" or bumps don't look uneven. The bassard collectors lack a lot of details under the clear sections. Oddly, Revell wants you to put a large circular decale behind the clear plastic of the collector, but the instructions tell you that the decal has to lay part on the plastic, and the rest has to dangle over the edge. In this case, I'd say just spend the thirty/forty bucks and get the metal parts to create the turbines rather than using the decal. Moebius got this right with their U.S.S. Franklin kit by making the turbines three separate layered pieces.

Speaking of decals, this was the only true negative. A few bad parts of a model can be fixed with a little time, but decals aren't as easily repaired. Maybe it is because the kit is about six years old, but a majority of the decals refused to set. The large text decals stayed in place, but many of the stripes, circles, dots, and squares would either fall off on their own a day after being set, or would lift with the slightest touch. It got to the point where I started painting on the grey squares, but some of the others are harder to replicate with the level of detail needed. As I've not built a kit from this company before, I don't know if this flaw is due to age, quality, or something else.

Overall, the kit is worth $50-$60. Invest in some micro-set if you plan on using the included decals.

Willco2016
5.0 颗星，最多 5 颗星 Still "Trekin" in the 21st Century!
2016年7月19日 - 已在美国亚马逊上发表
样式: Into Darkness已确认购买
Finally, this kit has become more available in the states. Still a bit pricey but with the approx 12" diameter saucer section, she lends herself
well to internal lighting. There are some custom lighting kits on the market I will have to check out. Overall quality is very good. This version has "Into Darkness" marked on the box. I don't know if its any different than the first version of this kit which came out in possibly 2011? Anyway I love this kit and would recommend.
Thanks
阅读更多
5 个人发现此评论有用

Lexi Greywinds
2.0 颗星，最多 5 颗星 Bit disapointed.
2018年3月23日 - 已在美国亚马逊上发表
样式: Into Darkness已确认购买
The main hull was warped to the point where it could not be built. Didn't notice it until I had already done some paintwork on the saucer section. It looks like it would have been a super awesome model, the scale of it surprised me. It's huge! Just sad it cost so much and not able to be built.
阅读更多
3 个人发现此评论有用

Jack Smith
5.0 颗星，最多 5 颗星 Great model kit, one small issue.
2017年4月5日 - 已在美国亚马逊上发表
样式: Into Darkness已确认购买
I love the size and detail. The saucer section on mine was short-shot (the plastic didn't fill the entire mold and left an opening in a bad spot) and Revell-Germany has failed to return my inquiries, but the model overall is fantastic. It's very large, and would be easy to add lights to using either pre-made kits or just by yourself!
阅读更多
1 个人发现此评论有用
加入亚马逊Prime，从此免运费
亚马逊Prime会员可享海外购美/英/日/德跨境免邮，全年无限次！更有免费无限次阅读电子书服务
> 立即加入
了解我们
合作信息
帮助中心和购物指南