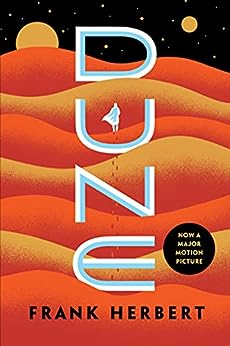 Frank Herbert’s classic masterpiece—a triumph of the imagination and one of the bestselling science fiction novels of all time.

Set on the desert planet Arrakis, Dune is the story of the boy Paul Atreides, heir to a noble family tasked with ruling an inhospitable world where the only thing of value is the “spice” melange, a drug capable of extending life and enhancing consciousness. Coveted across the known universe, melange is a prize worth killing for....

When House Atreides is betrayed, the destruction of Paul’s family will set the boy on a journey toward a destiny greater than he could ever have imagined. And as he evolves into the mysterious man known as Muad’Dib, he will bring to fruition humankind’s most ancient and unattainable dream.

“I know nothing comparable to it except
The Lord of the Rings.”—Arthur C. Clarke

“It is possible that Dune is even more relevant now than when it was first published.”—The New Yorker

“One of the monuments of modern science fiction.”—Chicago Tribune

“Powerful, convincing, and most ingenious.”—Robert A. Heinlein

“Herbert’s creation of this universe, with its intricate development and analysis of ecology, religion, politics and philosophy, remains one of the supreme and seminal achievements in science fiction.”—Louisville Times --此文字指其他 kindle_edition 版本。

Frank Herbert was a reporter and editor of a number of West Coast papers before becoming a full time writer in the 50's. He died in 1986. --此文字指其他 kindle_edition 版本。

Appendix I: The Ecology of Dune

Appendix II: The Religion of Dune

Appendix IV: The Almanaken-Ashraf
(Selected Excerpts of the Noble Houses)

Terminology of the Imperium

A beginning is the time for taking the most delicate care that the balances are correct. This every sister of the Bene Gesserit knows. To begin your study of the life of Muad'Dib, then, take care that you first place him in his time: born in the 57th year of the Padishah Emperor, Shaddam IV. And take the most special care that you locate Muad'Dib in his place: the planet Arrakis. Do not be deceived by the fact that he was born on Caladan and lived his first fifteen years there. Arrakis, the planet known as Dune, is forever his place.

—from "Manual of Muad'Dib"
by the Princess Irulan

In the week before their departure to Arrakis, when all the final scurrying about had reached a nearly unbearable frenzy, an old crone came to visit the mother of the boy, Paul.

It was a warm night at Castle Caladan, and the ancient pile of stone that had served the Atreides family as home for twenty-six generations bore that cooled-sweat feeling it acquired before a change in the weather.

The old woman was let in by the side door down the vaulted passage by Paul's room and she was allowed a moment to peer in at him where he lay in his bed.

By the half-light of a suspensor lamp, dimmed and hanging near the floor, the awakened boy could see a bulky female shape at his door, standing one step ahead of his mother. The old woman was a witch shadow—hair like matted spiderwebs, hooded 'round darkness of features, eyes like glittering jewels.

"Is he not small forhis age, Jessica?" the old woman asked. Her voice wheezed and twanged like an untuned baliset.

Paul's mother answered in her soft contralto: "The Atreides are known to start late getting their growth, Your Reverence."

"He's awake and listening to us," said the old woman. "Sly little rascal." She chuckled. "But royalty has need of slyness. And if he's really the Kwisatz Haderach ... well...."

Within the shadows of his bed, Paul held his eyes open to mere slits. Two bird-bright ovals—the eyes of the old woman—seemed to expand and glow as they stared into his.

And she was gone, pushing his mother out, closing the door with a solid thump.

In all the upset during this time of change, the old woman was the strangest thing he had seen.

And the way she called his mother Jessica like a common serving wench instead of what she was—a Bene Gesserit Lady, a duke's concubine and mother of the ducal heir.

Is a gom jabbar something of Arrakis I must know before we go there? he wondered.

There had been so many things to learn. Arrakis would be a place so different from Caladan that Paul's mind whirled with the new knowledge. Arrakis—Dune—Desert Planet.

Thufir Hawat, his father's Master of Assassins, had explained it: their mortal enemies, the Harkonnens, had been on Arrakis eighty years, holding the planet in quasi-fief under a CHOAM Company contract to mine the geriatric spice, melange. Now the Harkonnens were leaving to be replaced by the House of Atreides in fief-complete—an apparent victory for the Duke Leto. Yet, Hawat had said, this appearance contained the deadliest peril, for the Duke Leto was popular among the Great Houses of the Landsraad.

"A popular man arouses the jealousy of the powerful," Hawat had said.

Paul fell asleep to dream of an Arrakeen cavern, silent people all around him moving in the dim light of glowglobes. It was solemn there and like a cathedral as he listened to a faint sound—the drip-drip-drip of water. Even while he remained in the dream, Paul knew he would remember it upon awakening. He always remembered the dreams that were predictions.

Paul awoke to feel himself in the warmth of his bed—thinking ... thinking. This world of Castle Caladan, without play or companions his own age, perhaps did not deserve sadness in farewell. Dr. Yueh, his teacher, had hinted that the faufreluches class system was not rigidly guarded on Arrakis. The planet sheltered people who lived at the desert edge without caid or bashar to command them: will-o'-the-sand people called Fremen, marked down on no census of the Imperial Regate.

Paul sensed his own tensions, decided to practice one of the mind-body lessons his mother had taught him. Three quick breaths triggered the responses: he fell into the floating awareness ... focusing the consciousness ... aortal dilation ... avoiding the unfocused mechanism of consciousness ... to be conscious by choice ... blood enriched and swift-flooding the overload regions ... one does not obtain food-safety-freedom by instinct alone ... animal consciousness does not extend beyond the given moment nor into the idea that its victims may become extinct ... the animal destroys and does not produce ... animal pleasures remain close to sensation levels and avoid the perceptual ... the human requires a background grid through which to see his universe ... focused consciousness by choice, this forms your grid ... bodily integrity follows nerve-blood flow according to the deepest awareness of cell needs ... all things/cells/beings are impermanent ... strive for flow-permanence within....

When dawn touched Paul's window sill with yellow light, he sensed it through closed eyelids, opened them, hearing then the renewed bustle and hurry in the castle, seeing the familiar patterned beams of his bedroom ceiling.

The hall door opened and his mother peered in, hair like shaded bronze held with black ribbon at the crown, her oval face emotionless and green eyes staring solemnly.

He studied the tallness of her, saw the hint of tension in her shoulders as she chose clothing for him from the closet racks. Another might have missed the tension, but she had trained him in the Bene Gesserit Way—in the minutiae of observation. She turned, holding a semiformal jacket for him. It carried the red Atreides hawk crest above the breast pocket.

"Hurry and dress," she said. "Reverend Mother is waiting."

"She was my teacher at the Bene Gesserit school. Now, she's the Emperor's Truthsayer. And Paul...." She hesitated. "You must tell her about your dreams."

"I will. Is she the reason we got Arrakis?"

"We did not get Arrakis." Jessica flicked dust from a pair of trousers, hung them with the jacket on the dressing stand beside his bed. "Don't keep Reverend Mother waiting."

Paul sat up, hugged his knees. "What's a gom jabbar?"

Again, the training she had given him exposed her almost invisible hesitation, a nervous betrayal he felt as fear.

Jessica crossed to the window, flung wide the draperies, stared across the river orchards toward Mount Syubi. "You'll learn about ... the gom jabbar soon enough," she said.

He heard the fear in her voice and wondered at it.