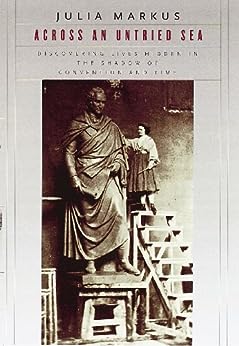 Across an Untried Sea: Discovering Lives Hidden in the Shadow of Convention and Time (English Edition) Kindle电子书

Julia Markus received her B.A. and M.A. degrees in comparative literature from Boston University, and her Ph.D. in Victorian literature from the University of Maryland. She is a professor of English and Director of Creative Writing at Hofstra University, and is the author of five novels and a biography of the Brownings' marriage, Dared and Done, as well as the editor of two volumes of Elizabeth Barrett Browning's poetry. She is a recipient of both a National Endowment for the Arts and a National Endowment for the Humanities grant. She researched part of Across an Untried Sea while a fellow at Hawthornden Castle, outside Edinburgh. She lives in Connecticut and New York. --此文字指 hardcover 版本。

Something new under the Roman sun: a household of unmarried women. Independent women they were called in 1852. The famous American actress Charlotte Cushman, always paterfamilias, leased the house on the Corso and filled it with her friends. The actress was thirty-six years old at the time. Having raised herself and her family from poverty to riches, Charlotte was retiring from the stage. She came to the Eternal City with her companion, Matilda M. Hays, British translator of George Sand. Matilda was a few years younger and more feminine in appearance than Charlotte, though they both dressed like men from the waist up, wearing tight, lapeled bodices, handsome waistcoats, and elegant bow ties.
A third person in this party of 'jolly bachelors,' as they called themselves, was a young woman of twenty-two, short, chubby, and daring, who soon dressed like a man from the waist down as well as up. She rode her horse, 'scrambling about,' going anywhere in Rome and its countryside that she desired--alone.

Harriet Hosmer was her name; 'Hattie' she was called. Hattie's hair was cropped, and when she joked around or talked seriously about the art of sculpture, she pushed her fingers through it like a boy. The popular British actress Fanny Kemble, who knew Hattie since she was a child, worried that Hattie's 'peculiarities,' as she phrased it, might be held against her genius. But not in Rome. Or in Florence, where residents such as the Brownings fell in love with that fun-loving, free-spirited American. Elizabeth Barrett Browning, who found Hattie strange at first, soon found her pure, pure, pure.

Three other independent women joined them on the Corso, justifying Charlotte's friends' joking remark that the actress was never seen with less than six people in tow.

Charlotte took care of the household expenses, her fortune recently increased by a long and profitable 'farewell tour' in America. She had been absent from her homeland for five years, during which time her spectacular success on the British stage turned her into a legend. Cushmania marked her return. In New York and Philadelphia the actress had trouble wending her way into her dressing room through the crowds that lined the streets to greet her, to touch her. She was escorted through the throng by Sallie Mercer. Sallie, part of the Cushman mystique, was with her in Rome. She was Charlotte's prompter, her skilled dresser, her housekeeper--her 'right hand' Charlotte called her.

Charlotte had hired the bright, outspoken, literate Sallie in Philadelphia when Sallie was only fourteen and Charlotte at twenty-eight was about to try her luck abroad for the first time. Charlotte always had an instinct for the right people. She saw Sallie's intelligence and determination in the high cast of her forehead, in the brown sheen of her skin.

'Sallie,' she'd write, and then list a complicated set of instructions for
the girl--people's houses to go to, what to say, messages to deliver and return--signed 'Charlotte.' Though Sallie's mother objected, Sallie was eager to accompany Charlotte to London--and since then hardly ever left her side.

In Rome, the slim, strong-minded Sallie Mercer did not dress like a man from the waist up. But being a Negress, not a slave in bondage, but a free American Negress, had its own exotic appeal among the expatriates, and among the Romans who were known even then for their live-and-let-live enjoyment of novelty, their finely honed sense of irony, and their ability unabashedly to stare.

William Wetmore Story, the aspiring sculptor who was at the head of the English and American expatriate community in Rome, entered the household of emancipated women, as they were slyly called. He arrived to pay his respects to the only male among them, Hattie Hosmer's father, whom he knew from Boston days.

William Wetmore, a lawyer who wrote a definitive work on Contracts, was supposed to return to New England after sculpting a memorial statue of his father, the deceased Supreme Court judge, Justice Joseph Story. But he was actually in the process of giving up law--and Boston--and devoting his life--and his inheritance--to sculpture and poetry--from the vantage point of the piano nobile of the Palazzo Barberini. Already he was the poet Robert Browning's best friend.

Hattie called out to her father, 'You have a visitor.'

Dr. Hosmer entered rather meekly. Being there in Rome among these jolly bachelors was not his idea.

A year and a half before, Hattie insisted on going from Watertown, Massachusetts, into Boston to see Charlotte Cushman play Hamlet and it changed her life.

Hattie was overwhelmed by Cushman's portrayal of the Danish prince, and with her usual aplomb, went backstage--where Charlotte immedi-
ately took to her. Hattie told her straight out that she planned to be a sculptor. No matter that there were no professional women sculptors at the time. It was even a peculiar choice for an American man. Most Americans believed all those naked statues were better left to the ancients and the Europeans.

Harvard did not admit women and Dr. Hosmer could not persuade the medical school to allow his daughter to study anatomy there. So Hattie traveled to St. Louis, Missouri, where she was able to study anatomy and lived with the family of her best friend Cornelia Crow--Cornie. Even the way she traveled was brimmed with fun. Leaving St. Louis with her certificate of proficiency in anatomy in hand, she smoked a peace pipe with a Dakota chief in Lansing. She beat the boys in a race up an unnamed bluff four hundred feet above the Mississippi. It became--and remains--Mount Hosmer.

Hattie's youthful determination reminded Charlotte of her own.

If Hattie wanted to be a sculptor, she had to go to Rome. It was the center of the art world, according to the best tables in Boston. Charlotte had never been there, but she and Matilda Hays might be going next autumn. Would Hattie join them?

She might be going to Rome! Hattie wrote to her friend Cornie in St. Louis, 'Isn't it strange how we meet people in this world and become attached to them in so short a time?'

Months later, Charlotte went to Watertown to persuade Dr. Hosmer to allow his daughter to travel, but Charlotte did not win him over. Only when word came from St. Louis that the wealthy businessman Wayman Crow, Cornie's father, would sponsor Hattie did the doctor agree--reluctantly.
Charlotte thought Dr. Hosmer cheap, could not imagine a father not giving his daughter what she wanted when he had the wherewithal. Look at all she did for her family, her belongings she called them. Born and bred in Boston, she left school at the age of thirteen to help her mother run a boardinghouse outside of Boston, after her elderly father went bankrupt in West Indian trade. Elkanah Cushman, who began his working life as a hairdresser, hadn't even the business sense to put paper between him and his partner. Young Charlotte, the oldest child, dreamed of saving her family. There were the music lessons she paid for by becoming an indentured servant. She whose family boasted Mayflower roots. Then the successful debut in Boston on the opera stage, followed by the disaster in New Orleans where her voice deserted her and the critics on the Bee and the Pecayune panned her. She did not give in, she turned to acting, tutored by one in the company.


By the age of nineteen, with only a few months of professional training which aimed at getting below the surface of her Unitarian-girl reserve, Charlotte found her calling and made her acclaimed debut as Lady Macbeth. Her Lady Macbeth was a young, ambitious, energetic unsexed force, possessed with one mad desire, ready to peril all that was high and holy to attain her ends. The same newspapers that had humiliated her now extolled her. And every adversity since then, every attempt of her enemies to thwart her, she turned from defeat to advantage through talent and brute determination. Never for herself, she made sure everyone knew. All she did, all she had ever done, was done to support her belongings, her mother and her younger siblings. For them she had become an actress. It made her almost respectable.

Dr. Hosmer, with only one belonging spared him by God--his wife and other children all died of tuberculosis--held his purse shut, until wealthy Wayman Crow opened his. That was how Charlotte saw it, but the doctor was fearful as well as parsimonious. He had raised his daughter to a rigorous outdoor life to save her from the dreaded illness. He gave her a spirited horse, a dog, a gun. A boathouse. Their Watertown home had gardens that reached down to the Charles River. Young Hattie rowed and swam in the summer, ice-skated in the winter. Unheard-of activities for girls. Of course she adapted to the boy's regime of exercise and hard play like a duck to water. Hattie was a handful with her wild pranks and her wit and her 'peculiarities.'

As a child she was unruly at school, coming home with notes of reprimand pinned to her back. She ran off to Boston at night; once she uncoupled a railroad car hoping the engine would go on its merry way, leaving all the passengers behind. Her father had to pay for that one.
The frugal doctor warned beneficent Wayman Crow that reckless spending was Hattie's incurable disease. Open a purse and she emptied it.

Because of her wild streak, Dr. Hosmer was almost forced to send his daughter to Mrs. Charles Sedgwick's home school for girls in Lenox, Massachusetts. Mrs. Sedgwick was known for her way with difficult cases. Hattie soon became the wittiest girl, the life of the party. Away from her father, she had the most wonderful time. And she met Cornie Crow, who
became her roommate there.

'Come, Hattie, do give us some fun tonight!' Cornie remembered the actress Fanny Kemble saying.

Mrs. Kemble kept a cottage in Lenox and would read Shakespeare to the girls when she was in town. On Saturdays the girls were invited to her 'Perch,' where they would play charades or put on amateur theatrical... --此文字指 hardcover 版本。