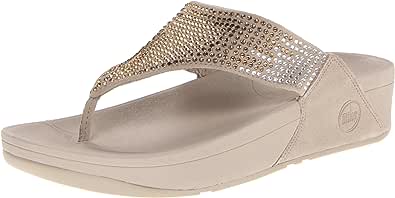 ponzu
1.0 颗星，最多 5 颗星 Broke After Barely Any Wear
2017年2月17日 - 已在美国亚马逊上发表
已确认购买
I'm a big fan of FitFlop. I bought my first pair right after having my second child more than seven years ago. In fact, I bought this exact same model. And it lasted me for seven years. Technically they're still not broken and can still be used, it's just that they're very worn out after seven long years of wearing them constantly. So a few months ago I decided to buy myself a new pair. Since then the weather has turned cold and we've had a lot of rain so I haven't worn them very much. But I was just wearing them today and the strap already broke! See pictures. This is just from walking up the street to pick up my kids from school. I love the shoes, but they are expensive and I expect them to last a long time. And I don't see any options on the site to have the ability to try to exchange them for a new pair.

UPDATE: They replaced the one that broke right away in February. I have been happily wearing them ever cents. But it's now August, only six months later, and one of the issues is looking like it's going to break again in the same place (between the toes) any day now. As a reminder, the first time I ever bought this shoe, it lasted me more than seven years. In fact I still have that old pair, they never broke, I just decided to get a new pair because they were starting to look really worn out after seven years. I don't know what they're doing differently in making these shoes, but they appear to be made in a very cheap way that causes them to break easily. It's very unfortunate and disappointing, because this was my go-to shoe for comfort and walking. Now I will need to look for a different kind of shoe, probably still a FitFlop, but one without the tong feature.

Cynthia A. Ritter
5.0 颗星，最多 5 颗星 Buy these Shoes ASAP!
2016年5月8日 - 已在美国亚马逊上发表
已确认购买
Great fit & extremely comfortable! I need another pair in a different color, and another & another!
阅读更多

Nana
2.0 颗星，最多 5 颗星 Newer Fitflops Fall Short of Original
2017年1月10日 - 已在美国亚马逊上发表
已确认购买
Afraid I'm going to have to return the Flare (I tried and returned the Lulu a while ago). Am on my 3rd pair of Fitflop Walkstars (original version), which, like me, are not getting any younger. I don't want to contemplate life w/o my Walkstars, the most comfortable footwear I have ever owned (a reason to get out of bed in the morning), but I don't know where to turn when the thong rips out, as sooner or later, it must.
I can't find Walkstars in stock anywhere, and neither the Flare nor the Lulu feels anything like. I fear that their hard insoles and shorter footbeds
(the Flare is inches shorter than my Walkstars, measured sole to sole) are par for the course of the newer styles, which not only fail to provide the comfort of the Walkstar, but which are even a little less comfortable than most shoes. Anyway, I'm getting desperate. Can anyone at the company advise concerning the changes? Are there any plans to reintroduce the original Fitflop?
阅读更多
9 个人发现此评论有用

Arianna
1.0 颗星，最多 5 颗星 Great shoes if you can find a pair that fits.
2019年3月29日 - 已在美国亚马逊上发表
已确认购买
After years of wearing fitflops and loving every moment of it I'm now having problems finding the correct fit. I wear a size 10 shoe with a normal width. But in FitFlops I buy 9. That's not working anymore. This pair is too small, they're not long enough. There is no consistency in sizing. Trying to find the correct size in FitFlops, the only shoe I can comfortably wear is now a daunting challenge, to say the least.
阅读更多
5 个人发现此评论有用