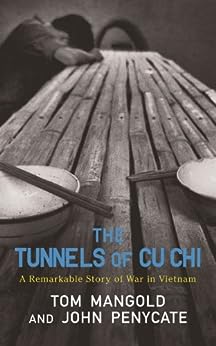 The Tunnels of Cu Chi: A Remarkable Story of War (English Edition) Kindle电子书

“A claustrophobic but fascinating tale.”
–The Wall Street Journal

“Chilling . . . what war really was and how it was fought.”
–The New York Times

Tom Mangold has been an investigative reporter with BBC TV and a reporter for the Sunday Mirror and the Daily Express. As a war correspondent, he covered Vietnam, two Middle East wars, and the Russian invasion of Afghanistan. His first book, The File on the Tsar, was an international bestseller.

John Penycate is a journalist who has reported regularly for BBC TV’s weekly public affairs shows The Money Programme and Panorama and has interviewed major political and business leaders. He lectures at the journalism schools of London and Westminster universities. A resident of London, Penycate is active in institutes and societies concerned with the media and public affairs. --此文字指其他 kindle_edition 版本。

Ed Rouse
5.0 颗星，最多 5 颗星 Very informative
2019年5月11日 - 已在美国亚马逊上发表
已确认购买
If you are a war history buff, you will find this a fascinating read. Although it is billed as being about the American forces tunnel rats it is also a historical account of the VC themselves. It shows what war does to persons and to what length and sacrifice they will go to, to move forward and to survive. I was amazed to what lengths both parties went to in order to complete their mission. The Viet Cong were not just backwards 3rd country people. You will see that they were very smart, very cunning and in many cases much more resilient than the occupying American forces. I came away knowing why we could not come to a victory in this war. We were looking for a conventional war and we were put into a very unconventional war. The tunnel rats themselves were a rare breed of soldiers. I could not imagine going through what they went through trying to accomplish their mission. A very good read.
阅读更多
6 个人发现此评论有用

Bob Calverley
4.0 颗星，最多 5 颗星 Important Perspective from the Vietcong Side
2018年8月22日 - 已在美国亚马逊上发表
已确认购买
This is one of the best books on the Vietnam War, mainly because it includes a great deal of insightful perspective from the the other side - namely the Vietcong. It also highlights American tactical failures absent from most American histories. For example, placing the 25th Infantry Division main base of operations virtually on top of the enemy's biggest tunnel complex and never recognizing that fact. At times the narrative becomes plodding and I'll ding it a star for that, but I'd only take half that star away if I could.
阅读更多
3 个人发现此评论有用
加入亚马逊Prime，从此免运费
亚马逊Prime会员可享海外购美/英/日/德跨境免邮，全年无限次！更有免费无限次阅读电子书服务
> 立即加入
了解我们
合作信息
帮助中心和购物指南