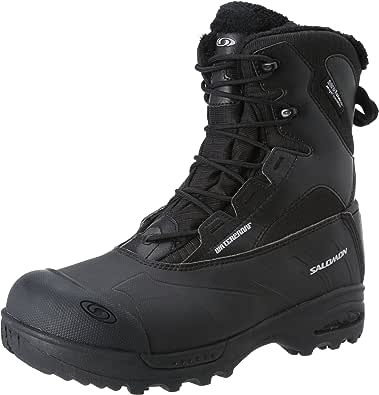 Robert McGill
2.0 颗星，最多 5 颗星 Comfortable boot but don't step in a river
2015年12月11日 - 已在美国亚马逊上发表
已确认购买
These Salomons are very light, with a wide toe box and a fitted heel cup. I had no heel lift when walking. My 9 1/2 feet fit very well in a 10. I touched the end slightly in the 9 1/2. They have a very thick insole (5/16") which should make them warmer. They have a great tread and are completely waterproof up to 3.25 inches. If the water gets higher than that, its a different story (see below). I was all set to pick these boots until I did a water soak test.

Ice Water Soak: I did an extended test of this boot (Salomon Men's Toundra Mid WP Snow Boot) vs the Columbia Men's Bugaboot XTM Snow Boot,Black/Charcoal,10 M US by immersing one boot each for two hours in 5 inches of 40 degree water with a temperature sensor outside my sock and just under my toes. Admittedly, not a relevant test for a winter boot, but the hope was to see which kept my toes the warmest. As it turns out, the toes of both boots were cool (in the low 50's) after two hours (the Columbia about 2 degrees warmer than the Toundra), but what I discovered about the Toundra caused me to rethink the concept of "waterproof".

What exactly do they mean by "Waterproof"? The Columbia leaked a small amount of water and wet the toe of my sock which probably caused the cool toes. That was a bummer. My foot came out of the Toundra dry as a bone, but when I turned the Toundra over after the soak, water poured out of the OUTER SEAMS of the boot. About a half a pint of ice cold water had thoroughly soaked into the insulation. I squeezed the boot out like a sponge. That explains why my foot felt colder in the Toundra than the Columbia even though it wasn't getting my sock wet. Although the Columbia leaked slightly, the insulation was dry and the soaked boot weighed essentially the same as the dry boot. That suggests that the Columbia did not absorb any water into the insulation during the two hour soak. Pretty amazing.

So, my advice is not to tramp around in any streams on the way to your campsite!

BTW - the dry Toundra weighs in at 1 lb 7 oz. and the Columbia boot (wet or dry) weighs 1 lb 11 oz, about 4 oz heavier. After the soaking, the Toundra had gained 7 oz and weighed 1 lb 14 oz. The Columbia boot did not gain any weight during the soaking.

mjamazon
4.0 颗星，最多 5 颗星 Comfortable, sized very small
2016年2月9日 - 已在美国亚马逊上发表
已确认购买
I would usually wait until wearing these more before reviewing, but I wanted to mention the sizing since others seemed to have some problems as well.

The size 10 Salomon Toundra was so small I had trouble even putting it on. I immediately knew it wouldn't work. I liked everything about the boot so I gave it another try in size 11. The 11 fits perfect with a comfortable width and length. I plan on wearing a mid-weight wool hiking sock, but a thinner sock doesn't make the boot feel too large.

I look forward to wearing these on winter snowshoeing and backpacking trips.

Update: I wore these on a short hike since the temperature was 3°F. I was very happy to find that my feet did not get cold at all, even after siting for 30 minutes.

Collin Brewers
4.0 颗星，最多 5 颗星 Boot sizing
2013年11月6日 - 已在美国亚马逊上发表
已确认购买
This is a review solely on the size of the boot, not its quality or longevity since I just purchased them. I have quite a wide foot, size 11, I typically get a size 11.5 or 12 to leave a little room for air and warmer socks. I ordered both those sizes intending to send one pair back through Prime free shipping. I had to send both pairs back and go with a size 13, my toes were just barely touching the end of the size 12. Size 12.5 would have been perfect but not offered. The toe box had enough room for my wide feet, yay! No chafing around the ankle area, I have big ankles. I am a little worried about the lacing system holding up, being anchored by nylon, but on the other hand, there is no metal lacing hooks poking or rubbing the top of my feet either. The insole is flat with no weird bumps, I had to return some Columbia bugaboot boots because of a lumpy insole. No chafing of the back of the foot from sliding up and down while walking. Very comfortable interior in other words. I have a feeling the strap for pulling the boot on will not last long but who knows.

Other observations: the boot is very lightweight and the upper part of the boot is stiff but not uncomfortable, and will break in well I think. Very grippy sole. The boot doesn't feel particularly warm worn indoors but I am not moving much so not generating heat. This is Salomon's warmest boot, but it's no pac boot, lightly insulated and no liner, it's definitely an urban boot. I like the "built up" toe cap on the boot, for one thing it will take more abuse and it gives the boot less of a military look. I like the conservative style of the boot too.
阅读更多
19 个人发现此评论有用

Amazon Customer
4.0 颗星，最多 5 颗星 Consider you probably will be wearing heavy ...
2016年1月17日 - 已在美国亚马逊上发表
已确认购买
I haven't field tested the boots but I have bought with confidence the Salomon brand. These boots run small, I started with size 9.5, then 10 and now the 10.5 is perfect fit. Consider you probably will be wearing heavy wool socks. I wear Salomon XA pro size 10 sneaks and Salomon Quest 4DIIGTX size 9 hiking boot. Happy with all 3 but size is obviously not constant. The Toundra seems a great boot out of the box once you get correct size, Amazon makes that easy for return. Update>>>> I swapped out the insole and replaced it with red hot super feet for better arch support and warmth. Also installed Hotronic S4 custom foot warmer so I will be completely protected for cold weather. I have problems with my feet getting cold and although I haven't field tested these boots in severe cold weather, with new insoles and warmers, the boots are comfortable walking several miles with the dog. Lastly I changed out the factory laces and replaced them with Heavy Duty Kevlar Reinforced Boot Laces/ Shoelaces (Black W/black Kevlar) sold here. Very happy with purchases and confident I will be ready for ADK high peaks and more.
阅读更多
加入亚马逊Prime，从此免运费
亚马逊Prime会员可享海外购美/英/日/德跨境免邮，全年无限次！更有免费无限次阅读电子书服务
> 立即加入
了解我们
合作信息
帮助中心和购物指南