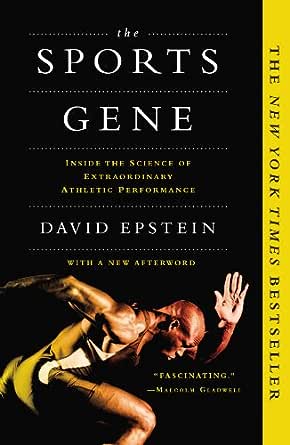 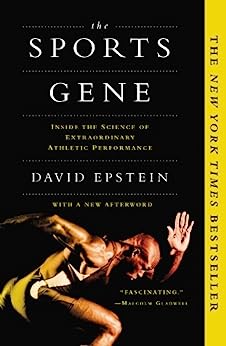 The Sports Gene: Inside the Science of Extraordinary Athletic Performance (English Edition) Kindle电子书

"A wonderful book. Thoughtful... fascinating." -- Malcolm Gladwell, author of Outliers "Provides a powerful and convincing analysis of how genes influence all our lives, especially the careers of elite sportsmen" The Times "A fascinating, thought-provoking look at the leading edge of sports performance, written by a guy who knows the territory. David, besides being a senior writer for Sports Illustrated, was a collegiate runner for Columbia University. More to the point, he's a terrific researcher and a fine, thoughtful writer" -- Dan Coyle, author of The Talent Code "Full credit to David Epstein, a Sports Illustrated journalist with a serious and deep knowledge of genetics and sports science, for his terrific and unblinking new book, The Sports Gene, a timely corrective to the talent-denial industry" -- Ed Smith New Statesman "Endlessly fascinating" -- John Harding Daily Mail --此文字指其他 kindle_edition 版本。

David Epstein is an award-winning senior writer for Sports Illustrated, where he covers sports science, medicine, and Olympic sports. His investigative pieces are among Sports Illustrated's most high-profile stories. An avid runner himself, he earned All-East honours on Columbia University's varsity track squad. This is his first book. --此文字指其他 kindle_edition 版本。

David Warren
4.0 颗星，最多 5 颗星 The title is a puzzle
2018年9月21日 - 已在美国亚马逊上发表
已确认购买
The title implies that there may be a "sports gene" (whatever that combination of words might mean), but the book is serious reportage of the interaction of some kinds of inherited characteristics (presumably expressions of genes) and training that seems to take advantage of them. The first quarter of the book is the most informative and thought provoking. The middle third looks like it might make a very good 200 page book about Kenyan and Ethiopian distance runners, and the book more or less staggers across the finish line with a bunch of random case studies. I discovered many new concepts and was entertained about 3/4 of the time, but guys, there is NO "sports gene" discussed or claimed in the book. Maybe a question mark at the end of the title would improve a buyer's understanding of what the book contains.
阅读更多
9 个人发现此评论有用

Brian LaRocca
5.0 颗星，最多 5 颗星 A Deep Dive into Atheltic Success
2018年7月6日 - 已在美国亚马逊上发表
已确认购买
A great addition to the nature vs nurture debate, this book focuses on specific differences in genetics to analyze how material these effects are on athletic performance. The first third of the book starts a little slow but the reader is well advised to stay with it. Ultimately, the author concludes that a mix of genes, body types and hard work lead to gold medal performance.

The three real strengths of this book are 1) the fascinating examination of how pronounced high achievement clusters around certain ethnic groups 2) how different body types lead to sport specific excellence and 3) how well the author intertwines science with sports narrative to make a very entertaining read.

Examples of 1: In every Olympics since 1980, every finalist in the 100 meters has had West African ancestry. The author hypothesizes that this achievement is due to an adaptation that has mutated the ACTN3 gene to defend against malaria by limiting hemoglobin. This creates an environment great for sprinting but poor for long distances. Or, for long distance running, 17 American men have ever run a marathon in less than 2:10 while 32 Kalenjin men accomplished that mark in October 2011 alone.

2: Kalenjin boys are two inches shorter than Danish boys yet have longer legs creating a better pendulum effect when running long distances. Interestingly, it is thought that long and thin body types are optimal for low latitude, hot and dry environments since it allows for better cooling. Swimmers tend to be taller than sprinters but have shorter legs which allows the body cavity to act as a canoe in the water. In the 2010 NBA season, only two players had shorter arms than their height and the average arm length to height ratio was an abnormal 1.063.

3: Jerome Bettis had his nose broken during a game, had it patched up by having cotton balls inserted in his nose and then had those cotton balls propelled into his stomach after sustaining a vicious hit. Dennis Rodman was let go from his job as an airport janitor and then cleaning cars at an Oldsmobile dealer before a very fortuitous growth spurt.

Reid McCormick
5.0 颗星，最多 5 颗星 maybe practice does not make perfect...
2019年8月9日 - 已在美国亚马逊上发表
已确认购买
So allow me a moment to brag. Among my brothers, I was the most gifted athlete. I made the varsity baseball team my sophomore year and by the end of the season, I was regularly in the starting lineup. Now here’s the chicken-egg question: Was I better because I practiced more than my brothers or did I practice more because I was better?

Obviously, I believe the former, but after I read The Sports Gene, I question if this is true.

How much of our athletic ability is in our DNA and how much can we attribute to hard work? As a meritocratic society, we love rewarding hard work and stories about perseverance. However, this book challenges that thinking. Training has very little physical influence on abilities. You can train your lungs to be more productive, but that training doesn’t match the already superior lung capacity of your opponent.

This is a great book that marries to the subjects of sports and science perfectly.
阅读更多
3 个人发现此评论有用