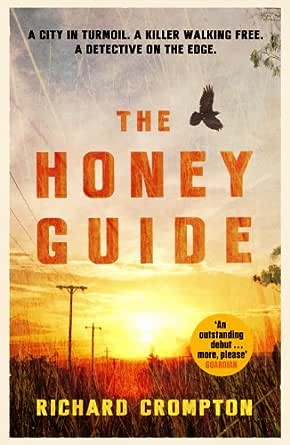 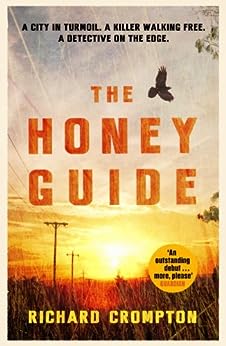 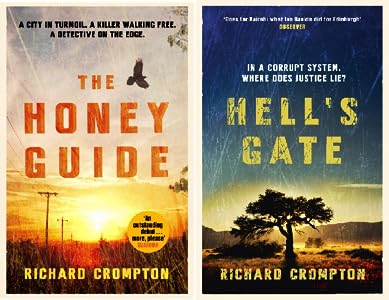 A compulsive whodunnit set in Kenya, where tribal politicscan get you killed (Ian Rankin MAIL ON SUNDAY)

Smashing . . . It will make you long for the next instalment (FINANCIAL TIMES)

The Honey Guide introduces Mollel, a former Maasai warrior...an intriguing figure, famous as the man who pulled dozens of survivors from the wreckage of the US embassy after it was bombed in 1998...Mollel's vulnerabilities gradually unfold, revealing a damaged but determined character who promises to be a fine addition to the ranks of fictional detectives (Joan Smith THE SUNDAY TIMES)

This is a smashing debut, as fleet-footed as the warrior himself. It will make you long for the next instalment (FINANCIAL TIMES)

Crompton brings the streets of Nairobi to life, Mollel and Kiunga, his investigation partner, are strong characters and with the traditions and history of the country integral to the plot, this is an excellent crime series in the making (CHOICE)

Good news for fans of exotic police procedurals, crime fiction's first Maasai detective makes his debut here in what promises to be a series to watch. It is 2007 and Mollel, an outsider in a mostly Kikuyu force, investigates the murder of a woman as riots sweep through Nairobi following claims of corruption and vote- rigging in the Kenyan elections (TIMES SOUTH AFRICA)

A fascinating debut novel set against the turbulent Kenyan 2007 election in which more than 1,500 were killed in riots, this is the first in a series that will bring Nairobi and its colourful citizens vividly to life (Myles McWeeney IRISH INDEPENDENT) --此文字指其他 kindle_edition 版本。

Richard Crompton is an ex-BBC journalist who moved to East Africa several years ago with his wife, a human rights lawyer who worked on the Rwanda genocide trials. Richard won the DAILY TELEGRAPH Short Story Award in 2010.

Aviott John
5.0 颗星，最多 5 颗星 An unusual Cop
2013年3月12日 - 已在美国亚马逊上发表
已确认购买
Mollel. A Maasai policeman. In Nairobi, Kenya. This novel's highly unusual and distinctive milieu is obviously well known and researched. And unlike Alexander McCall Smith's best selling stories about Precious Ramotswe set in Gabarone, Botswana, there's not a hint of the patronizing in the author's attitude to his hard bitten, honest cop in a tough, corrupt neighbourhood. I look forward to more of Mollel.
阅读更多
10 个人发现此评论有用

Keris Nine
5.0 颗星，最多 5 颗星 Kenyan Crime
2013年3月18日 - 已在美国亚马逊上发表
There are now any number of crime and detective series, many of them set in far-flung locations, each of them laying claim to be the exotic equivalent of what Ian Rankin's Rebus novels are to Edinburgh. The best ones - such as the Saudi Arabian setting for Zoe Ferraris' DI Osama Ibrahim novels - make good use of their locations for more than just exoticism and local colour, but manage to create an association between the nature of the incidence of the crimes and the actual culture, traditions and history of the people and the region they are set in. The first of a series of crime novels featuring Maasai detective Mollel, Richard Crompton's The Honey Guide/Hour of the Red God is very specific in its Nairobi setting and period, tying one particular crime very closely in with the ethnic tensions and political unrest that follows in the wake of Kenya's rigged 2007 elections.

Mollel's investigation of the killing and mutilation of a young Nairobi prostitute then doesn't exactly follow the normal crime procedural lines. That's not so much to do with failings in criminal science methods, forensics or lines of communication - although inevitably, things realistically take a little longer than they would in a European or American setting - as much as the difficulties Mollel faces when confronted with class and tribal divisions, particularly as there are suggestions that the mutilation of the woman could be associated with a nasty tribal ritual still carried out in some regions. When it is discovered however that the woman, Lucy, was involved with a rich man of influence, the path seems clearer - there aren't too many rich influential men around - but in reality the case, and the struggle for power in the upcoming election reveals a far more complicated web of intrigue than is at first apparent on the surface.

The location and situation then is more than just a mere backdrop for the investigation, but very much a part of it, the country, its traditions and its troubles defining who the characters are and how they act. Crompton's writing does exceptionally well to make this potentially alien and complicated world very much accessible and understandable to an outsider, but more than that - something essential if the series is to extend further - he creates a compelling figure in Mollel, creating not just a detective with his own personal demons, but one whose nature has distinctive associations to the tradition, history and troubles within the region. Just as importantly, those characteristics and contrasts are brought out in a whole range of colourful characters - like Superglue Sammy, the Mungiki gangsters and in Mollel's investigation partner Kiunga. With such a volatile situation, strong characters and an intriguing crime investigation that draws from and brings out the underlying fears, tension and corruption within the region, this is a promising start to a new detective series that clearly has a lot more potential.

Brett H
4.0 颗星，最多 5 颗星 Interesting and Different Police Procedural
2013年4月5日 - 已在美国亚马逊上发表
This is certainly a police procedural with a difference as we are introduced to Mollel, a Maasai detective who works in Nairobi. Mollel has his own personal demons to contend with, having lost his wife in the embassy bombings some ten years earlier and suffering medical issues, the nature of which are revealed later in the book. The damaged but inspired detective is almost a cliché in modern fiction, but this story is sufficiently different from the run of the mill within this genre to be an interesting and somewhat memorable read.

Mollei and his sidekick, Kiunga investigate the killing of a young Maasai girl whose mutilated body has been found. He has to contend with extremely difficult circumstances as he is operating in an environment of corruption and entrenched interests where the rich and powerful consider themselves to be untouchable. Mollei quickly comes up against barriers of status and influence and has little support even from his superiors within the police force who clearly consider him something of a nuisance and want the investigation dropped.

This tale is set rather vividly against the background of the disputed 2007 elections in Kenya, where corruption and vote rigging by both the government and the opposition was considered to be rife and the elections largely split along tribal lines. The author is clearly very familiar with Nairobi, and the sights and sounds are described so well that the reader can almost believe that he is walking the streets of this teeming metropolis.

The story is narrated in the present tense which, unsurprisingly, initially reads rather awkwardly since it is very difficult to write in that way with a smooth delivery. However, the reader does get largely used to this after a while, though I am unconvinced that it was a good decision to have written in this way. This does take a little while to get into, but one quickly gets caught up in this relatively fast moving tale. The next Mollel mystery will certainly be on my reading list, and I imagine that since we are now familiar with the general background it will be easier to get on board than perhaps was the case with this book.