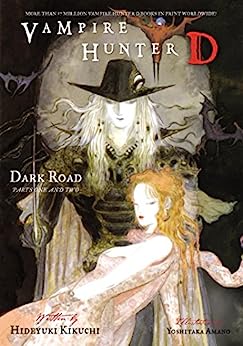 英语版本 Hideyuki Kikuchi (作者), Yoshitaka Amano (插图作者) 格式: Kindle电子书
第 14 卷，共 21 卷：Vampire Hunter D
|
分享
分享 <分享样章>
广告
显示所有 格式和版本 隐藏其他格式和版本
D has crossed over the southern border, into the domain of the cruelest and most evil of the royalty, General Gaskell. On the way, he picks up a "victim" &mdash; one of few survivors in the villages-and makes way with her and the Deliverers. Along the way, he is attacked by the Drowned, and fights many more unspeakably horrible enemies. All of this suggests that Gaskell &mdash; who was supposed to have been put to death under the light of the sun &mdash; is still very much alive. But why?

Joseph91
5.0 颗星，最多 5 颗星 One of the Best; Recommended for D Fans
2010年7月10日 - 已在美国亚马逊上发表
已确认购买
As I've said in other reviews, Vampire Hunter D books are their own thing. By Volume 14, we all more or less know the drill: D is an enigmatic loner who rolls into town, ends up tangled up with a beautiful, troubled young woman, and meets an exotic set of frontier characters and villians. From time to time, he gets hints as to what the "Sacred Ancestor" was up to when he brought down vampire civilization, and when he created D himself. Much more often, characters marvel at how beautiful and awesome D is.

So D is never going to be great fiction, and there are plenty of 3 and 4 star books in my review history that most people would like better. But if you are one of those people, like me, who like the D books, this is one of the best.

This time, D hooks up with Rosaria, this volume's frontier beauty, and with a set of rough and tumble transporters. They run afoul of General Gaskell, a legendary vampire so bad that the other vamps consider him a monster, and a rogue's gallery of other vampires from the past, all of them with exotic powers and their own agendas.

This offers some of the best elements of the D series - spooky, post-apocalyptic atmosphere, wild characters, supernatural fights, and does a much better than usual job of setting up a credible threat to D. As he moves from vamp to vamp, there are moments when you think the bad guys might have a chance, which is pretty rare for D, and makes the fights more interesting.

This is the first two parts of a story that will continue into Volume 15, so the mysteries are still unsolved. Still, I'm interested, and that's awefully impressive, fourteen volumes in.

M. Orellana
4.0 颗星，最多 5 颗星 D in Danger
2013年11月8日 - 已在美国亚马逊上发表
已确认购买
Coming off of Pale Fallen Angel and Twin Shadowed Knight, the Dark Road series is not as breathtaking as its immediate predecessors. Still an entertaining read, and a nice display of misdirection in the narrative. We get to hear about some legendary Nobles with a penchant for murdering their own kind--one thing Kikuchi never fails to deliver on is interesting characters, and this series is chock full of them.
阅读更多

Joanne M. Knoche
5.0 颗星，最多 5 颗星 vampire hunter d 14
2010年7月14日 - 已在美国亚马逊上发表
已确认购买
oh wow these book and series keeps getting better and better with each volume. i have to say i am waiting on my edge of my seat to buy the next episode in August is when i comes out i think. i want see what happens next with D and the other characters.Very worth the read.
阅读更多
3 个人发现此评论有用