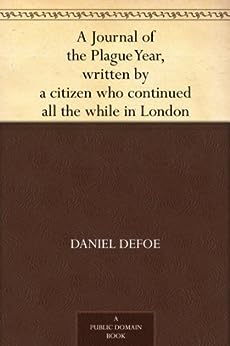 A Journal of the Plague Year, written by a citizen who continued all the while in London (免费公版书) (English Edition) Kindle电子书

发售日期: 2012年12月13日 | 系列: 免费公版书
This book was converted from its physical edition to the digital format by a community of volunteers. You may find it for free on the web. Purchase of the Kindle edition includes wireless delivery.
显示更多
显示更少

Kindle Customer
4.0 颗星，最多 5 颗星 One Year Near the Gates of Hell
2016年8月11日 - 已在美国亚马逊上发表
已确认购买
A number of the Amazon commenters have provided very good reviews of this work. The review by Rick Skwiot from July 5, 2010, is extremely detailed and well written; I recommend it highly. I shall mention only a few aspects of this work that surprised and intrigued me.
The work is classified as a “novel” and is discussed in most reviews as a work of fiction. It is a work of fiction in the sense that the first person narrator is a fictional person (probably based on Defoe’s uncle) because Defoe, himself, would have been only 5 years old in 1665 at the time of the Great London Plague. However, it is a well-researched report of a historical event through fictional eyes. I believe that the anecdotes and events reported were for the most part real and developed based on detailed interviews with survivors of the event and on contemporary records. I would classify the work more as a “non-fiction novel,” somewhat in the nature of Truman Capote’s “In Cold Blood.” Capote claimed that “non-fiction novels” do not include first-person viewpoint. Well, this was well before Capote’s time, and Defoe’s work may take precedence over Capote’s pontification.
Defoe continues to write in his essentially simple, but detailed and informative style. The journalist states a number of times that he intends the journal to be of assistance to understanding how to deal with such an event if it should recur. The journalist is at times repetitive and the work includes far too much detail of “death and disease” statistics for a 21st century reader; but at the time the work was published these would likely have been of interest to readers and certainly of interest to any future reader using the book as a guide to dealing with a similar event.
One oddity of the book – there are no chapter or section divisions; the largest subdivision of the text is paragraphs. Another oddity of Defoe’s style, he uses the phrase “I say” as a kind of intensifier or conjunction quite frequently, especially early in the book. I’ve not seen this done by any other writer; but Defoe frequently used it as a device to remind the reader that he is continuing on a thought that he started several lines earlier. I found it an interesting literary device that causes the writer to seem more as if he is speaking directly to the reader.
It is clear from Defoe’s descriptions that a vast majority of the populace and the physicians all generally considered spread of the plague to be an infection or contagion that went from one person to another by some physical means, possibly by exhalation or body odors, possibly by body fluids, possibly by materials handled by a diseased person, etc. They did not consider the disease to be caused by something ambient in the air or caused by an act of divine providence upon specific individuals. So, their expectation would be that a completely isolated person or family would be safe from the disease. With this understanding, it is somewhat surprising to me that physicians or other scientists of the time did not figure out that the vector for the plague – if it was indeed bubonic plague, as generally attributed – was vermin of one sort or another. They would not have had the knowledge to correctly assign the root cause to bacteria carried by fleas; however, it seems to me that they should have had the capability to figure out that the vector was fleas on rats or other small rodents or, if not the fleas, then at least the animals themselves. Yet, this connection was never made or even suggested.
Significant parts of the journal describe the plight of the working poor during this crisis. With the wealthy fleeing the city and many businesses closing, the individuals who worked daily for their bread lost their normal source of income and ability to buy food. The journalist gives high praise to the Lord Mayor of London and his Aldermen for their management of this aspect of the crisis.
The book is well worth the time it takes to read.

Bob in Richmond
5.0 颗星，最多 5 颗星 FASCINATING ACCOUNT OF THE PLAGUE IN LONDON
2013年7月17日 - 已在美国亚马逊上发表
已确认购买
If I can use a word learned in a college sociology course, temporocentrism makes any generation look at past generations as dull, possibly dim-witted and otherwise not too bright. But this is how we got where we are, i.e. building on the accomplishments of the past, a step at a time.

From this book you learn how people dealt with the Plague, what they did to stop its spread despite knowing nothing of what caused it, their outlooks on life and death before and during the Plague and, most importantly as this work indicates, the intelligence of people at the time which is no different from people now. They used what they had to work with, plain and simple.

What is also interesting is the society's response to the plague, what the government, such as it was, did to aid the victims and what the many private individuals did in the way of charity, which saved countless lives. The book is a fascinating window into a frightening past.
阅读更多
3 个人发现此评论有用

lacey gal
5.0 颗星，最多 5 颗星 The "Man on the Streets" view of the plague.....
2014年8月9日 - 已在美国亚马逊上发表
已确认购买
Ok, so you really want to have an idea of what London looked like during the plague -- this is where to go!!! Well written and easy to follow -- but the detail of the lives makes your imagination soar!! Not given to the horrific, but gives glimpses to the fact that there was a lot more than disease happening. What would we do should a plague break out? This book lets you know that most of the lengths people went to to not get ill were in vain!! A time where general hygiene was not in the picture, still makes you wonder if all our modern day knowledge could have done much better with a wild break out such as this!! This is the "man on the streets" view - literally, as he did indeed roam the streets to see what all he could see!! Well written and very, very interesting!!!
阅读更多
2 个人发现此评论有用

Customer Review
5.0 颗星，最多 5 颗星 Very interesting book.
2016年12月9日 - 已在美国亚马逊上发表
已确认购买
While this book is technically fiction, it is quite factual. A good book to read along with it is Historical Sources of Defoe's Journal of the Plague Year by Watson Nicholson, published 1919, available from the Columbia College of Physicians and Surgeons at archive.org.
阅读更多
2 个人发现此评论有用

Old Gordo
3.0 颗星，最多 5 颗星 This book is a NOVEL
2019年1月24日 - 已在美国亚马逊上发表
已确认购买
The cover is very misleading; this book is a novel. Defoe was only 5 years old when the plague of 1665 hit. He wrote the novel as an adult to wake up complacent Londoners about a new plague threat. I found the text to be too often repetitive. He made a couple of points about four or five times each. In parts it was interesting, revealing views from that era.
阅读更多
加入亚马逊Prime，从此免运费
亚马逊Prime会员可享海外购美/英/日/德跨境免邮，全年无限次！更有免费无限次阅读电子书服务
> 立即加入
了解我们
合作信息
帮助中心和购物指南