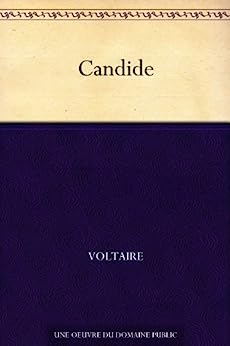 On August 1, 1925, Bennett Cerf and Donald Klopfer began their legendary publishing partnership by purchasing the Modern Library from Boni and Liveright. Two years later, they decided to publish a few books on the side, "at random." The first book released under the Random House imprint was Voltaire's Candide, every page wittily illustrated by Rockwell Kent. For years, rare-book collectors have treasured the 1,470 copies of the original edition. Now, the Modern Library releases a facsimile of the first Random House edition, a masterpiece of both literature and bookmaking. The Modern Library edition reproduces many elements of the original, including case stamping and the unique Kent-designed two-color endpapers. --此文字指其他 kindle_edition 版本。

From Gita May's Introduction to Candide

During his stay in England and at Cirey Voltaire's outlook on life was essentially optimistic. In the twenty-fifth and last of his Lettres philosophiques he sternly took Pascal to task for his pessimistic depiction of the human condition, describing him as a "sublime misanthrope"; and in his poem Le Mondain (The Worldly One), published in 1736, he sharply ridiculed the myth of primitive happiness and innocence during the co-called Golden Age, as embodied in the biblical story of Adam and Eve. Conversely, he extolled the Epicurean delights of comfort and luxury brought about by modern civilization. In spite of his controversial reputation, he garnered such high official honors as being elected to the French Academy in 1746. He was still convinced that, on the whole, Newton's eminently rational laws permitted human beings to accommodate themselves and seek their happiness within this orderly universe, set in motion by a supremely powerful but also benevolent being. And as a deist, he generally also subscribed to Gottfried Wilhelm Leibniz's theory that God would not create a universe other than the best of all possible universes, as expounded in his Theodicy (1710).

Voltaire's stay at the court of Frederick II, from 1750 until 1753, turned out to be an unmitigated disaster. Frederick was basically an autocrat, in spite of his much-publicized image as an enlightened "philosopher king." Voltaire's irrepressible wit and bold irreverence were bound to displease and eventually anger his royal host, and eventually Voltiare had to leave Prussia hurriedly and under humiliating circumstances. After some hesitation as to where to find a safe refuge, he settled down in Geneva in December 1759, when he moved to a property he acquired at nearby Ferney, which would be his retreat for the next nineteen years, until shortly before his death in Paris, on May 30, 1778.

Voltaire's early optimism underwent a profound change under the impact of events in his personal life as well as in reaction to those natural and man-made catastrophes that made him keenly aware of human suffering and misery, not to mention the multiple danger that constantly threaten our very existence, let alone our well-being and chances of achieving happiness. His own disappointments-notably the unexpected loss of Madame du Châtelet, the unrelenting hostility of the court of Louis XV, the disenchantment with Frederick, and the precariousness of his personal situation-were compounded by his intense and immediate empathy; he spontaneously identified with all victims of calamities, war, injustice, prejudice, and intolerance.

The news of the terrible Lisbon earthquake of November 1, 1755, which claimed tens of thousands of lives, overwhelmed him with dreadful images of women and children buried under the rubble, and inspired his eloquently anguished Poème sur le désastre de Lisbonne (Poem on the Disaster of Lisbon), published in 1756, in which he clearly signals his rejection of Leibniz's concept of a rational and well-regulated universe. The protracted and devastating Seven Years War (1756-1763), which began when Frederick invaded Saxony and soon expanded the lingering hostilities between France and England into a European conflagration, also deeply affected Voltaire's outlook on the human condition.

Voltaire began writing philosophical contes (tales) relatively late in his career and almost as an afterthought, for he subscribed to the neoclassical canon and hierarchy of literary genres according to which tragedy in verse and epic poetry gave an author his most reliable passport to posterity and immortality. Novels, short stories, and contes were looked upon suspiciously as upstart genres with no credible aesthetic or even moral pedigree.

Voltaire began with the traditional short story or novella, and transformed it into the conte philosophique, or philosophical tale, a fast-moving and highly entertaining story combining multiple adventures and voyages with an underlying philosophical and moral theme, written in a pithy style replete with humor, satire, irony, and sly sexual innuendoes. Indeed, ridicule would be Voltaire's most effective weapon against his main targets: fanaticism, intolerance, war, and cruelty.

One of Voltaire's early philosophical tales is Zadig, subtitled La Destinée (Destiny), which appeared in 1747. It is set in the kind of whimsically imaginary and exotic Oriental setting dear to eighteenth-century authors from Montesquieu to Diderot. The uncannily wise, resourceful, and resilient Zadig, whose name derives from the Arabic sadik ("just"), undergoes a number of trials and tribulations, and when faced with disconcerting instances of injustice and suffering, and with the unpredictability and apparent randomness of life in general, anxiously questions and even objects to the notion of a world regulated by a benevolent Providence. But Zadig eventually overcomes adversity and reluctantly submits to the reassuring belief that Providence works in mysterious and unfathomable ways for the ultimately greater good of humanity.

While still in Prussia, Voltaire published Micromégas in 1752. Partially inspired by Swift's Gulliver's Travels (1726) and by Cyrano de Bergerac's two fantastic romances about visits to the moon and sun-Autre Monde: ou, Les Estats et empires de la lune (1657) and Les Estats et empires du soleil (1662)-it is a science-fiction story of fantastic, humorous interplanetary travel that strongly reflects Newton's cosmology and Locke's empiricism, and that pointedly resorts to fictional and comic devices in order to fuse science and moral philosophy. In a universe of multiple planets inhabited by creatures of various gigantic dimensions, the remarkable scientific knowledge of the miniscule earthlings is duly acknowledged, but at the same time their basic ignorance in matters of ultimate human values, masked by hubris and pedantry, is pointedly ridiculed and excoriated, especially when viewed from the perspective of two extraterrestrial visitors, Micromégas, the giant originating from Sirius, and his smaller but still huge traveling companion, whom he had picked up on the planet Saturn in the course of his celestial peregrinations.

Candide, the hero of the philosophical tale by that name, came into the world in January 1759 unacknowledged by his creator. The work was proposed as a translation "from the German of Doctor Ralph, with the additions found in the Doctor's pocket when he died at Minden, in the Year of Our Lord 1759." It was customary for Voltaire to deny the paternity of his most potentially controversial writings by mischievously attributing them to imaginary or even real persons to maintain a near total silence about the circumstances and composition of his works of prose fiction.

Voltaire was hardly an introspective author, and in this, as in so many other respects, he stands at the opposite pole from Jean Jacques Rousseau, who insisted, in full knowledge of the dangers involved, on publicly proclaiming the authorship of all his writings and who in both his Confessions (1781, 1788) and correspondence provides much detailed information on their genesis, publication, and immediate public response, as well as official reaction.

Another explanation for Voltaire's reticence about his philosophical tales is his understandable if mistaken belief that these were relatively inconsequential productions belonging to the much decried and maligned genre of the novel, and that they would not fare well with future readers, especially when considered alongside his far more ambitious and serious works-his tragedies, epic and philosophical poems, and historical essays. Whatever Voltaire's own motives or thinking about Candide may have been, there is a persistent but erroneous legend that he dashed off by dictation the thirty chapters of the tale in three days. In is of course far more likely that he wrote Candide over a ten-month period in 1758 and completed the manuscript, with final revisions and additions, in the fall of that year.

The slender book first came off the presses of the brothers Cramer, publishers in Geneva, in January 1759. It was promptly disseminated and repeatedly republished in Paris and elsewhere. Even though it was swiftly condemned by both French and Swiss authorities, and copies were seized in printing shops in Paris and Geneva, it sold briskly under the counters. No official effort to suppress Candide could prevent it from becoming one of the most sensational forbidden best-sellers of pre-Revolutionary France and indeed Europe. Within a year, there were at least three English translations and one edition in Italian.

Voltaire (Francois-Marie Arouet) (1694--1778) was one of the key thinkers of the European Enlightenment. Of his many works, "Candide" remains the most popular.
Peter Constantine was awarded the 1998 PEN Translation Award for "Six Early Stories "by Thomas Mann and the 1999 National Translation Award for "The Undiscovered Chekhov: Forty-three New Stories." Widely acclaimed for his recent translation of the complete works of Isaac Babel, he also translated Gogol's "Taras Bulba" and Tolstoy's "The Cossacks "for the Modern Library. His translations of fiction and poetry have appeared in many publications, including "The New Yorker, Harper's," and "Paris Review. "He lives in New York City.
--此文字指其他 kindle_edition 版本。
阅读更多

Reinold F.
5.0 颗星，最多 5 颗星 Delightfully rebellious. (AmazonClassics Edition)
2020年4月25日 - 已在美国亚马逊上发表
已确认购买
Literature or philosophy? it tells a great story but clearly it goes beyond or aside satire, it tells philosophic ideas but in order to dismantle them. It is rather a manifiesto against the mad resignation to believe this world the best possible instead of working it till achieving a really good world.

I deem "Candide" as one of the best books from France, which is to say a lot. Few books leave a life lasting impact as this seemingly superficial book. And if not, if you read it as literature, is quite entertaining. Usually utopias are hateful parodies to attack the country of the resentful writer but devoid of alternatives of solutions. In "Candide" Voltaire instead genuinely have a rich imagination to build the secret El Dorado of the Incas. I have walked Machu Picchu and I felt the Incas of Voltaire wouldn't be our of place in that marvelous city. Candide is... well, candide :D his odyssey will shatter his simple view of the world. It could shatter yours too, an excellent reading.

The AmazonClassics edition is good but not perfect. It has no errors, nor mistakes, is comfortable to read; but the translation is an old one from the public domain. A good translation but it adds an unnecessary introduction; besides is not clear the year of publication and number of edition.
阅读更多
7 个人发现此评论有用

R. Glueck
5.0 颗星，最多 5 颗星 Frolicsome and Feisty!
2016年7月2日 - 已在美国亚马逊上发表
已确认购买
I first saw the musical adaptation of "Candide" on Broadway, in the 1970's, and loved it. I decided to do it justice by reading Voltaire's original novel, and lo! The book has an entire story well beyond the musical adaptation! I found it to be not only instructive, nut enlightening, with a message that applies to the modern world as well. It is funny, pitiful, and a fast read, worthy of any educated individual, especially in our senior years.
Recommended.
阅读更多
28 个人发现此评论有用

Twostory
2.0 颗星，最多 5 颗星 Not for me
2020年8月4日 - 已在美国亚马逊上发表
已确认购买
I know it's a "Classic" but I don't get it. Lots of traveling around in a dark period of time in the world. Repetitive violence and misdeeds towards mankind. Much murder and abuse of women and children. So much so It was boring to me. Events happened too fast. Sometimes too much detail - sometimes too little. I don't understand the fascination and reputation this book gets. I gave up halfway through.
阅读更多
8 个人发现此评论有用